A week ago, I got my first dose of the Moderna COVID-19 vaccine.  I was lucky enough to have the opportunity because I work part-time for a home health agency providing companion care to homebound seniors, and even though I'm currently furloughed because of the pandemic I still qualified -- and I certainly wasn't going to turn it down.  I'm happy to say that all I had as a side effect was some very minor arm soreness the next day, but otherwise, it was no big deal.

However, my mentioning this to a friend prompted an immediate concerned eyebrow-raise.  "Didn't you hear that the vaccine is being used to implant 5G surveillance microchips?" she asked me.  "You're not worried?"

I reassured her that no, I wasn't worried, and in any case if the FBI wants to surveil me, they can knock themselves out because it would be the most boring surveillance job ever.

First FBI Agent: I thought this guy was a writer?

Second FBI Agent: Supposedly he is.  Have you seen him actually write anything?

First FBI Agent: Well, four days ago he added three lines to his manuscript, deleted two of them, then told his wife that evening he'd been "very productive."

Secondly, even if I was up to no good, I'm not really that confident the FBI would catch on.  These are the same people who had several days before the Capitol riots where the far right was posting stuff all over Parler like, "Wow, that's really some riot we have planned for the Capitol on Wednesday, January 6, isn't it?" and "Here's a list of the people who are signed up as drivers when we go to the riot where we intend to break into the Capitol and threaten lawmakers" and "Here I am in my home at 512 Swamp Hollow Road, East Bunghole, Tennessee, planning to riot in the Capitol!  I bet the FBI will never know!" and still claimed they didn't have enough warning to prevent it.  And they took days afterward to start arresting people despite the fact that numerous rioters took selfies and videoed themselves breaking shit and vandalizing the place, and then posted them online.

Of course, the fact that the rioters did that sort of thing points to general low intelligence on their part, too.  I'm not saying I'm any kind of genius, but I do know that if I was inclined to break the law, I would not video myself with my phone and post it to my Twitter with the hashtag #CriminalActivityFTW.

Anyhow, I tried to explain to my friend that there's no way you could inject a microchip via a vaccine, and she said she'd "seen it online" and that "they said it was possible."  So I said as gently as I could that it was an unfounded conspiracy theory, but that I'd look into it, and with a very small amount of digging found out that one of the most widely-circulated claims showed a circuit diagram alleged to be of the top-secret injectable microchip, but turned out to be the circuit diagram for a Boss Metal Zone MT-2 guitar distortion pedal where they'd cropped out words that would have been a dead giveaway, like "treble" and "bass" and "volume" and "footswitch."

Just for the record, I can vouch for the fact that the nurse who gave me the COVID-19 vaccine did not inject me with an electric guitar pedal. 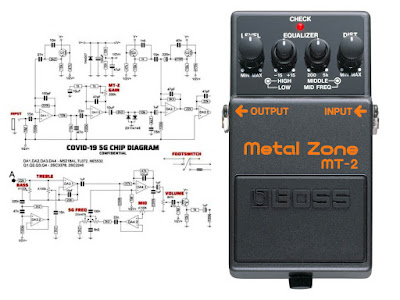 You know, what strikes me about all this is that the caliber of conspiracy theories has really been going to hell lately.  They're not even trying to make them plausible any more.  Back in my day, you had your Faked Moon Landing Conspiracy and your Hollow Earth Conspiracy and your Roswell Alien Conspiracy and your The CIA Killed JFK Conspiracy, which were quality.  Now?  With QAnon in charge of our conspiracies, we're being told that a pizza parlor with no basement has a pedophilia ring operating out of its basement.

So I'm issuing a challenge to you yahoos to up your game.  I mean, really.  Is this the best you can do?  Because if it is, I want a refund.

But now I better wind this up and get back to watching funny dog videos.  This novel isn't gonna write itself, and besides, I gotta make the guys in the FBI surveillance van earn their paycheck.

******************************************
As a biologist, I've usually thought of myself as immune to being grossed out.  But I have to admit I was a little shocked to find out that the human microbiome -- the collection of bacteria and fungi that live in and on us -- outnumber actual human cells by a factor of ten.
You read that right: if you counted up all the cells in and on the surface of your body, for every one human cell with human DNA, there'd be ten cells of microorganisms, coming from over a thousand different species.
And that's in healthy humans.  This idea that "bacteria = bad" is profoundly wrong; not only do a lot of bacteria perform useful functions, producing products like yogurt, cheese, and the familiar flavor and aroma of chocolate, they directly contribute to good health.  Anyone who has been on an antibiotic long-term knows that wiping out the beneficial bacteria in your gut can lead to some pretty unpleasant side effects; most current treatments for bacterial infections kill the good guys along with the bad, leading to an imbalance in your microbiome that can persist for months afterward.
In The Human Superorganism: How the Microbiome is Revolutionizing the Pursuit of a Healthy Life, microbiologist Rodney Dietert shows how a lot of debilitating diseases, from asthma to allergies to irritable bowel syndrome to the inflammation that is at the root of heart disease, might be attributable to disturbances in the body's microbiome.  His contention is that restoring the normal microbiome should be the first line of treatment for these diseases, not the medications that often throw the microbiome further out of whack.
His book is fascinating and controversial, but his reasoning (and the experimental research he draws upon) is stellar.  If you're interested in health-related topics, you should read The Human Superorganism.  You'll never look at your own body the same way again.
[Note:  if you purchase this book using the image/link below, part of the proceeds goes to support Skeptophilia!]