I've always had a fascination for optical illusions.

The enjoyment of bizarre trompe-l'oeil is connected to a persistent theme in my fiction; how do we know what's real?  If something occurs that challenges our notions of how things are, by what criteria could we know if we're seeing reality -- or if it's a malfunction in our frequently errant sensory-perceptual systems?

My favorite optical illusions are ones where even once you know what's going on, your mind just won't accept it.  Our brains, apparently, are very prone to hanging on to a solution to a perceptual anomaly even once it's been conclusively demonstrated that they've got it wrong.  The best example of this I know of is the checker shadow illusion: 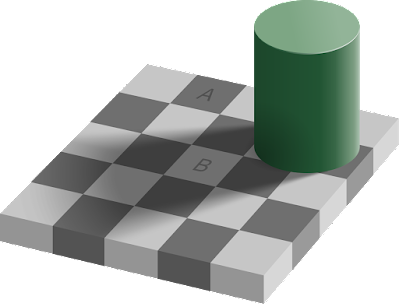 In the above image, which square is darker, A or B?

If you know anything about optical illusions, you've probably guessed that they're the same darkness, and you'd be right if you did.  But I'd bet cold hard cash that even once you know the two squares are the same darkness, you can't actually see it that way.  (In fact, if you doubt they are of equal darkness, use some scraps of paper to cover up everything but a vertical strip of the image, to eliminate the green cylinder and most of the checkerboard.  The fact that they're the same will be obvious.  Then remove the paper, and voilà -- you'll be back to seeing A as darker than B.)

Another fine example of this phenomenon is the hollow-face illusion, which seems to occur because our brains have a finely-developed ability to see nuances of other human faces, but the concept of an inside-out face is so far out of anything we typically experience that we just can't process it.  Check it out:

A lot of optical illusions have to do with the fact that we often interpret what we see based upon comparisons, and those comparisons persist even once we know they're inaccurate.  (That's the key to the checker shadow illusion; because we think square B is in shadow, it must be intrinsically lighter in color than square A.)  It's also what made the infamous blue dress/white dress illusion so maddening; apparently it works because we judge something's color not only by the intrinsic frequencies of the light striking our eye, but by comparison to the color(s) surrounding it.  So someone who focuses on one part of an image and judges the rest of the image based upon that will come to a different conclusion than someone who does the same thing but starting with a different part of the image.
A lot of size-based illusions work in a similar fashion, such as the Ebbinghaus-Titchener illusion, in which the question is to determine which of the two orange circles is larger: 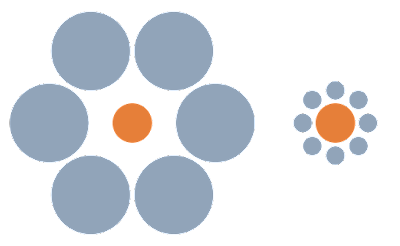 You've undoubtedly already guessed that they're the same size, but it's a remarkably persistent illusion even when you know that.  The right-hand circle looks larger because we're judging its size by comparison to the small dots surrounding it; and the opposite holds for the left-hand circle.

The topic of optical illusions comes up because of a cool study out of La Trobe University (Australia), led by psychologist Sarah Byosiere.  Byosiere became interested in optical illusions a few years ago, and wondered whether humans' advanced brains made us fall for them more easily -- we're always calculating, comparing, weighing options, which brings with it some pitfalls -- and whether other animal species might not be fooled.

So she decided to test dogs.  Using copious amounts of dog cookies, she trained some dogs to interact with a touch screen, rewarding the dogs if they touched their noses to the larger of two circular shapes shown.  Once they got good at it, she threw the Ebbinghaus-Titchener illusion at them.

And they fell for it.  Apparently dogs think the right-hand circle is larger, too.

What's even more fascinating is that dogs didn't fall for the Delboeuf illusion... 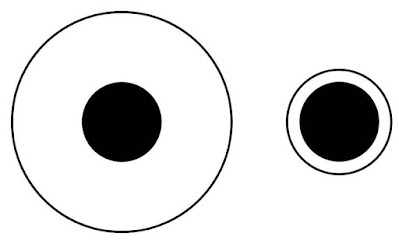 ...which you'd think would work precisely the same way.  Getting tricked by the Delboeuf illusion is apparently pretty ubiquitous in humans, which is why restaurants have discovered that a medium-sized entrée looks like a more generous serving in a small plate than in a larger one.  But dogs presented with two plates of food, which differ in the plate size but not in the quantity of food, showed no preference whatsoever for the smaller plate.

As a side note, however, I do wonder if the apparent failure of dogs to get taken in by the Delboeuf illusion isn't because of faulty experimental design.  I know my own dogs don't seem to respond to portion size in their (equal-sized) food bowls.  I can fill one to overflowing and put only a handful of kibble in the other, and my dogs will generally go for whichever bowl is closer.  "Oh, well, I can always go for the other bowl once I'm done with this one," seems to be their general attitude, along with "Any food is a good thing."

Byosiere and her colleagues have expanded their research into other illusions, and I encourage you to go to the link I posted and check out what she and others have done.  She's also started a citizen-science effort called “What the Fluff!?” to study how animals respond to an illusion you probably have seen on YouTube -- where a pet owner holds a sheet up in front of them, and drops the sheet while simultaneously ducking out of sight, and seeing how the pets respond to their owners' apparent vanishing act.  "We’re asking owners to do this at home with their dogs," Byosiere said.  "We’ll be analyzing the footage and seeing if we can make any conclusions about object permanence and violation of expectation in that kind of magic trick."

So if you're inclined, try playing some mind games with your pets, and send her your results.  I may try it with my dogs and see what happens.  My guess is Guinness might fall for it and try to figure out what happened, but our hound Lena, who shows the level of energy and intelligence usually associated with a plush toy, would probably not notice if I mysteriously vanished.  Or if she did notice, she'd kind of shrug and go, "Oh, well, I'm sure he'll be back at some point" and resume the very important nap she'd been taking before I started bothering her.

Either way, it might be interesting to see how they respond.  If you try it, let me know in the comments section what your results were.  And now, I'm off to play a round of Confuse-a-Dog.