I love a good mystery.  There's something about the phrase "there's something going on here, but we don't know what it is" that immediately makes my ears perk up.  And for someone of that bent, there's no field like astrophysics.

The whole science of astrophysics is a relatively new invention.  Astronomy, of course, has been around for millennia; there are complex star charts made by Chinese astronomers that date back to the eleventh century, and our observations of the constellations and planets goes back to the time of the Babylonians.

We've been looking up for a long, long time.

The problem, of course, is that looking at the stars from a distance is one thing, but finding out anything about what they actually are when we can't physically go there is quite another.  Even finding out what they're made of was a baffling question with no obvious answer.  Up until (very) recently, our best telescopes weren't sufficient to see any detail at all on even the largest stars; even through the Mount Wilson Observatory Telescope they just look like points of light with no discernible features whatsoever.

The first step toward seeing more than that came from research by German physicist Joseph von Fraunhofer in the early nineteenth century, when he invented the spectroscope -- basically a very well-made prism -- and found that in the light from the Sun there were dozens of dark lines (now called Fraunhofer lines in his honor).  Fraunhofer himself died at the young age of 39 without ever finding out what caused them -- poisoned by vapors from the heavy metals he used in his profession as a glassmaker -- but the research was taken over by Gustav Kirchhoff and Robert Bunsen, who showed that the lines were the absorption spectra of specific elements.  Basically, these lines occurred in the light emitted by a heated, glowing gas mixture, and could be used to identify what elements were in the mixture.  In fact, it was through its unique spectral fingerprint within the solar spectrum that British astronomer Norman Lockyer discovered the element he christened helium (after Helios, the Greek sun god) -- the first element that was identified out in space before it was detected here on Earth.

What this did was allow us to study the stars at a distance.  Their spectra told us for certain what stars thousands of light years away were composed of.  Through this new science of astrophysics we found out that most of the ordinary matter in the universe (96%, in fact) is hydrogen and helium; all of the other familiar heavier elements put together make up the other 4%.  It also led directly to the discovery of the expanding universe and the Big Bang when astronomer Edwin Hubble found that the familiar spectral lines of hydrogen in distant stars were red-shifted -- stretched out in the same fashion that the sound waves of a passing train get stretched, lowering the pitch as it passes you.  And it turns out that unlike trains, galaxies have a peculiar relationship between their distance and their speed.  The farther a galaxy is away from us, the more the spectral lines get red-shifted, so the faster it's moving.

The result: the universe is expanding, meaning at one point 13.8 billion years ago, it was coalesced into a single point.  All that, from the lines produced when you heat something hot enough to emit light.

Anyhow, all of this comes up because of a new discovery that has the scientists scratching their heads.  Astrophysicists Anna Kapinska and Emil Lenc were analyzing images from the Australian Square Kilometre Array Pathfinder (ASKAP) telescope, and found ghostly rings of radio emission that have no known source.  Here's one of them, dubbed ORC-1 ("odd radio circle"): 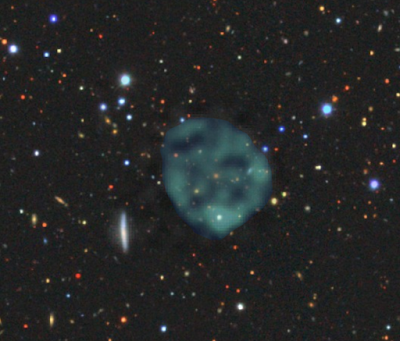 In an amusing parallel to the famous (and still unexplained) "Wow!" signal -- a narrow-band radio signal discovered in 1977 and so named because astronomer Jerry Ehman was so taken aback when he found it he wrote "Wow!" in the margin of the printout -- these ORCs have become known as "WTFs" because that's what Kapinska wrote on the photo of the first one she found.  Since then there have been dozens of WTFs found, and they still have no convincing explanation.  There doesn't seem to be anything at the center, such as the pulsars found in the middle of nebulae that are supernova remnants; they aren't star-formers like the Orion Nebula; and they don't show the spectral distortion you see with gravitational lensing, when a distant light source has its light warped around a massive object between it and us.
In short, we still have no idea.  Two Russian scientists have actually (seriously) suggested that we might be looking down the maw of a wormhole -- a thus-far theoretical astronomical object linking two different places in space-time, made famous by Star Trek: Deep Space Nine.  But that explanation is pretty out there (literally and figuratively), and to be scrupulously honest, at the moment they're still just... WTFs.
So once again, we have a demonstration that however far we've come from our ancestors looking up at the skies and seeing dogs and bears and scorpions and so on, we still have a long distance to cover before we'll have a convincing explanation of whatever we see up there.  I, for one, find that thrilling.  If in the past two centuries we've gone from stars being points of light to being able to detect and analyze radio emissions from billions of light years away, where will we be in another two hundred years?  And during that time, how many mysteries will cause scientists to say "WTF"?
Boggles the mind.
*******************************************