Is it just me, or do you sometimes get the feeling that people want catastrophes to happen?
I see it every time there's a near pass of an asteroid.  Hysterical notes start showing up all over social media about how "this time it's for real" and "we better get ready" and "make your peace with God" and "how 'bout a planet-sized game of Whack-a-Mole?"  Then, when the asteroid misses by a significant margin -- amazingly enough, just as NASA predicted -- people seem somehow disappointed.
Dammit, they say.  Maybe next time will be the fiery cataclysm I've been so looking forward to.
This comes up because I'm once again seeing all sorts of buzz about the Yellowstone Supervolcano, and how the state of Wyoming is about to get blasted into the stratosphere.  Now, to be fair, Yellowstone is an active volcanic area, and previous eruptions have been pretty stupendous.  One that occurred 640,000 years ago blew a thousand cubic kilometers of rock, ash, and pyroclastic debris into the air -- for reference, this is about a thousand times larger than the amount of ash from Mount Saint Helens -- and the resulting fallout blanketed most of what is now the central United States.
I know 640,000 years seems like a long time, but it's not much geologically, and geologists consider another large caldera eruption from Yellowstone a sure thing.  Here's where the problem starts, though, because "a sure thing" doesn't mean "next Tuesday at 4:30 PM."  What it means is that there'll be an eruption some time in the next 100,000 years, give or take, and (this is the critical part) we're seeing no sign of it being any time soon in human terms. 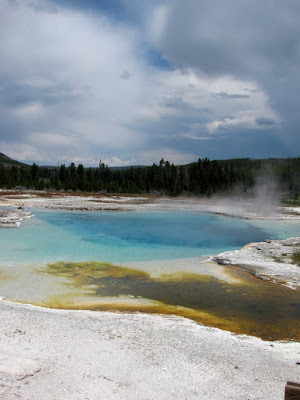 Sapphire Pool, Grand Prismatic Spring Complex, Yellowstone National Park.  The deep blue water in the center is about 90 C and has a pH of 9.  Swimming not recommended.
The pro-cataclysm cadre got their push this time because of an announcement that the Steamboat Geyser has resumed regular eruptions after a three-year quiescent phase.  To be sure, Steamboat is pretty spectacular; its column of hot water and mud is one of the highest ever measured, jetting up to 115 meters into the air.  So having it start up again suddenly after not erupting since early 2018 is understandably going to raise some eyebrows.
What it doesn't mean, however, is that the entire caldera basin is going to go kaboom, as it did 640,000 years ago.  All it means is that underground hotspots come and go in volcanically active regions, and the plumbing system that powers geysers and hot springs shifts around sometimes.  Geologists are seeing no signs of magma movement, which would be the precursor to an actual volcanic eruption.
They're pretty curious, though, about why Steamboat has reactivated so suddenly.  One possibility is that because water in geysers and hot springs is usually laden with dissolved silica and other minerals, a slight fluctuation in temperature can cause a sudden precipitation of crystalline material (in fact, the shorelines of the Yellowstone hot springs are coated with the stuff).  This could, literally, clog the pipes and cause the pressure to release elsewhere, or to build up until it's sufficient to blast the clog to pieces.  In short, we're not sure why Steamboat is active again, but it's virtually certain it's not an imminent eruption.
Honesty compels me to use the word "virtually," and even Michael Manga of the University of California-Berkeley, who is leading the study of Steamboat Geyser, says we can't really be certain of the timing of volcanic eruptions.  After all, massive eruptions are so infrequent that we haven't had all that many opportunities to study the lead-up and see what would be the typical seismological warning signs.  "What we asked are very simple questions and it is a little bit embarrassing that we can't answer them, because it means there are fundamental processes on Earth that we don't quite understand," Manga said.  "One of the reasons we argue we need to study geysers is that if we can't understand and explain how a geyser erupts, our hope for doing the same thing for magma is much lower."
So as befits a cautious scientist, Manga is saying "we're not sure."  But from what we know of volcanoes, it doesn't look at all likely.  So the pro-cataclysm crowd will have to kick at the gravel in disappointment and look for the next opportunity for a large part of the surface area of the Earth to be covered in flaming debris.
Better luck next time, guys.  Cheer up, maybe there's an asteroid out there heading our way.
*******************************************