Preparing for the worst

I'm about halfway through the first draft of my current work-in-progress, a novel called In the Midst of Lions about a perfectly ordinary upper-middle-class guy who gets caught up in the fall of civilization.  By this point in the novel, order has pretty much collapsed, and he's in the ruins of downtown Seattle trying to find his way across the city and to a two-kilometer-long bridge and east into the mountains for safety (at least comparatively speaking).  He's taken some children under his wing, and in the harrowing scene I just wrote, is trying to get them away from a murderous warlord and his gang -- he himself barely escaped with his life after being captured and brutally beaten by them.

I hasten to interject at this point that In the Midst of Lions was in no way inspired by 2020.  I came up with idea decades ago -- in fact, I'd written a rough draft of the story back in the 1980s when I was an undergraduate.  (The current version bears little resemblance to the original, although the central idea is the same.)  I'd thought of returning to it many times, but always pushed it aside for other projects.  Then, late in 2019 -- pre-pandemic, and pre-Trump-breaking-the-Seventh-Seal-of-the-Apocalypse -- I decided to give it a go, and I'm quite pleased with the result, as dark as it is.

(If you're curious, the title comes from Psalm 56 -- "Have pity on me, O God, have pity on me... for I lie prostrate in the midst of lions that devour men.")

The reason this comes up is because of a paper in the journal Personality and Individual Differences that came out this week, and which looked at the correlation between people's ability to cope psychologically with the pandemic and governmental chaos, and their appreciation of zombie movies.  Entitled, "Pandemic Practice: Horror Fans and Morbidly Curious Individuals Are More Psychologically Resilient During the COVID-19 Pandemic," by Colton Scrivner of the University of Chicago, John Johnson of Pennsylvania State University, and Jens Kjeldgaard-Christiansen and Mathias Clasen of Aarhus University, the paper looks at how reading books or watching movies about civilization collapsing and people being killed in nasty ways might have prepared us for 2020.

One explanation for why people engage in frightening fictional experiences is that these experiences can act as simulations of actual experiences from which individuals can gather information and model possible worlds.  Conducted during the COVID-19 pandemic, this study tested whether past and current engagement with thematically relevant media fictions, including horror and pandemic films, was associated with greater preparedness for and psychological resilience toward the pandemic.  Since morbid curiosity has previously been associated with horror media use during the COVID-19 pandemic, we also tested whether trait morbid curiosity was associated with pandemic preparedness and psychological resilience during the COVID-19 pandemic.  We found that fans of horror films exhibited greater resilience during the pandemic and that fans of “prepper” genres (alien-invasion, apocalyptic, and zombie films) exhibited both greater resilience and preparedness.  We also found that trait morbid curiosity was associated with positive resilience and interest in pandemic films during the pandemic.  Taken together, these results are consistent with the hypothesis that exposure to frightening fictions allow audiences to practice effective coping strategies that can be beneficial in real-world situations.

You have to wonder if it works the other way, though.  Maybe living through 2020 has blunted our appreciation for horror movies.  "Okay, maybe being eaten by the living dead is horrible, but do y'all remember what happened last November?" 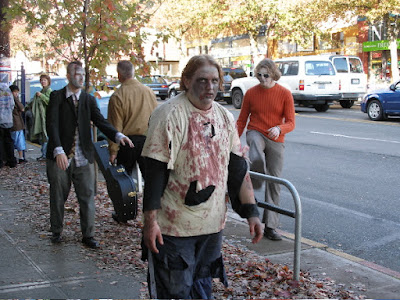 "I'm not sure that watching such movies now would be helpful for our current situation," study co-author John Johnson said, in an interview with Science Daily.  "However, my understanding of pandemics and other life-challenging events is that similar future challenges are absolutely inevitable.  The past is often forgotten too easily.  Who remembered the Spanish flu epidemic until scientists brought up that piece of history during COVID-19?  This reinforces my belief that consuming stories from books, films and maybe even video games is not just an idle pastime, but a way for us to imagine simulated realities that help prepare us for future challenges."

So we writers of scary fiction are performing a public service.  Just getting people ready for how much worse it could get, or (conversely) getting them to think, "Things are bad now, but at least I'm not being vivisected by aliens."  Now, I gotta get to work on my novel.  The last thing that happened is that the main character just saw some graffiti spray-painted on a wall, left for him by the one of the warlord's evil henchmen, saying, "You'd better run, because if I see you again, you're a dead man."

I mean, getting my readers to prepare for a catastrophe is one thing, but leaving a nice guy in that situation is just cruel.

******************************************
As a biologist, I've usually thought of myself as immune to being grossed out.  But I have to admit I was a little shocked to find out that the human microbiome -- the collection of bacteria and fungi that live in and on us -- outnumber actual human cells by a factor of ten.
You read that right: if you counted up all the cells in and on the surface of your body, for every one human cell with human DNA, there'd be ten cells of microorganisms, coming from over a thousand different species.
And that's in healthy humans.  This idea that "bacteria = bad" is profoundly wrong; not only do a lot of bacteria perform useful functions, producing products like yogurt, cheese, and the familiar flavor and aroma of chocolate, they directly contribute to good health.  Anyone who has been on an antibiotic long-term knows that wiping out the beneficial bacteria in your gut can lead to some pretty unpleasant side effects; most current treatments for bacterial infections kill the good guys along with the bad, leading to an imbalance in your microbiome that can persist for months afterward.
In The Human Superorganism: How the Microbiome is Revolutionizing the Pursuit of a Healthy Life, microbiologist Rodney Dietert shows how a lot of debilitating diseases, from asthma to allergies to irritable bowel syndrome to the inflammation that is at the root of heart disease, might be attributable to disturbances in the body's microbiome.  His contention is that restoring the normal microbiome should be the first line of treatment for these diseases, not the medications that often throw the microbiome further out of whack.
His book is fascinating and controversial, but his reasoning (and the experimental research he draws upon) is stellar.  If you're interested in health-related topics, you should read The Human Superorganism.  You'll never look at your own body the same way again.
[Note:  if you purchase this book using the image/link below, part of the proceeds goes to support Skeptophilia!]