The guilt of the instigators

A number of years ago, I was talking with a friend about her recent divorce from a man who was a serial philanderer and emotional abuser, and from whom she had separated more than once, always taking him back when he promised reform.  At that point my own divorce was also recent history, and I asked her what she'd come away with after the experience.

She looked thoughtful for a moment, and said, "I think the biggest lesson I learned is, when someone shows you who he truly is, believe it."

As of the time of this writing, the attempted coup against our government by armed rioters is only twenty-four hours old, and already I'm seeing the distraction campaign by Republicans getting into full swing.  "This isn't who we are," the official GOP Twitter account said.  Rudy Giuliani said "stop the violence" after having called for "trial by combat" only hours earlier.  Ivanka Trump asked for the rioters to leave peacefully -- but when the protests started, had said they are "American patriots."  Brit Hume speculated that they were "leftist Antifa in disguise" despite the fact that there are photographs, and the ones who have been identified are all well-known far-right agitators.  Ted Cruz asked for the rioters to disperse -- but still voted against certifying the results of a legitimate, fair election later that evening.  Mitch McConnell and Lindsey Graham both made speeches against the riots, the move to question the election, and Trump himself.  Twitter suspended Trump's account for twelve hours, supposedly "pending review for permanent deletion."  Several Trump staffers have resigned, and several more are expected to do so in the next day.  Brian Kilmeade and Steve Doocy of Fox News said that Trump "acted very badly" in saying he loved the rioters and that they were "very special."

And on and on.

The problem is: it's too late.  It's way too fucking late to claim the moral high ground, to act as if they haven't supported an amoral psychopath for four years, making excuses for every insane thing he's done all along the way.  Without the support of these people he never would have been nominated, much less elected.  Especially infuriating is the sudden realization by Twitter and Fox News that they're complicit in violent insurrection -- that between the two of them, they created this monster.  Without Twitter and Fox News, and far-right commentators like Rush Limbaugh, Trump would have remained what he was -- a failed businessman and washed-up reality TV star. 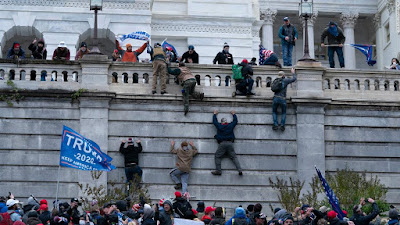 And we've been warning for years that this was coming, that the lies and misinformation and polarization were going to have consequences.  I say "we" because I've been writing about the parallels between Trump's rise and Germany in the 1930s since he was nominated.  I was called an alarmist by people on both sides of the aisle.  The conservatives said Trump was a true patriot who cared deeply for the average American; the liberals said he was an incompetent but that the system of checks and balances was there to keep the reins on him.

But people like Mitch McConnell and Lindsey Graham and Ted Cruz made sure the checks and balances were never invoked.  They gave Trump carte blanche.  Fox News helped matters along by making sure that any of the innumerable lies and outright insane statements Trump made never got aired, that the loyal viewers only ever saw things that painted him in a positive light.  They created a vision of a man who was a messiah, the only one who could save America from the godless evil liberals...

... and their followers believed it.

Stephen King said -- a long time ago -- "The people who have spent years sowing dragon's teeth seem surprised to find that they have grown an actual dragon."  Trump's enablers created this situation.  Each of them is as culpable as Trump is in what happened on January 6.  They are guilty of the deliberate, calculated deception of a significant percentage of the American citizenry, who were trained to discount every criticism of Trump they heard, and so now... discount every criticism of Trump they hear.

The mealy-mouthed tut-tutting about the violence in the Capitol (and in a number of state capitols as well) can not be allowed to get them off the hook for this.  I'm no expert in jurisprudence, so I am unqualified to weigh in over issues like whether the congresspeople who voted against certification of the election or who instigated the coup attempt could be expelled and/or prosecuted.  But doing nothing -- saying, "Oh, well, it's simmered down, we're okay now" -- will work about as well as when Susan Collins voted against removing Trump after he was impeached early last year, and said, "I think he's learned his lesson."

I guess he hasn't, Senator Collins.

If someone shows you who he truly is, believe it.

Undoing the damage this has done will not be easy or quick.  It'll still be with us long after the windows in the Capitol are replaced, the papers and files that were dumped on the floor are put back, the damage to furniture is repaired.  I don't envy the new administration the work they have ahead.  But if we don't want this to happen again -- which, I trust, is the hope of every American -- we cannot let the ones who did this get away with it.  And I'm not talking only about the participants in the riot.  I'm talking about the ones who created this situation, from Trump on down.  I'm talking about Fox News, OAN, Newsmax, the far-right commentators who built Trump up as a god-figure, the true believers who worship him.  I'm talking about the elected officials who coldly and hypocritically encouraged it -- some of them laughing up their sleeves in private about what a moron Trump is -- because they saw it as a way to fill their own pockets and keep their positions of power.

We need reform, and that doesn't mean accepting that the Democrats have all the answers.  They don't.  It means stopping the continual stream of self-aggrandizing lies.  It means refusing to throw away anything that doesn't immediately appeal to your biases as "fake news."  It means turning off the television and radio and depriving the media that thrives on polarization of the only thing they care about, which is cash from sponsors.

And it means holding people accountable for what they say or do.  Every damn time.