The origins of empathy

When I was a graduate student at the University of Washington, I took a course in Anatomy & Physiology.  The anatomy part turned out to be easier than I'd anticipated, because I've got a decent memory for names of things and also because my friends and I learned the various organs and tissues using acronyms that ranged from vulgar to outright obscene.  (One of the more printable ones: for the nerve branches of the face -- temporal, zygomatic, buccal, mandibular, and cervical -- "Tommy Zimmerman's bowels move constantly."  Okay, it's gross, but y'know what?  Writing this, thirty years later, I still remembered them without looking 'em up.)

The physiology part was more of a challenge, but however hard the course was, learning about the complexity of what was going on inside my own body was downright fascinating.

The topic comes up, though, not because of the content but because of the attitude of the professor.  In one of the labs, we were to do a dissection of a recently-killed mouse, and the professor demonstrated how to kill one humanely.  I'm not saying I was unaware that lab animals are routinely killed, nor that learning how to dispatch one humanely if you must isn't a good idea.  What bothered me was that the professor was downright callous about the whole thing, laughing as he picked up the mouse he was about to kill, saying, "Oh, well, life's tough, buddy.  Any last words?  No?  Okay, then."

I was pretty appalled.  I went into biology in large part because I have a tremendous respect for the living world.  Again, I'm not naïve; "nature is red in tooth and claw," and all that sort of thing.  I eat meat and wear leather shoes and am fully in support of (responsible) hunting, and am aware that I'm just another animal occupying his position in the food chain.

But for me, the focus is respect.  Okay, sometimes animals will die, to provide food or other resources, or to support laboratory research.  But every effort should be made to treat them kindly and humanely, to hold their lives and well-being with respect insofar as you can.  There is no excuse for a cavalier attitude toward life -- toward any life. 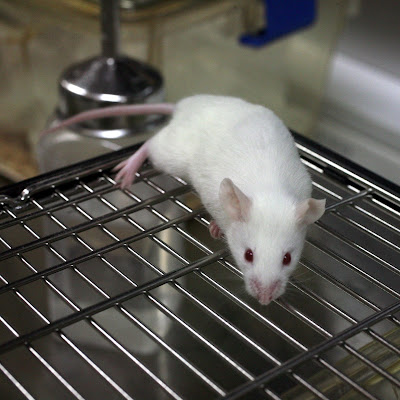 When I voiced my opinion to the professor -- saying something like, "I know you have to kill the mice sometimes, but do you have to laugh about it?" -- his laughter grew louder, but directed toward me now. "What does it matter?" he said.  "The mouse dies either way."

I said, "That attitude makes you less sensitive to reducing the fear and suffering it experiences."

Now his laughter turned to incredulity.  "You're not going to have a very long career in biology if you think animals have emotions.  You start anthropomorphizing mice, you're going to have a rough time of it."

I decided to choose my battles (not least because he was going to be giving me my grades), and didn't argue further.  But I said to a friend later that day, "If that guy thinks animals don't have emotions, he must never have owned a pet in his life."  The bond between me and my dogs is not just because I pet them and give them dog kibble; in fact, experiments have shown that when a dog sees its beloved owner, it experiences a spike of the hormone oxytocin -- same as humans do when they're with their friends.  I've seen dogs grieve; when our lovable, hyper, eccentric border collie, Doolin, died at the ripe old age of 13, our other dog, Grendel, went into a positive decline.  He hardly ate or played.  All he wanted to do was sleep, curled up with one of Doolin's favorite toys, for several weeks before he began to get over losing his friend.

But even if I'd brought that kind of thing up, I'm sure the professor would have called it "anecdotal," if not something even more dismissive; and at that point, the oxytocin experiments were still in the future.  But this week a paper in Science by Monique Smith, Naoyuki Asada, and Robert Malenka of Stanford University has conclusively demonstrated that not only do animals experience fear and suffering, they are acutely aware of the fear and suffering of other animals.

In other words: they experience empathy, just as humans do.  And if my professor from long ago is still around, I want you to note: the experiment was done on...

In a paper titled "Anterior Cingulate Inputs to Nucleus Accumbens Control the Social Transfer of Pain and Analgesia," Smith et al. show that exposing a mouse to another mouse who is showing overt signs of distress causes a response in the part of the brain that regulates emotional state.  The authors write, "In mice, both pain and fear can be transferred by short social contact from one animal to a bystander.  Neurons in a brain region called the anterior cingulate cortex in the bystander animal mediate these transfers.  However, the specific anterior cingulate projections involved in such empathy-related behaviors are unknown."

I've never really understood how a biologist could honestly believe non-human animals don't have emotions, given that (1) we're animals, and (2) damn near everything about us from our intelligence on down exists along some kind of spectrum in other animal species.  It's really just a vestige of the old "human/animal" dichotomy, that there was some kind of qualitative difference between us and the rest of the living world -- be it a spirit, a soul, or (in the case of my professor) some undefinable something that makes our suffering relevant and theirs not.

But the Smith et al. paper puts that to rest, hopefully once and for all.  I can only hope that it will lead to more humane treatment of animals in general.  They feel emotions -- perhaps not with the sophistication we do, but that's a far cry from claiming they have no emotions at all.

And if that doesn't alter the perceptions and behaviors of the scientists, they are discounting the results of science because it's inconvenient -- meaning they hardly merit the title "scientist."