The voice of nature

Yesterday I wrote about my difficulty with maintaining concentration.  My mind's tendency to wander has been with me all my life, and at after sixty years of fighting with it I'm beginning to think it always will be.  This, coupled with an unfortunate history of not sticking with things long if I don't see quick results, has been why my attempts to make a practice of meditation have, all things considered, been failures.

I've had more than one person recommend meditation and mindfulness training as a means for combatting depression, anxiety, and insomnia, all of which I struggle with.  I even did a six-week mindfulness training course three years ago, thinking that if perhaps I learned some strategies for dealing with my errant brain, I might be more successful.  But even training didn't seem to be able to fix the fact that when I meditate, I nearly always veer off either into an anxiety attack or else fall asleep.  Steering a middle course -- being relaxed and tranquil enough to gain some benefit from it, but not so relaxed and tranquil that I lose consciousness -- just never seemed to be within my grasp.

Part of my problem is that I have a loud internal voice,  I know we all deal with internal chatter, but mine has the volume turned up to eleven.  And it's not even interesting chatter, most of the time.  I sometimes have looped snippets of songs, usually songs I hate.  (Last week, I woke up at two AM with the song "Waterloo" by Abba running through my head.  God alone knows why.  I don't even like that song during the day.)  Sometimes it's just completely random musings, like while I was running yesterday and pondering how weird the word "aliquot" is.  (For you non-science folks, it means "a sample" -- as in, "transfer a 3.5 ml aliquot of the solution to a test tube."  I also found out, because I was still thinking about it later and decided to look it up, that it comes from a Latin word meaning "some.")

So most of the time, my brain is like a horse that's always on the verge of spooking, throwing its rider, and then running off a cliff.

The topic comes up because of a paper that appeared this week in the journal Psychomusicology: Music, Mind, and Brain, which found that the old technique used for combatting distraction during meditation -- to focus on your breath -- simply doesn't work well for some people.  Not only is it an ongoing battle, a lot of people have the same problem I did, which is taking those mindfulness skills and then applying them during the ordinary activities of the day.

In "Exploring Mindfulness Attentional Skills Acquisition, Psychological and Physiological Functioning and Well-being: Using Mindful Breathing or Mindful Listening in a Nonclinical Sample," by Leong-Min Loo, Jon Prince, and Helen Correia, we read about a study of 79 young adults who were trained in mindfulness and meditation techniques -- but for some of them, they were instructed in the traditional "return to your breath if you get distracted" method, and others were told to focus on external sounds like quiet recorded music or sounds of nature.  Interestingly, the ones who were told to focus on external sounds not only reported fewer and shorter episodes of distraction during meditation, they reported greater ease in using those techniques during their ordinary daily activities -- and also reported lower symptoms of depression and anxiety afterward than the group who mediated in silence. 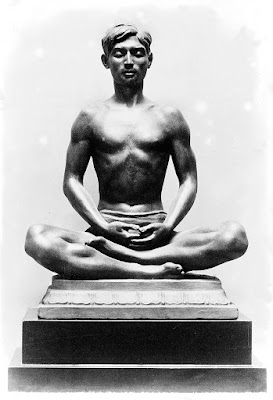 [Image licensed under the Creative Commons anonym, Bronze figure of Kashmiri in Meditation by Malvina Hoffman Wellcome M0005215, CC BY 4.0]

What's funny is I was just thinking about the idea of soothing sounds a couple of days ago, when I participated in one of those silly online quizzes.  One of the questions was, "What are your favorite sounds?" -- and after I rattled off a few, I realized that all but one of them were natural sounds.  Thunder.  Wind in the trees.  The dawn chorus of birds in spring.  A hard rain striking the roof.  Ocean waves.  (The only one on my list that wasn't natural was "distant church bells at night" -- a sound that reminds me of when I was nine and lived with my grandma for a year, and every evening heard the beautiful and melancholy sound of the bells of Sacred Heart Catholic Church in Broussard, Louisiana, rising and falling with the breeze.)

So maybe it's time to try meditation again, but using some recordings of natural sounds to aid my focus.  I know I'll still have to combat my brain's tendency to yell absurd and random stuff at me, and also my unfortunate penchant for giving up on things too easily.  But something external to focus on seems like it might help a bit, at least with the attentional part of it.

And lord help me, if it purges "Waterloo" from my brain, it'll be worthwhile regardless.