So our conspiracy theory of the day is: the US government is hiding living giant humanoids to create a race of hybrid super-soldiers.

This, at least, is the contention of one Steven Quayle, who in has created a video with the entertaining title "GIANT REPTILIAN MAN-EATING DEMONS IN A CITY NEAR YOU (part 1)" (capitalization his) that was sent to me by a friend and loyal reader of Skeptophilia.  If you choose to watch it, please be aware that it's over two and a half hours long.  I made it through about fifteen minutes, which I think is pretty damn good, although by that time I felt like my brain had turned to cream-of-wheat and was leaking out of my ears.  The opening shows Quayle, interspersed with science fiction movie clips and backed up by atmospheric music, delivering the following scary lines:

I believe that the big lie that is going to be placed, hoist [sic] upon the world, is that the aliens created mankind...  Most people do not understand the evil.  Most people can't even embrace the fact that this isn't about old bones.  When I say mind-blowing, it will also be heart-freeing.  If I start talking about fallen angels having sex with Earth women, they snicker.  Well, that snicker tells me they've already made up their minds.  The super-soldier program is one of the most, well, almost unbelievable, yet so believable, programs that the US military is involved in.

Further along in the video, Quayle assures us that he doesn't believe in alien overlords.  Nope.  That would be ridiculous.  The Annunaki, he says, aren't aliens, they're fallen angels.

Which is ever so much more believable.

Worse yet, they're still around.  "They [the scientists] are starting from the premise that all of the giants are gone.  We're starting from the premise that there are modern-day giants now, and they're not suffering from acromegaly or some pituitary disorder, but they're literally going to fulfill the biblical statement of Matthew 24 where Jesus says, 'Just as in the days of Noah, so it will be in the days of the coming of the Son of Man.'"

The whole thing, Quayle says, is a "multi-thousand-year cover up."

"It's interesting, Tim," Quayle said to the interviewer.  "There's evidence of the bias of the Smithsonian, and their contempt for out-of-place artifacts -- every time giant bones were found, it didn't matter if it was on the West Coast, the Arctic, the Antarctic believe it or not, the East Coast, the Ohio River Mounds, they always have a fabulous cutoff point, being once the Smithsonian is notified, and those bones are sent to the Smithsonian, they're never heard from again." 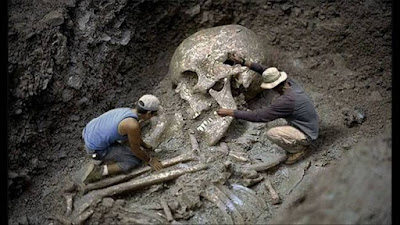 A giant skeleton in Brazil, or a clever example of Photoshop, depending on which version you go for
"The point has been to keep this biblically-relevant topic out of the minds of the people," Quayle adds.

Why, you might be asking, would the Smithsonian -- and other scientific research agencies -- go to all of this trouble?  After all, careers are made from spectacular discoveries like these.  If the bones were real, not to mention the Annunaki, you'd think that archeologists would be elbowing each other out of the way to be the first to publish these findings in a reputable journal.

The reason, of course, is that the government is intimidating the scientists into silence so that they can keep secret the fact that these giant dudes are still around, and are being used in sinister genetics experiments to create a race of human/giant super-soldiers.

Quayle also tells us that he won't appear on camera unless he gets the final say on video and audio edits, and that "No one has been willing to agree to that."  Which makes it kind of odd that he told us this while on camera.  And that he now has his own video production company and an entire YouTube channel of his own.

Of course, he might have been right to avoid the spotlight.  He says he's afraid for his life, that he's being followed by the Men in Black.

"I'll be lucky not to be killed one day.  People have disappeared, Tim.  People who know about this, who have evidence."

And once again, we could convince ourselves that all we have is a lone wacko with access to recording equipment -- until you start reading the comments, of which I will give you a mercifully short sampling:
So there you have it. Giant Anananaki (if I've counted the "Na's" correctly) being hidden by the government so they can have lots of sex with Earth women, who will give birth to a race of immortal super-soldiers, as hath been prophesied in the scripture.

You'd think, though, that if the US has had this super-soldier program for decades (as Quayle alleges), they'd have brought 'em out by now.  Do not try to convince me that if Donald Trump had access to super-soldiers he wouldn't already have deployed them against the DNC headquarters.  This, of course, isn't the most powerful of the arguments against Quayle's contentions; but just based upon that, I think the likelihood of there being ferocious giant half-human, half-fallen-angel dudes is pretty slim.
I think it's much more likely that Quayle and his followers have a screw loose.

But that's just me.  And if I end up being taken prisoner by a troop of white hairy cave men with brow ridges and used in sinister scientific experiments, I suppose it'll serve me right.
******************************************
As a biologist, I've usually thought of myself as immune to being grossed out.  But I have to admit I was a little shocked to find out that the human microbiome -- the collection of bacteria and fungi that live in and on us -- outnumber actual human cells by a factor of ten.
You read that right: if you counted up all the cells in and on the surface of your body, for every one human cell with human DNA, there'd be ten cells of microorganisms, coming from over a thousand different species.
And that's in healthy humans.  This idea that "bacteria = bad" is profoundly wrong; not only do a lot of bacteria perform useful functions, producing products like yogurt, cheese, and the familiar flavor and aroma of chocolate, they directly contribute to good health.  Anyone who has been on an antibiotic long-term knows that wiping out the beneficial bacteria in your gut can lead to some pretty unpleasant side effects; most current treatments for bacterial infections kill the good guys along with the bad, leading to an imbalance in your microbiome that can persist for months afterward.
In The Human Superorganism: How the Microbiome is Revolutionizing the Pursuit of a Healthy Life, microbiologist Rodney Dietert shows how a lot of debilitating diseases, from asthma to allergies to irritable bowel syndrome to the inflammation that is at the root of heart disease, might be attributable to disturbances in the body's microbiome.  His contention is that restoring the normal microbiome should be the first line of treatment for these diseases, not the medications that often throw the microbiome further out of whack.
His book is fascinating and controversial, but his reasoning (and the experimental research he draws upon) is stellar.  If you're interested in health-related topics, you should read The Human Superorganism.  You'll never look at your own body the same way again.
[Note:  if you purchase this book using the image/link below, part of the proceeds goes to support Skeptophilia!]