Happy New Year 2021 to all of my readers, and I hope this one brings you everything you hope for.  Given the shitshow 2020 was, my wishes for the new year are more fervent and heartfelt than they usually are.  Personally, I'd like to finish the novel I'm currently halfway through writing; I'd like to get my 5 K race time down below 27 minutes; and I'd like to get back to lifting weights every day.  On a larger scale, I'd like it if between vaccination and people being smart about social contact, the COVID pandemic starts to wane; and I'd like it if Donald Trump doesn't incite his followers to start a civil war when Joe Biden is inaugurated in three weeks and Trump will finally have to face up to the fact that for the first time in his life, someone told him "no" and there's nothing he can do about it.

I'm hoping all that's not too much to ask for.

But speaking of calendars, milestones, and benchmarks, you may not have heard that apparently there's been a proposal to revamp our calendar.  According to a video by the Munich-based filmmakers that call themselves "Kurzgesagt" (German for "in brief"), we shouldn't be in the year 2021, we should be in 12,021.

The reason for this proposal is that basing the most commonly-used calendar in the world on the beginning of Christianity gives it a fairly arbitrary zero year, given how many people in the world aren't Christian.  Plus, having a great swatch of history marked by the calendar-running-backwards "B.C." scale is confusing and unnecessary. So Philipp Dettmer and his friends at Kurzgesagt have suggested a new scale, and one that conveniently would only require the addition of a "1" at the beginning of our current year.

So what happened 12,021 years ago that's so special?  Dettmer says this is when the first known permanent stone building was built in the hills of southern Anatolia, in what is now Turkey, marking the point at which we began to "build a new world on top of the old one."  At that point, we set in motion the massive terraforming operation that has characterized humanity ever since.

This would mean that we would do away with the old "B.C." and "A.D." designations; all years on the calendar after that point (and thus all of recorded history) would run forward and would be "H.E."  (Human Era). 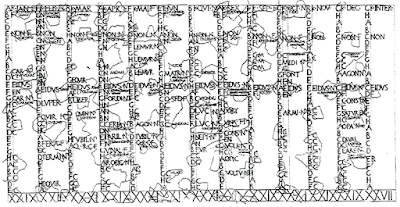 Roman calendar from the 1st century B.C.E., or the 99th century H.E., whichever you prefer [Image is in the Public Domain]
Okay, there are a few problems with this.

First of all, the temple that Dettmer et al. are referencing -- Göbekli Tepe, near the town of Şanlıurfa -- was not built 12,021 years ago, it was founded around 11,150 years ago, which is a 900-odd year discrepancy.  This is according to the oldest radiocarbon dates we have from the site, so it seems like a good estimate.  So if you really do want to measure the years based on the founding of this temple, you'd have to do more than simply adding a "1" to the beginning of the current calendar year, you'd have to add 9,129, which is not nearly as convenient.

Second, I wonder if they've considered the level of conniption that would be thrown by the Religious Right if this was seriously proposed.  These, after all, are the same people who founded the War on Christmas trope, which claims (among other things) that Starbucks changing its winter cup design was the moral equivalent of assassinating the Three Wise Men while they were on their way to Bethlehem.  These are also the same people who regularly send me hate mail when I use "B.C.E." and "C.E." ("Before Common Era" and "Common Era") instead of B.C. and A.D.  (One memorable one said, "You're so much in love with your lord and master Satan you can't even bear to write Christ's name in an abbreviation.  You're despicable." Which became a lot funnier when the final sentence made me think of reading the whole thing in a Daffy Duck voice, so I did.  You should try it.)

Then there's a third issue, which is that it's not like we don't have commemoration of other deities in other parts of our timekeeping system, such as the days (Tiw, Woden, Thor, and Freyja) and months (Januarius, Februarius, Mars, Maia, Juno).  The difference is that pretty much no one worships any of these gods any more, which in Thor's case is kind of a shame because he was a serious badass, and that's not even considering how breathtakingly hot Chris Hemsworth is.

Of course, it's not like calendar-keeping ever was a particularly exact science.  Our current zero year (well, 1 A.D., as there's no Year Zero in the contemporary calendar) is supposed to be based on the birth of Jesus, but the problem is, the most recent scholarship on the topic -- calculated from known dates of Roman emperors' reigns and the lives of biblical figures such as Herod -- has concluded that Jesus was born in 4 B.C.  He also wasn't born on December 25, but probably some time in the spring, given that "the shepherds were tending their lambs in the fields."  The settlement on December 25 as the date for the celebration of Jesus's birth probably started some time mid-4th century, and a lot of folks think that the date was chosen because it coincided with the part of the year when the Romans celebrated Saturnalia, a solstice festival associated with meals, get-togethers, and gift-giving (sound familiar?).  The idea was that if you sanctified the date by putting a Christian spin on the celebration, you could let the former pagans still have their party but pretend it was something holier.  The church fathers figured with luck, the recent converts would eventually forget about the pagan part and focus only on the holy part, which 1,700 years later still hasn't happened, given Christmas trees, Santa Claus, and Black Friday specials at Walmart.

Now, my point is not that any of the above stuff is exact, either; the spring 4 B.C. date for Jesus's birth still rests on a lot of guesswork.  It's more that our calendar-keeping isn't based on anything real as it is.  It's hard enough to keep up with the inevitable vagaries that are engendered by the fact that the Earth's rotation and revolution cycles don't line up especially well, which is why we have leap days every four years, and also is what necessitated a reshuffling of the calendar back in the sixteenth century when it was noticed that the calendar dates of holy days had kind of come unglued from what day it was as calculated by the position of the Sun and stars.  But even this proved to be a major balls-up to fix, because (of course) not everyone agreed to implement the new calendar at the same time (Russia and Serbia actually held out until 1918!), so if you asked someone what day it was, it would differ depending on what country they were from.  (This was the reason for one of the most wonderful twists in Umberto Eco's incredible novel Foucault's Pendulum, only one of many fantastic aspects of that brilliant, byzantine labyrinth of a story.)
So anyhow, my point is, trying to make a world-wide major-scale change to calendar-keeping and getting everyone to agree would be entirely too much for us.  Hell, we still have people who can't wrap their brains around concepts like "Earth round, not flat," "vaccines good, diseases bad," and "evolution actually happened."  Changing the calendar, even if there was a good reason to, would be a complete non-starter.

Me, I think if we're really serious about having a meaningful calendar, we should start with the real milestone, which is the Big Bang.  Now that's what I'd call a Zero Year.  And with that thought, I'll end here, and pause only to reiterate my wish that your 13,800,002,021 A.B.B. is a special one.
******************************************
This week's Skeptophilia book recommendation is apt given our recent focus on all things astronomical: Edward Brooke-Hitching's amazing The Sky Atlas.
This lovely book describes our history of trying to map out the heavens, from the earliest Chinese, Babylonian, and Native American drawings of planetary positions, constellations, and eclipses, to the modern mapping techniques that pinpoint the location of stars far too faint to see with the naked eye -- and objects that can't be seen directly at all, such as intergalactic dust clouds and black holes.  I've always loved maps, and this book combines that with my passion for astronomy into one brilliant volume.
It's also full of gorgeous illustrations showing not only the maps themselves but the astronomers who made them.  If you love looking up at the sky, or love maps, or both -- this one should be on your list for sure.
[Note: if you purchase this book using the image/link below, part of the proceeds goes to support Skeptophilia!]