Why the sad face?

Springboarding off Saturday's post about non-human animals having emotions, today we're going to look at a study that came out a couple of weeks ago in Frontiers of Veterinary Science that demonstrates that not only do animals have emotions, they've evolved to be able to play on ours.

In a paper with the rather intimidating title "The Application of Geometric Morphometrics to Explore Potential Impacts of Anthropocentric Selection on Animals' Ability to Communicate via the Face: The Domestic Cat as a Case Study," animal behaviorists Lauren Finka and Mark Farnsworth (of Nottingham Trent University), Stelio Luna (of São Paulo State University), and Daniel Mills (of the University of Lincoln) looked at an interesting phenomenon; the way human selection of animals for pets has led to the animals evolving traits that trigger a nurturing response in the owners.  A particularly interesting one is the "inner eyebrow raising muscle," which in domestic dog breeds is far more highly developed than in wild dogs, and which causes the furrowed brow "sad puppy" look any dog owners out there will no doubt recognize immediately.  My lovable rescue dog Grendel was the past master of this particular expression: 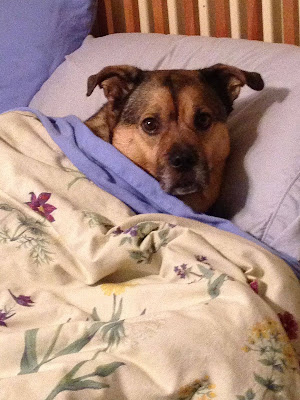 No, he was not spoiled.  Don't even suggest such a thing.

People seeing Grendel usually took one look at him and said, "Oh, you poor poor puppy!  Why the sad face?  Here, puppy, have a cookie."  Which, of course, led him to understand that looking sad got him what he wanted.

Evolution for the win.

The study that came out a couple of weeks ago, however, took a look at cats, which in general have less emotionally expressive faces than dogs do.  My wife's cat, Geronimo, who died a couple of years ago at age eighteen, had a spectrum of facial expressions that ran the gamut from "I'm pissed off" to "I hate you," occasionally reaching the level of "fuck off and die."  I know this is ascribing human thoughts to a non-human animal, but whenever Geronimo looked at me, his yellow eyes narrowed to slits, I always came away with the expression that he was plotting to disembowel me in my sleep.

But the current study shows that most domestic cats have a wider range of emotional communication than Geronimo did.  Interestingly, what the researchers called "pain features" -- movements of the face indicative of distress -- were often present in "baby-faced" breeds like Persians even when the animals were not actually in distress, while long-faced breeds like Siamese showed fewer "pain features" even when the animal was in pain.  I wonder if this is why Siamese cats have a reputation for being "aloof" and "independent," and Persians a reputation for being in need of pampering?

The ability of companion animals to readily solicit care from humans is obviously advantageous.  However, it is possible that permanently vulnerable looking individuals might have a diminished capacity to clearly indicate when care is or is not required, as well as to display other information relevant to their actual state or intentions.  Thus, if certain cat breeds are being selected to display “pain-like” features on their faces, these features may serve to solicit unwanted or inadequate attention from their caregivers.  More generally, such types of anthropocentric selection might lead to increased anthropomorphic tendencies.  If, for example, the animal has the appearance of an expression which humans find relatable on some level, even if it is not necessarily reflective of that animals' affective state, it may be used to attribute emotions or characteristics to them.  For example, “grumpy cat” a cat made famous by her coverage on social media, achieved her moniker due to her perceived “frowning” facial appearance.  However, this was likely a result of a combination of her feline dwarfism and paedomorphic [infant-like] features, rather than an expression of her irritability.

One interesting point the authors make is that one possible reason that cats in general have fewer facial cues to solicit nurturing from humans is that they've been in domestication as companions for a far shorter time than dogs have.  The human/dog relationship goes back millennia; and while cats have been used as mousers for centuries, their use as companion animals is of fairly recent origin.  In fact, a large percentage of current domestic cat breeds are under a hundred years old -- in other words, if you trace most "pure-bred" cats' ancestry back two hundred years, they all descend from a population of generic-looking felines that began to be heavily selected when people started keeping them in their homes, and expecting something more out of them than just ridding the house of rodents.
In any case, as the authors point out, the advantage to the pet is obvious.  In our case, our dogs play us like fiddles.  One of our current dogs, a lovable big galoot named Guinness, knows that to get what he wants all he has to do is put his head in my lap and just stand there.  I've tried ignoring him, but he knows that patience always gets him what he wants (usually petting) in the end.  If I make eye contact with him, the tail starts wagging, because he knows he won.
As usual.
But as my wife points out, the fact that they've evolved to yank on our heartstrings isn't entirely a one-way relationship.  We get companionship and love and lap-warming, and there's real value in that.  So really, I'm perfectly okay with being used.  A petless home would be a lot cleaner and quieter, but it would also be a lot colder, lonelier, and sadder.
******************************************
As a biologist, I've usually thought of myself as immune to being grossed out.  But I have to admit I was a little shocked to find out that the human microbiome -- the collection of bacteria and fungi that live in and on us -- outnumber actual human cells by a factor of ten.
You read that right: if you counted up all the cells in and on the surface of your body, for every one human cell with human DNA, there'd be ten cells of microorganisms, coming from over a thousand different species.
And that's in healthy humans.  This idea that "bacteria = bad" is profoundly wrong; not only do a lot of bacteria perform useful functions, producing products like yogurt, cheese, and the familiar flavor and aroma of chocolate, they directly contribute to good health.  Anyone who has been on an antibiotic long-term knows that wiping out the beneficial bacteria in your gut can lead to some pretty unpleasant side effects; most current treatments for bacterial infections kill the good guys along with the bad, leading to an imbalance in your microbiome that can persist for months afterward.
In The Human Superorganism: How the Microbiome is Revolutionizing the Pursuit of a Healthy Life, microbiologist Rodney Dietert shows how a lot of debilitating diseases, from asthma to allergies to irritable bowel syndrome to the inflammation that is at the root of heart disease, might be attributable to disturbances in the body's microbiome.  His contention is that restoring the normal microbiome should be the first line of treatment for these diseases, not the medications that often throw the microbiome further out of whack.
His book is fascinating and controversial, but his reasoning (and the experimental research he draws upon) is stellar.  If you're interested in health-related topics, you should read The Human Superorganism.  You'll never look at your own body the same way again.
[Note:  if you purchase this book using the image/link below, part of the proceeds goes to support Skeptophilia!]