Because I'm writing this in the last hours of the Trump presidency, and my other alternative is to become so anxious about what his followers might still do to fuck things up that I chew my fingernails till they bleed, today I'm going to focus on things that are very, very far from planet Earth.

Let's begin with the closest-to-home, three thousand light years away, which seems like it might be almost far enough for safety.

A new study of planetary nebulae -- gas and dust clouds that are what's left of stars that went supernova -- was the subject of a talk at the meeting of the American Astronomical Society last Friday.  Using the Hubble Space Telescope's Wide Field Camera, astronomers were able to photograph these amazing stellar remnants panchromatically (across the frequency spectrum of light).  And what they're learning is changing a lot of what we thought we understood.

Take, for example, NGC 6302, better known as the Butterfly Nebula.  It got its name because of symmetrical "wings" of debris that were thrown out when the central star blew up.  Why it has this strange symmetry is probably due to the magnetic field of the central star, but what's most surprising is that what astronomers thought was the central star doesn't seem to be, but is simply a white dwarf much closer to the Earth that happens to lie between us and the nebula.  Wherever the actual central star is, it's a doozy; from the spectral lines of the nebula, created when light from the star is absorbed and then re-emitted by the dust plumes, its surface is one of the hottest known, at a staggering 250,000 C.  (By comparison, the surface of our own Sun is a paltry 6,000 C or so.) 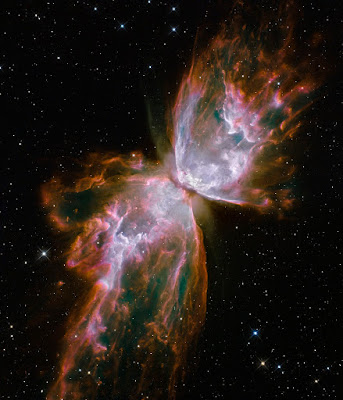 Then there's NGC 7027, the Jewel Bug Nebula, which is also remarkable because of its symmetry -- depending on what feature you're looking at, it shows spherical symmetry (symmetry around the center, like a basketball), axis symmetry (symmetry around a line, like the letter T), or point symmetry (symmetry across a central point, like the letter N).  It's simultaneously one of the brightest planetary nebulae and one of the smallest, and the new study confirms that it's a recently-formed object -- it's only six hundred years old.  (Of course, since it's three thousand light years away, the structure is actually 3,600 years old; but what we're seeing is what it looked like when it was a mere six hundred.)

"We're dissecting [planetary nebulae]," said Joel Kastner, a professor in the Rochester Institute of Technology's Chester F. Carlson Center for Imaging Science and School of Physics and Astronomy.  "We're able to see the effect of the dying central star in how it's shedding and shredding its ejected material.  We're able to see that material that the central star has tossed away is being dominated by ionized gas, where it's dominated by cooler dust, and even how the hot gas is being ionized, whether by the star's UV or by collisions caused by its present, fast winds."
Moving farther afield, another paper presented at the AAS meeting is about a weird object in NGC 253, the Sculptor Galaxy, which is 11.4 million light years away.  It's called a magnetar, and is another stellar remnant, but this one of a supergiant star.  The Fermi Gamma-ray Space Telescope and the Mars Odyssey orbiter both picked up a 140-millisecond-long pulse of gamma rays which seems to have been caused by a starquake on the surface of this object, a cosmic shudder that in one burst released one thousand trillion trillion (10 followed by 27 zeroes) times more energy than the largest recorded earthquake Earth has experienced.  The quake ejected a blob of plasma at nearly the speed of light, and the acceleration is what caused the gamma rays.
The new study gives us a lens into the behavior of some of the oddest structures in the universe, and one that may also be responsible for "fast radio bursts" -- quick pulses of radio waves whose source has been a mystery up until now.  "The apparent frequency of magnetar flares in other galaxies is similar to the frequency of fast radio bursts," said astrophysicist Victoria Kaspi of McGill Space Institute.  "That argues that actually, most or all fast radio bursts could be magnetars."
Last, we go out an astonishing thirteen billion light years, which is only seven hundred million light years shy of the radius of the observable universe.  Another paper at the AAS meeting describes a quasar -- an ancient supermassive black hole that is radiating energy from infalling material, and is one of the brightest objects known -- that lies at the center of a galaxy, and now holds the record for the oldest black hole ever observed.
Like all good scientific discoveries, this one raises almost as many questions as it solves, especially about how such a massive object could have formed so early in the life of the universe.  "A gargantuan seed black hole may have formed through the direct collapse of vast amounts of primordial hydrogen gas," said study co-author Xiaohui Fan, of the University of Arizona in Tucson.  "Or perhaps J0313-1806’s seed started out small, forming through stellar collapse, and black holes can grow a lot faster than scientists think.  Both possibilities exist, but neither is proven.  We have to look much earlier [in the universe] and look for much less massive black holes to see how these things grow."
So that leaves us all the way across the universe, which is a nice comfortable distance to put between myself and the Proud Boys.  It'd be better still to have me stay here and send the Proud Boys out to the farthest reaches of interstellar space, so that their inevitable tweets about what a god-figure Trump is and what a libtard snowflake I am will take thirteen billion years to get here.
But I guess that's not gonna happen.  We all have to stay here and solve our own problems, quasars and magnetars and nebulae notwithstanding.  I'll end with a quote from Doctor Who, which seems apt somehow given the voyage through time and space we just took: "I do think there’s always a way to put things right.  If I didn’t believe that I wouldn’t get out of bed in the morning,  I wouldn’t eat breakfast; I wouldn’t leave the TARDIS ever.  I would never have left home.  There is always something we can do."
***********************************