A lens into the dark sector

I don't really regret the weird, meandering path I took through the educational system -- but I have to admit to a bit of envy when it comes to people who are true experts in their field.

My inveterate dilettantism means I'm reasonably conversant in a lot of areas, but don't really have a deep understanding of anything.  Being a dabbler is neither a bad background to have as a high school teacher nor as a blogger, but it does mean that I often run into topics and think, "Wow, I really wish I could wrap my brain around this."

This happened just yesterday when I happened upon a paper in The European Physical Journal C called, "A Warped Scalar Portal to Fermionic Dark Matter."  My Bachelor of Science diploma in physics should have come with a sticky note appended to it that says, "... yeah, but he pretty much sucked as a physics student."  I struggled in virtually all of my upper-level physics classes, due to a combination of lack of focus and troubles with mathematics that I never figured my way out of.  The result is that I have a degree in physics, but reading an academic paper on the topic loses me after the first couple of paragraphs.

But so much of physics is so incredibly cool that I wish I understood it better.  The paper I took a look at yesterday (it'd be a vast exaggeration to say I "read" it) is a real coup -- if its findings bear out, it stands a good chance of solving two of the most perplexing questions of subatomic physics.

The first is akin to the planetary spacing issue I dealt with here a couple of days ago.  It asks a curious question: why do the fundamental particles have the masses they do?  Photons are massless; neutrinos damn close, but have a very tiny amount of mass; electrons are next (along with their relatives, muons), then protons and neutrons, and on up the scale to very heavy (and short-lived) particles like the "double-charmed xi baryon" which has four times the rest mass of a proton and a half-life so short it hasn't been measured yet, but is probably less than 10 ^-14 seconds (that's a decimal point, followed by thirteen zeros and a one -- better known to us non-physicists as "really, really short").

The other question is one I've looked at here before; the nature of the mysterious "dark matter" that makes up something like a quarter of the known mass of the universe, but thus far has resisted all detection by anything but its mysterious gravitational signature.  We don't know what it's made of, nor how (or if) it interacts with itself or other forms of matter.

I've commented about it that just as the odd constancy of the speed of light in a vacuum regardless of the reference frame of the observer waited around for a genius -- in this case, Einstein -- to explain it, the baffling dark matter is waiting for this century's Einstein to have the requisite insight. 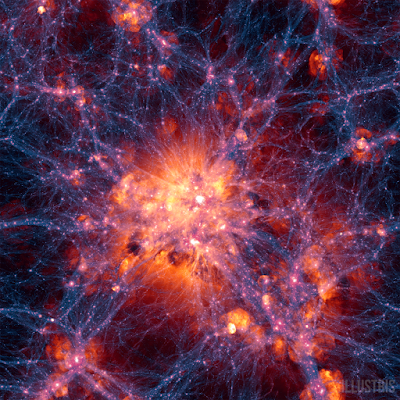 Well, the waiting may be over.  A trio of physicists at Johannes Gutenberg University Mainz -- Adrian Carmona, Javier Castellano Ruiz, and Matthias Neubert -- have come up with a theoretical framework that, if it bears out, explains both the fundamental particle masses and the nature of dark matter in one fell swoop, by proposing an additional fundamental particle and force that act on matter through a tightly-coiled extra spatial dimension.

A press release at Science Daily describes their research this way:

In a recent paper published in the European Physical Journal C, the researchers found a spectacular resolution to this dilemma.  They discovered that their proposed particle would necessarily mediate a new force between the known elementary particles (our visible universe) and the mysterious dark matter (the dark sector).  Even the abundance of dark matter in the cosmos, as observed in astrophysical experiments, can be explained by their theory.  This offers exciting new ways to search for the constituents of the dark matter -- literally via a detour through the extra dimension -- and obtain clues about the physics at a very early stage in the history of our universe, when the dark matter was produced.

"After years of searching for possible confirmations of our theoretical predictions, we are now confident that the mechanism we have discovered would make the dark matter accessible to forthcoming experiments, because the properties of the new interaction between ordinary matter and dark matter -- which is mediated by our proposed particle -- can be calculated accurately within our theory," said study co-author Matthias Neubert.  "In the end -- so our hope -- the new particle may be discovered first through its interactions with the dark sector."

This, gentle readers, is what is known as "Nobel Prize material."

If, of course, it is confirmed by further research and investigation.  The thing that makes me hopeful is that the theories with the greatest likelihood of success are the ones that explain several problems at once; consider, for example, how the quantum mechanical model simultaneously accounted for the energy levels in hydrogen atoms, the bizarre double-slit experiment, Heisenberg's Uncertainty Principle, and the collapse of the wave function (most famous for being responsible for the Schrödinger's Cat phenomenon).  A really powerful model has enormous breadth, depth, and explanatory power, and this one -- at least from a preliminary look -- seems to have all three.

But, as I pointed out at the beginning, that's from the point of view of a dilettante.  I'm hardly qualified to assess whether the Carmona et al. paper will withstand scrutiny from the experts or will end up as another in the very long list of ideas that didn't pan out.  So keep your eyes on the news.

It might be that we are about to turn the lights on in the dark sector for the first time ever.

************************************
Science fiction enthusiasts will undoubtedly know the classic 1973 novel by Arthur C. Clarke, Rendezvous with Rama.  In this book, Earth astronomers pick up a rapidly approaching object entering the Solar System, and quickly figure out that it's not a natural object but an alien spacecraft.  They put together a team to fly out to meet it as it zooms past -- and it turns out to be like nothing they've ever experienced.
Clarke was a master at creating alien, but completely consistent and believable, worlds, and here he also creates a mystery -- because just as if we really were to find an alien spacecraft, and had only a limited amount of time to study it as it crosses our path, we'd be left with as many questions as answers.  Rendezvous with Rama reads like a documentary -- in the middle of it, you could easily believe that Clarke was recounting a real rendezvous, not telling a story he'd made up.
In an interesting example of life imitating art, in 2017 astronomers at an observatory in Hawaii discovered an object heading our way fast enough that it has to have originated outside of our Solar System.  Called 'Oumuamua -- Hawaiian for "scout" -- it had an uncanny, if probably only superficial, resemblance to Clarke's Rama.  It is long and cylindrical, left no gas or dust plume (as a comet would), and appeared to be solid rather than a collection of rubble.  The weirdest thing to me was that backtracking its trajectory, it seems to have originated near the star Vega in the constellation Lyra -- the home of the superintelligent race that sent us a message in the fantastic movie Contact.
The strangeness of the object led some to speculate that it was the product of an extraterrestrial intelligence -- although in fairness, a team in 2019 gave their considered opinion that it wasn't, mostly because there was no sign of any kind of internal energy source or radio transmission coming from it.  A noted dissenter, though, is Harvard University Avi Loeb, who has laid out his case for 'Oumuamua's alien technological origin in his new book Extraterrestrial: The First Sign of Intelligent Life Beyond Earth.
His credentials are certainly unimpeachable, but his book is sure to create more controversy surrounding this odd visitor to the Solar System.  I won't say he convinced me -- I still tend to side with the 2019 team's conclusions, if for no other reason Carl Sagan's "Extraordinary Claims Require Extraordinary Evidence" rule-of-thumb -- but he makes a fascinating case for the defense.  If you are interested in astronomy, and especially in the question of whether we're alone in the universe, check out Loeb's book -- and let me know what you think.
[Note: if you purchase this book using the image/link below, part of the proceeds go to support Skeptophilia!]