I had a rather terrifying nightmare last night, and as is usual with such things, the retelling doesn't convey how absolutely awful it was.

My wife and I were in a house -- not our own, it was one of those generic tasteful split-level homes you can see in every upper-middle-class suburban neighborhood in the United States.  From the furnishings it was occupied, and the owners obviously had children because there were toys scattered about.

Then the toys began to come to life.

It wasn't like Chucky in Child's Play, where it was a possessed doll that had an evil personality; it was more that they were being controlled remotely, and only looked like toys but were actually weapons.  After a struggle we fought our way past them, and at some point (don't recall how) we were able to deactivate them.  So we're trying to find the way out of the house, stepping over all the fallen toy/weapons, and then (of course) they started to reboot.

This was the moment when I was thrashing around so much that my wife woke me up.  I didn't scream or anything (that'll be relevant in a moment) but was flailing and had awakened her.  She reassured me that it was just a dream, we didn't have evil remote-controlled toys in our room, and I was able to shake the fear pretty quickly.

I got up to get a glass of water, and when I opened my bedroom door, my dog, Guinness, was standing there looking up at me with a concerned expression.

So I got my water, and he followed me back into the bedroom, jumped on the bed, and basically smooshed himself against me, his head under my chin.  I put my arm around him and he gave a big sigh and we both fell back asleep.

Why this is weird is that this was pretty un-Guinness-like behavior.  He's never allowed on our bed at night, mostly because he weighs seventy pounds and takes up a large amount of space.  We sleep with the door closed and he always spends the night quietly snoozing on his sofa.  (Yes, he has his own personal sofa.  Yes, I know he's ridiculously spoiled.)  Whenever I get up in the middle of the night -- not that unusual, because I'm an insomniac -- he virtually never budges, much less barging in and jumping in bed with me at two AM.

So his behavior last night was very uncharacteristic, up to and including his basically draping himself over me once we got back into bed.  I know it may sound ridiculous, especially coming from a self-proclaimed rationalist skeptic -- but I swear, it seemed very much like he sensed that I'd had a bad scare and was upset, and wanted to comfort me. 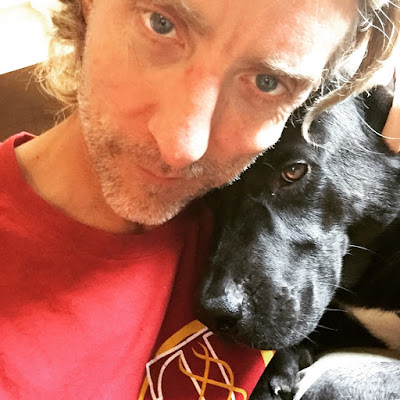 Me with my valiant protector
What makes me curious, of course, is how he knew.  As I said, I hadn't shouted out.  The conversation my wife and I had after I woke up was quiet, and given that I recovered from my fright rather quickly, not at all agitated.  And when I got up to get my glass of water, he was already at the door waiting for me, so he must have known something was wrong, enough that it woke him up, and he decided to come and see if he could help.
Any dog owner will confirm that dogs are uniquely in tune with their owners' emotional states.  We had a brilliant, and rather loony, border collie named Doolin, who could sense when my wife was going to have a migraine and would essentially glue herself to Carol's side until it was over.  The odd thing was that Doolin knew before Carol did; in fact, Carol came to look at Doolin's odd behavior as a clue that she better find her migraine meds while she could still think straight and see what she was doing.  Another of our dogs, Grendel, always knew when we'd finished dinner.  We have a strict no-begging policy at meals, but once we're done, even if we're still seated at the table, they can come up for some petting and attention.  Grendel could infallibly tell when we were done eating, and seconds later would come loping in to get an ear rub.  We tried more than once to figure out what his cue was -- whether it was the sound of putting our silverware or glasses down, or something we said like, "That was good, thanks for cooking" -- but never could really pin it down.  But his appearance was like clockwork, every single night.

There have been some preliminary studies of dogs' abilities to recognize their owners' emotions from facial cues, with (in my mind) rather equivocal results.  One back in 2016, which appeared in Biology Letters of the Royal Society, looked at "equivalent valence" between a human's expression and the emotion conveyed in a recorded utterance -- how, for example, a dog might react to an angry face combined with a playfully-toned phrase.  It found that when the facial expression and the tone of the utterance had equivalent valence, the dog spent longer looking at the photograph than either when the valence was different, or when the photograph was shown with a recording of white noise.

A second, in 2018, looked at the difference in reaction when dogs were shown faces with various emotions simultaneously on two different monitors, one to the dogs' right, the other to the left.  It's been determined that dogs, like humans, have lateralized brains, with the two cerebral hemispheres performing complementary (rather than redundant) functions, and that (again like humans) they usually have dominant left hemispheres.  Because of this, the conjecture was that more intense emotions would cause the animals to pay more attention and turn their heads to the left, while less intense emotions would either show no preference or result in a rightward turn.

Sure enough, that's what happened.  Human faces showing fear, anger, and disgust caused a preferential leftward turn; a surprised face and a neutral expression caused a rightward turn (and also a shorter time looking at the photograph).  Additionally, the intense/negative faces caused the dogs to experience an increase in heart rate and signs of canine stress -- lowered tail, pulled back ears, and so on.  A surprising result was that a happy face caused a leftward turn.  One possibility is that humans' smiles are a fairly uncommon way of expressing relaxation and happiness in the animal world; for most species, baring the teeth is a threat, not a gesture of friendship.  It's also possible that the dog was reacting because of the intensity of the expression, not its actual emotional content.  Impossible to tell.

Those experiments, though, are pretty broad-brush.  What I've found in my long years of being a dog owner is how attuned they are to the specific gestures and actions of their owners, when the same gesture or action from someone else would cause no response at all.  Our aforementioned border collie, Doolin, was a phenomenal frisbee-catcher -- but only when my wife was throwing it.  When Carol threw the frisbee, Doolin always took off in exactly the right direction, and nailed maybe 95% of the throws with a spectacular leaping catch in mid-air.  With me, she was equally likely to run pretty much any direction, and missed most of the throws.  Like with Grendel's "dinner's over" cues, we tried like hell to figure out what Doolin was picking up about my wife's body language when she threw the frisbee that I couldn't seem to duplicate, and never did figure it out.

So I'm back to where I started, which is simply an anecdotal sense that dogs are exquisitely sensitive to their owners' emotional states.  I've noted that when I'm feeling low Guinness is much more likely to spend the day snoozing at my feet rather than on His Personal Sofa, but I don't know whether that's because of his sensitivity, because of dart-thrower's bias, or simply my reading more into his behavior than what's actually there.  In any case, it's a curious phenomenon, and worthy of more study.  In the interim, I'd love to hear my readers' dog stories -- feel free to post your experiences of your dogs picking up on your feelings in the comments section.  Or, conversely, feel free to tell me I'm full of malarkey.  Don't worry, it won't bother me, Guinness will be right there to make me feel better.

*********************************
Science writer Elizabeth Kolbert established her reputation as a cutting-edge observer of the human global impact in her wonderful book The Sixth Extinction (which was a Skeptophilia Book of the Week a while back).  This week's book recommendation is her latest, which looks forward to where humanity might be going.
Under a White Sky: The Nature of the Future is an analysis of what Kolbert calls "our ten-thousand-year-long exercise in defying nature," something that immediately made me think of another book I've recommended -- the amazing The Control of Nature by John McPhee, the message of which was generally "when humans pit themselves against nature, nature always wins."  Kolbert takes a more nuanced view, and considers some of the efforts scientists are making to reverse the damage we've done, from conservation of severely endangered species to dealing with anthropogenic climate change.
It's a book that's always engaging and occasionally alarming, but overall, deeply optimistic about humanity's potential for making good choices.  Whether we turn that potential into reality is largely a function of educating ourselves regarding the precarious position into which we've placed ourselves -- and Kolbert's latest book is an excellent place to start.
[Note: if you purchase this book using the image/link below, part of the proceeds goes to support Skeptophilia!]