A couple of days ago, a friend and loyal reader of Skeptophilia sent me an email that said, "You think you know genetics, Mr. Smarty Pants?  Get a load of this."

He included a link to a site called Gostica: The Spiritual Path, in particular a post called "The Scientists Are Shocked: First Scientific Proof of God Found."  And in it, we hear that passages from the bible have shown up... 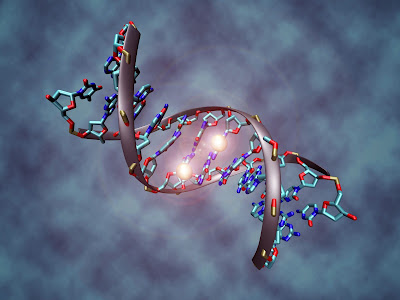 [Image licensed under the Creative Commons Christoph Bock, Max Planck Institute for Informatics, DNA methylation, CC BY-SA 3.0]
I'm not making this up.  I would strongly recommend your taking a look at the actual site, but not while you're drinking anything, because I will not be responsible for coffee sprayed all over your computer screen.

The fun starts, in fact, with the very first phrase of the first sentence: "Linguistic professors at Bob Jones University, long noted for its intellectual rigor..."

Intellectual rigor?  The school that has been nicknamed "The Buckle on the Bible Belt?"  The school whose biology program description states, "One of the benefits of studying biology at BJU is that you’ll get a top-notch science education from a thoroughly Christian perspective.  In addition to strengthening your faith in the reliability of the Bible, this perspective will also help prepare you to understand modern secular interpretations of science and apply a biblical worldview to them."?

The school whose behavior code explicitly forbids its students to wear denim skirts, have "fauxhawks," access an "unfiltered internet," or listen to "Rock, Pop, Country, Jazz, Electronic/ Techno, Rap/Hip Hop or the fusion of any of these genres"?

And in any case, who the hell wears denim skirts anymore?

So the "intellectually rigorous scientists" from Bob Jones University started looking at pieces of DNA, including "transposons and retrotransposons" (Ooh!  Big words!), and this is what they found:

[They] began to attempt to translate the decoded segments that W.I.T. was providing.  The structure was notably and demonstrably human in nature.  The coding language found, which utilized sequences of twenty-eight independent values, fell easily into the incidence range of known alphabets.  Sequences of independent connected values likewise mirrored the structure of word composition in human languages.  The Linguistic and Philology team at Bob Jones began an extensive comparison of the quizzical script found in the “Junk DNA” with the catalog of every recorded human language; hoping to find similar lingual threads so that they could begin to formulate translations of the message laying hidden in the DNA.  Professors were rocked with sheer awe when they found that one existent language, and one language alone, was a direct translatable match for the sequential DNA strands.

And guess what that language was, and what it said? You'll never guess.

The Language in the “Junk DNA”, the DNA that scientists had for years discarded as useless, was indistinguishable from ancient Aramaic.  Even more amazingly, as linguists started to translate the code within the human genome, they found that parts of the script it contained were at times remarkably close in composition to verse found in the Bible.  And at times contained direct biblical quotes.

On the human gene PYGB, Phosporomylase Glycogen, a non-coding transposon, holds a linguistic sequence that translates as “At first break of day, God formed sky and land.”  This bears a stunning similarity to Gen 1:1 “In the beginning, God created the heavens and the earth.”  Gene Bmp3 has a Retrotransposon sequence which translates to the well-known 1 Cor 6:19 “Do you not know that your body is a temple of the Holy Spirit, who is in you, whom you have received from God?  You are not your own.”  This is repeated over and over throughout the entire sequence of human DNA: embedded equivalent genetic code of ancient Aramaic that seems to translate as the word of God to his people.

Righty-o. Where do I start?

The first problem with this is that the "language" of DNA is composed of four letters (nitrogenous bases), A (adenine), G (guanine), C (cytosine), and T (thymine). So if that was the actual language of God, he'd be pretty much limited to saying stuff like "ACT TAG CAT GAG GAG GAG," although to my ears that sounds more like a pronouncement from Bill the Cat than it does like something the Divine Creator might say.  In any case, it's not really possible to spell out English using the DNA alphabet, much less ancient Aramaic.  Even if you make the allowance that maybe the "linguists" were using some kind of correspondence between the letters in Aramaic and the amino acid sequence coded for by a gene, you still only have twenty letters, not 28 as the article claims.

So what the amazingly rigorous researchers at BJU seem good at is making shit up and then lying to the media about it.  But this didn't stop them from shouting their findings from the rooftops:

Matthew Boulder, chief linguist for the project and professor of applied creation sciences at Bob Jones University, issued this statement: “As for the evidence- it is there and it is, to my view, undeniable.  The very word of God, elegantly weaved in and out of our very bodies and souls, as plain as day.  And the beauty of it, that God would lay down the words of truth in our very beings, shows his love and The Miracle.”

So to the reader who sent me the link, all I can say is thanks.  I did read the whole thing, and also the internal links that went to the BJU "research," so you can't say I didn't give it my all.  Throughout I was torn between guffawing and slamming my forehead repeatedly against my computer keyboard.  I hope that's the reaction you wanted.  But I do wonder what my own personal DNA spells out.  Maybe a passage from The Origin of Species, you think?
*********************************
Back when I taught Environmental Science, I used to spend at least one period addressing something that I saw as a gigantic hole in students' knowledge of their own world: where the common stuff in their lives came from.  Take an everyday object -- like a sink.  What metals are the faucet, handles, and fittings made of?  Where did those metals come from, and how are they refined?  What about the ceramic of the bowl, the pigments in the enamel on the surface, the flexible plastic of the washers?  All of those substances came from somewhere -- and took a long road to get where they ended up.
Along those same lines, there are a lot of questions about those same substances that never occur to us.  Why is the elastic of a rubber band stretchy?  Why is glass transparent?  Why is a polished metal surface reflective, but a polished wooden surface isn't?  Why does the rubber on the soles of your running shoes grip -- but the grip worsens when they're wet, and vanishes entirely when you step on ice?
If you're interested in these and other questions, this week's Skeptophilia book-of-the-week is for you.  In Stuff Matters: Exploring the Marvelous Materials that Shape Our Man-Made World, materials scientist Mark Miodownik takes a close look at the stuff that makes up our everyday lives, and explains why each substance we encounter has the characteristics it has.  So if you've ever wondered why duct tape makes things stick together and WD-40 makes them come apart, you've got to read Miodownik's book.
[Note: if you purchase this book using the image/link below, part of the proceeds goes to support Skeptophilia!]