Which sounds kind of awesome, but I've never had one.

I came close one time.  A while back I had a dream of being in a wedding party in a big old cathedral -- vaulted ceilings, stained glass, huge pipe organ, the works.  I don't recall recognizing the bride and groom, or (in fact) any of the other people present, but anyhow, there I was with other formally-dressed people, flanking the happy couple as they recited their vows.

When the priest got to the "if anyone objects to this marriage" bit, that's when things got weird.  An old lady in the front row stood up and said, "I object!" in a really nasal, grating voice.  She then began a recitation of how awful the bride and groom were, how she couldn't stand either of them, and how she was only there to let 'em both have it.  (You'd think, if both the bride and groom were horrible people, it'd be better to let them marry each other than to potentially ruin the lives of two other people, but apparently the old lady didn't see it that way.)

So I'm watching all this, aghast, and I had this sudden thought.  "This is so weird.  When does this ever happen in real life?  I must be dreaming."

I looked around, assessing the surroundings, and then kind of poked myself in the chest with my finger, and thought, "Huh.  I guess it's real after all.  How strange."

Doesn't it just figure?  I have my one and only opportunity to lucid dream, and when the time came to figure out if I was dreaming, I got the wrong answer. 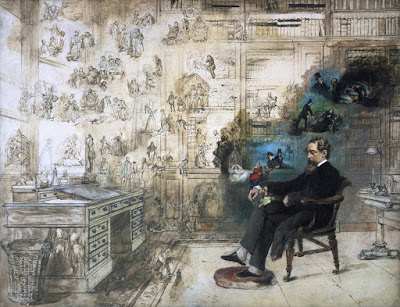 The subject comes up because of a study led by Karen Konkoly, professor of psychology at Northwestern University, which describes research done into people having lucid dreams -- and the potential for communicating with dreamers and having them answer questions or even follow simple commands.

Dreams take us to a different reality, a hallucinatory world that feels as real as any waking experience.  These often-bizarre episodes are emblematic of human sleep but have yet to be adequately explained.  Retrospective dream reports are subject to distortion and forgetting, presenting a fundamental challenge for neuroscientific studies of dreaming.  Here we show that individuals who are asleep and in the midst of a lucid dream (aware of the fact that they are currently dreaming) can perceive questions from an experimenter and provide answers using electrophysiological signals.  We implemented our procedures for two-way communication during polysomnographically verified rapid-eye-movement (REM) sleep in 36 individuals.  Some had minimal prior experience with lucid dreaming, others were frequent lucid dreamers, and one was a patient with narcolepsy who had frequent lucid dreams.  During REM sleep, these individuals exhibited various capabilities, including performing veridical perceptual analysis of novel information, maintaining information in working memory, computing simple answers, and expressing volitional replies.  Their responses included distinctive eye movements and selective facial muscle contractions, constituting correctly answered questions on 29 occasions across 6 of the individuals tested.  These repeated observations of interactive dreaming, documented by four independent laboratory groups, demonstrate that phenomenological and cognitive characteristics of dreaming can be interrogated in real time.  This relatively unexplored communication channel can enable a variety of practical applications and a new strategy for the empirical exploration of dreams.

It's a cool finding, but not that surprising when you think about it.  A lot of us have had experiences where outside (i.e. real) sounds have become incorporated into our dreams.  My wife once had a dream of hearing NPR, but when she checked, it wasn't coming from our stereo speakers.  So she wandered around the house, and finally found that it was coming from the microwave.  But unplugging the microwave still didn't shut off the news broadcast, and she proceeded to go from appliance to appliance, trying to figure out why our house had the ghostly voices of Doualy Xaykaothao and Ofebia Quist-Arcton and Soraya Sarhaddi Nelson coming out of nowhere.

Then she woke up, and found that her clock radio was on, and the news broadcast had become incorporated into her dream state.

Which, of course, brings up another, and more pressing question: why do NPR reporters have such awesome names?  I don't know anyone in real life who has a name as cool as Kai Ryssdal, Nedda Ulaby, and David Folkenflik.  I wonder if it's a condition of employment?

NPR interviewer: I'm happy to see that you've applied for a job as a reporter here at NPR.  What's your name?

NPR interviewer:  Oh, I'm sorry, that's not nearly cool enough.  Maybe you should see if MSNBC has any openings.

The lucid dreaming experiment definitely is cool, but it does open up some rather scary potential.  One of my favorite novels is Ursula LeGuin's The Lathe of Heaven, which involves a man named George Orr who not only has lucid dreams, his dreams change reality.  If he dreams that there was a plague five years ago that wiped out half the world's population, when he wakes up, that's what's happened.  The problem is, no one realizes the change but him.  When the past changed, everyone's memory changed as well, so George is the only person who recognizes that things are different.  Of course, any psychologist he tries to tell this is going to think he's crazy; the psychologist's memory changed along with everyone else's.  But one psychologist believes him -- and realizes that he can use George's peculiar power to reshape the world as he sees fit, by giving George suggestions while he's sleeping.

After that, things go downhill fast.

While the dream-changing-reality ability in LeGuin's incredibly inventive story isn't real, you have to wonder if other things might be.  Could a suggestion during a lucid dream change your memories, or create a memory of something that never happened?  Could it be used to overcome psychological issues like phobias -- or induce aversions where there were none previously?  Any time I hear about people trying to tap into the subconscious mind, it always gives me pause -- because being subconscious, we would very likely be at the mercy of whoever is controlling the experiment, just like the unfortunate George Orr in The Lathe of Heaven.

In any case, it's a compelling study about a topic I've always found fascinating.  As Konkoly et al. point out, we still don't know why people -- and apparently, other animals -- dream, but its ubiquity suggests that it serves some important purpose.  Not only that, we know that blocking REM sleep fairly quickly leads to hallucinations and psychotic symptoms, so whatever dreaming is doing for us, it's evidently critical for our mental health.

The Konkoly et al. study is only a first foray into this topic, so I'll be looking for more research springboarding off their findings.  I'm wondering if it might be possible for people who don't lucid dream to learn how.  I've seen advertisements for devices that are supposed to clue in the sleeper that (s)he is dreaming, and allow for learning how to control the internal dream state -- one I recall is a headband with an LED that activates when you go into REM -- but I haven't seen any particularly convincing evidence that they work.  It'd be cool if they did, though.  I'd love to learn to lucid dream.  Think of the fun you could have!  To start with, I could have told the old lady in the cathedral to shut up and sit down.  That'd have been nice, at least as a start.