No wands for you!

In today's contribution from the "So Weird I Couldn't Possibly Make It Up" department, the owner of a magical tools store in England is refusing to sell wands to Harry Potter fans because he says the wands he sells are real magic wands.  Like, that can cast spells and everything.

Richard Carter, owner of Mystical Moments in Slaithwaite, West Yorkshire, is miffed that he is being approached by customers who want one of his hand-made wooden wands not because they plan on using it for witchcraft, but because they fancy themselves candidates for Gryffindor.

"J.K. Rowling has obviously done her research but Harry Potter is for children," Carter told a reporter for The Telegraph.  "It has done nothing for business."

Well, obviously not, if you refuse to sell them your wands.  But it's kind of hard to imagine turning away customers throwing cash in your general direction as being a sound business strategy.

"You wouldn't believe how many real witches and wizards there are knocking about," Carter went on.  "You would be amazed.  They know they can come here in reveal themselves without people thinking they're mental...  I don't have customers who have been Harry Potterfied.  If I had someone come in wanting a wand just because they liked Harry Potter I would not sell them one, not matter how much money they were offering."

Which brings up how Carter could tell the Harry Potterfied people from the Potterless variety, since I'm guessing that once the word got out that he wasn't serving the Potterfied folks they wouldn't just walk in and announce what House they got sorted into.  But Carter is way ahead of any people who are thinking of sneaking:

He can tell the Potterfied customers by their aura.

Apparently he can also recognize the ones who intend to use the wand for evil purposes.  No Harry Potter fans or dark witches and wizards, that's Carter's motto.

So that goes double for you, Bellatrix Lestrange. 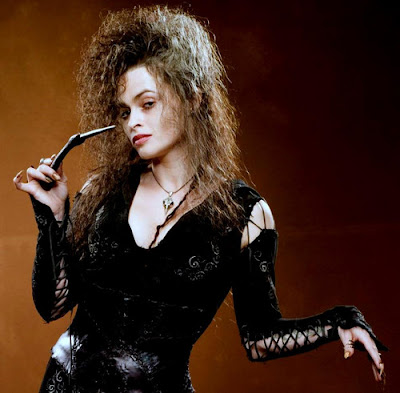 He seems like he's got a knack for making some pretty cool items, however.  He picks different woods for different uses -- oak for strength, chestnut for love, elm for balance, mahogany for spiritual growth.  Oh, and yew for immortality, because that's always a possibility, even considering that the Sorcerer's Stone is kind of out of the question.

He makes the wands on a lathe, but claims he has no background in wand-making at all.  "I have no training in woodwork.  I use spiritual guidance and don't know how any of the wands will turn out.  All you need for them to work is faith."

It bears mention that my son works on a lathe as part of his job every day -- a glass lathe, not a woodworking one, but same principle.  And he says, "Working on a lathe and expecting the spirits to tell you what to do sounds like a good way to lose a hand."

Carter's been lucky so far, apparently, because as of the time of this post he has both limbs attached and is still doing his thing.  And after making the wands, he anoints them with oil, and then puts them into a locked cabinet until the right witch or wizard comes along.

Predictably, local Hogwarts fans are a bit ticked off.  Slaithwaite Harry Potter enthusiast Mariella May said that Carter's refusal to sell wands to J. K. Rowling fans is like "McDonald's refusing to sell Happy Meals to sad people."  Which is an apt, and strangely hilarious, comparison.

Not everyone has had such a shoulder shrug of a reaction, though.  Fantasy author G. P. Taylor suggested that the shunned fans should take Carter to court.  Which opens up the possibility of Carter defending himself to a judge against a charge of discrimination based on how customers' auras tell him what variety of fiction they believe in.

See what I mean about this being way weirder than anything I could have made up?

So that's our dip in the deep end for today.  Me, I kind of admire Carter for his purity of purpose.  Isn't that supposed to be one of the guiding principles of good magic, or something?  Everything in balance, don't try to take advantage for your own gain.  So however weird it sounds to a doubter like myself, I hope that the publicity he's getting helps his sales -- only to bonafide witches and wizards, of course.
************************************
Science fiction enthusiasts will undoubtedly know the classic 1973 novel by Arthur C. Clarke, Rendezvous with Rama.  In this book, Earth astronomers pick up a rapidly approaching object entering the Solar System, and quickly figure out that it's not a natural object but an alien spacecraft.  They put together a team to fly out to meet it as it zooms past -- and it turns out to be like nothing they've ever experienced.
Clarke was a master at creating alien, but completely consistent and believable, worlds, and here he also creates a mystery -- because just as if we really were to find an alien spacecraft, and had only a limited amount of time to study it as it crosses our path, we'd be left with as many questions as answers.  Rendezvous with Rama reads like a documentary -- in the middle of it, you could easily believe that Clarke was recounting a real rendezvous, not telling a story he'd made up.
In an interesting example of life imitating art, in 2017 astronomers at an observatory in Hawaii discovered an object heading our way fast enough that it has to have originated outside of our Solar System.  Called 'Oumuamua -- Hawaiian for "scout" -- it had an uncanny, if probably only superficial, resemblance to Clarke's Rama.  It is long and cylindrical, left no gas or dust plume (as a comet would), and appeared to be solid rather than a collection of rubble.  The weirdest thing to me was that backtracking its trajectory, it seems to have originated near the star Vega in the constellation Lyra -- the home of the superintelligent race that sent us a message in the fantastic movie Contact.
The strangeness of the object led some to speculate that it was the product of an extraterrestrial intelligence -- although in fairness, a team in 2019 gave their considered opinion that it wasn't, mostly because there was no sign of any kind of internal energy source or radio transmission coming from it.  A noted dissenter, though, is Harvard University Avi Loeb, who has laid out his case for 'Oumuamua's alien technological origin in his new book Extraterrestrial: The First Sign of Intelligent Life Beyond Earth.
His credentials are certainly unimpeachable, but his book is sure to create more controversy surrounding this odd visitor to the Solar System.  I won't say he convinced me -- I still tend to side with the 2019 team's conclusions, if for no other reason Carl Sagan's "Extraordinary Claims Require Extraordinary Evidence" rule-of-thumb -- but he makes a fascinating case for the defense.  If you are interested in astronomy, and especially in the question of whether we're alone in the universe, check out Loeb's book -- and let me know what you think.
[Note: if you purchase this book using the image/link below, part of the proceeds go to support Skeptophilia!]