In the episode of Doctor Who called "The Ark in Space," the Fourth Doctor says, "Homo sapiens.  What an inventive, invincible species.  It's only a few million years since they crawled up out of the mud and learned to walk.  Puny, defenseless bipeds.  They've survived flood, famine and plague.  They've survived cosmic wars and holocausts.  And now, here they are, out among the stars, waiting to begin a new life.  Ready to outsit eternity.  They're indomitable."

I immediately thought of that quote yesterday afternoon as I watched NASA's Mars Rover Perseverance make a textbook-perfect landing on the surface of Mars.  It traveled a total of about 480 million kilometers, and despite being launched from a moving target at a different moving target, landed right where the scientists and technicians wanted it to.

To put that into perspective, I did a back-of-the-envelope calculation, and found that launching an object from Earth and hitting anywhere on Mars -- much less exactly the spot you wanted -- is analogous to aiming for, and hitting, an object the size of a pinhead from three hundred kilometers away. 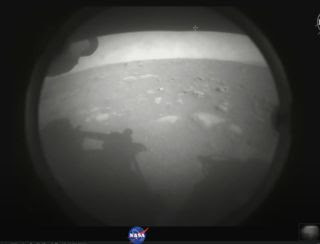 The first image sent back by Perseverance.  Don't be concerned by the distortion and the blur; this was taken with the landing camera, used by the onboard computer to target the landing site.  Subsequent images will be a great deal clearer.  [Image is in the Public Domain courtesy of NASA/JPL]

Everywhere we've looked lately we've seen bad news.  The pandemic.  Here in the United States, the economy, the nasty partisan divisiveness, the lying and sniping and blaming amongst people who are desperate not to be held responsible for what they've said and done.  Just this week, the horrible cold wave and winter storm that hit as far south as Texas, leaving people without electricity and water, the casualties of which have yet to be tallied.

We're a species capable of awful things.  What we do to each other based upon race, religion, sexual orientation, political beliefs, and gender is mind-boggling.  If there's a deity up there keeping score, humanity will have a lot to answer for.

We are also capable of incredible beauty, kindness, courage, compassion, love... and perseverance.  We are as surprising in the loftiness of our spirit as we sometimes are in the depth of our selfishness.  We're complex, full of contradictions and paradoxes, but can reach soaring highs, achieve things that almost beggar belief.

There were cheers and applause and high-fives when the announcement came that Perseverance had made a safe landing and was already sending back images from Mars's surface, and sitting here in my office, I was cheering along with them.  It illustrated once again how when we band together to accomplish something worthwhile, the sky is -- literally, in this case -- the limit.

I know that to people who aren't astronomy buffs, the Mars Rover Mission is probably no big deal, and might elicit a shrug and the question, "Why did they put all that money and time into this?"  Perseverance, and other endeavors like it, are important not only for the advancement of science, but are symbolic of what we can achieve.  It represents hope, it represents the potential for good in humanity, for reaching toward something beyond our petty concerns -- which often gets lost in all the bad news and dismal accounts of how we've fallen short.

So I hope you will watch as the images start to roll in, photographs of a landscape on another planet, and you will catch a little of the wonder of this moment.  Let it remind you that despite everything you read and hear, we're a pretty amazing species.  I'll end with another quote, this one from a poem that is justly famous -- "Desiderata" by Max Ehrmann.  I've read it many times, and even so it never fails to bring me to tears.  Here's how it ends, which seems a fitting way to wrap up this post:

And whether or not it is clear to you, no doubt the universe is unfolding as it should.  Therefore be at peace with God, whatever you conceive Him to be.  And whatever your labors and aspirations, in the noisy confusion of life, keep peace in your soul.  With all its sham, drudgery and broken dreams, it is still a beautiful world.  Be cheerful.  Strive to be happy.

*********************************
Back when I taught Environmental Science, I used to spend at least one period addressing something that I saw as a gigantic hole in students' knowledge of their own world: where the common stuff in their lives came from.  Take an everyday object -- like a sink.  What metals are the faucet, handles, and fittings made of?  Where did those metals come from, and how are they refined?  What about the ceramic of the bowl, the pigments in the enamel on the surface, the flexible plastic of the washers?  All of those substances came from somewhere -- and took a long road to get where they ended up.
Along those same lines, there are a lot of questions about those same substances that never occur to us.  Why is the elastic of a rubber band stretchy?  Why is glass transparent?  Why is a polished metal surface reflective, but a polished wooden surface isn't?  Why does the rubber on the soles of your running shoes grip -- but the grip worsens when they're wet, and vanishes entirely when you step on ice?
If you're interested in these and other questions, this week's Skeptophilia book-of-the-week is for you.  In Stuff Matters: Exploring the Marvelous Materials that Shape Our Man-Made World, materials scientist Mark Miodownik takes a close look at the stuff that makes up our everyday lives, and explains why each substance we encounter has the characteristics it has.  So if you've ever wondered why duct tape makes things stick together and WD-40 makes them come apart, you've got to read Miodownik's book.
[Note: if you purchase this book using the image/link below, part of the proceeds goes to support Skeptophilia!]