Requiem for a dead planet

If I had to pick my favorite episode of Star Trek: The Next Generation, the clear winner would be "The Inner Light."  Some classic episodes like "Darmok," "Frames of Mind," "Remember Me," "Time's Arrow," "The Chase," and "Best of Both Worlds" would be up there in the top ten, but "The Inner Light" not only has a beautiful story, but a deep, heartwrenching bittersweetness, made even more poignant by a tour-de-force performance by Patrick Stewart as Captain Jean-Luc Picard.

If you've not seen it, the plot revolves around the Enterprise encountering a huge space station of some kind, of apparent antiquity, and in the course of examining it, it zaps Captain Picard and renders him unconscious.  What his crew doesn't know is that it's dropped him into a dream where he's not a spaceship captain but an ordinary guy named Kamin, who has a wife and children and a job as a scientist trying to figure out what to do about the effect of his planet's sun, which has increased in intensity and is threatening devastating drought and famine. 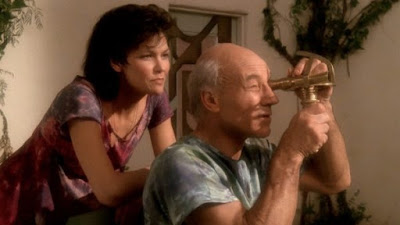 As Kamin, he lives for forty years, watching his children grow up, living through the grief of his wife's death and the death of a dear friend, and ultimately grows old without ever finding a solution to his planet's dire circumstances.  All the while, the real Captain Picard is being subjected to ongoing interventions by Dr. Crusher to determine what's keeping him unconscious, and ultimately unsuccessful attempts to bring him out of it.  In the end, which makes me ugly cry every damn time I watch it, Kamin lives to watch the launch of an archive of his race's combined knowledge, realizing that the sun's increase in intensity is leading up to a nova that will destroy the planet, and that their civilization is doomed.  It is, in fact, the same archive that the Enterprise happened upon, and which captured Picard's consciousness, so that someone at least would understand what the civilization was like before it was wiped out tens of thousands of years earlier.