In many places, people argue vehemently about politics, religion, or culture.  In my home place of southern Louisiana, the hill people will die on is whose grandma had the best gumbo recipe.

My mom was 100% Cajun, from a little town near Raceland, Louisiana, south of New Orleans.  Because of that, I grew up with amazing food, both in quality and quantity.  Jambalaya, hush puppies, oyster po'boys, courtbillon, boudin (Cajun sausage), crawfish, fried catfish...

In Cajun cuisine, the four food groups are onions, pepper, garlic, and grease.  Just about every recipe you pick up begins with, "First, you make a roux."  It's rich, spicy, and intensely flavored, but to say it's "calorie-dense" is a massive understatement.  Fortunately for me, I was born with a fast metabolism, but most Cajun food is not what I'd call diet-friendly.

I learned to cook as a teenager, mostly because I love to eat, and I didn't want when I moved away from home to go from my mom's phenomenal cooking to eating canned ravioli.  So I've become the chief cook in our family, and both our sons also learned to cook as teens, for much the same reasons that I did.  When I talk to my younger son, who lives in Houston, and he tells me he's got a pot of chicken gumbo simmering on the stove, it positively warms my heart.

His grandma's recipe, of course.

I've wondered for a while why Cajun food is so spicy.  And, by extension, why some cuisines are so bland.  My wife is Jewish, and she actually came up with a recipe for Cajun matzoh balls so that I would agree to eat them.  British cooking is notorious in that regard, although I will say that when I was in England I couldn't get enough of fish & chips, preferably washed down with a pint of stout.  On the other hand, the "mushy peas" I had when we were in Durham is an experience I'm not anxious to repeat.

Even Cajun food, however, doesn't hold a candle to the spiciness you find in southeast Asia.  My first time at a Thai restaurant, I was given the choice of 1 through 5 for spiciness, and I figured, "Hell, I'm Cajun, I'm tough" and went with a 3.

And spent the entire meal guzzling iced tea to put the fire out.  Heaven alone knows how anyone eats a "5" without spontaneously combusting.

I got to visit Malaysia a few years ago, and they have a sauce there called "sambal oelek" which is Malay for "bottle full of lava."  If you are ever fortunate enough to visit there, and it's offered to you, be brave -- but use it in moderation.  (And by "in moderation" I mean "one drop.") 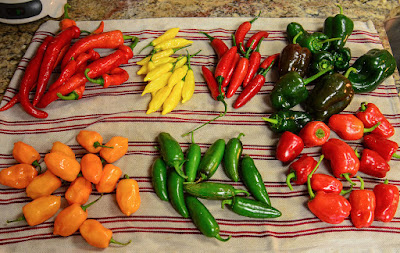 When I lived in Seattle, I went to a talk by a food scientist about the use of spices in different cultures, and he was of the opinion that the heat of a cuisine is directly proportional to the heat of the climate.  Many spices, he claimed, contain essential oils that are bactericidal, and also might cover up the taste of food that was a little past its expiration date.  So cold climates, like Scandinavia, with less need for spices to prevent and/or mask spoilage, have less spicy cuisines than (for example) India.

It seemed like a reasonable hypothesis, and most of us left the talk thinking, "Huh, who knew?  That's pretty cool."  But a study in Nature last week demonstrated that -- like a good many common-sense notions of how the world works -- it doesn't line up with reality.

Lindell Bromham, Alexander Skeels, Hilde Schneemann, Russell Dinnage, and Xia Hua (of Australian National University) did an exhaustive analysis of cuisines around the world, testing both that hypothesis and also the alternate conjecture that spicy cuisines arise only where the plants that produce those spices grow easily -- and found, surprisingly, that neither model accurately predicts food spiciness.  The authors write:

Spicier food in hot countries has been explained in terms of natural selection on human cultures, with spices with antimicrobial effects considered to be an adaptation to increased risk of foodborne infection.  However, correlations between culture and environment are difficult to interpret, because many cultural traits are inherited together from shared ancestors, neighbouring cultures are exposed to similar conditions, and many cultural and environmental variables show strong covariation.  Here, using a global dataset of 33,750 recipes from 70 cuisines containing 93 different spices, we demonstrate that variation in spice use is not explained by temperature and that spice use cannot be accounted for by diversity of cultures, plants, crops or naturally occurring spices.

The negative results here are as interesting as the conjectures themselves, and leave us with a bit of a puzzle.  The authors found a weak correlation between spice use and wealth -- many spices, even today with commercial farm production, are expensive -- but that doesn't really account for the distribution either, because most areas are a mix of wealthy and poor and all gradations in between, and in a particular region people mostly eat the same kinds of food (although of course there are differences both in quality and quantity of food available to different socioeconomic strata).

The end result is another unsatisfying example of "we don't really know why, but it seems to be complicated."  I've heard it suggested that once a cuisine is established with a particular repertoire of spices, babies learn to tolerate those flavors because some of the essential oils are passed along to the infant in breast milk.  (The obvious example is garlic -- people who eat a lot of garlic will find that their sweat eventually smells of it, although at that point it might be more obvious to their friends and family than it is to them.)  Even if that's true, it might explain the persistence of particular sets of spices in a culture, but doesn't explain why they got there in the first place.

All of which is fascinating, not only because I'm a foodie but because of my background in science.  It's always good to look at your assumptions about the world, because something that "seems right" is likely to go unquestioned in your mind.  It's why we have the scientific method; it's a way of rigorously testing claims, so that our biases in either direction can be analyzed in the clear light of data and inductive reasoning.

Anyhow, now I'm hungry.  Maybe I'll fix some scrambled eggs for breakfast, but only if I'm not out of hot sauce.  There is no point to scrambled eggs without hot sauce.  Although I think I'll pass on the sambal oelek.  Even I have my limits.

Oh, and it's my grandma.  My grandma clearly had the best gumbo recipe.  Thanks for asking.

*********************************
Back when I taught Environmental Science, I used to spend at least one period addressing something that I saw as a gigantic hole in students' knowledge of their own world: where the common stuff in their lives came from.  Take an everyday object -- like a sink.  What metals are the faucet, handles, and fittings made of?  Where did those metals come from, and how are they refined?  What about the ceramic of the bowl, the pigments in the enamel on the surface, the flexible plastic of the washers?  All of those substances came from somewhere -- and took a long road to get where they ended up.
Along those same lines, there are a lot of questions about those same substances that never occur to us.  Why is the elastic of a rubber band stretchy?  Why is glass transparent?  Why is a polished metal surface reflective, but a polished wooden surface isn't?  Why does the rubber on the soles of your running shoes grip -- but the grip worsens when they're wet, and vanishes entirely when you step on ice?
If you're interested in these and other questions, this week's Skeptophilia book-of-the-week is for you.  In Stuff Matters: Exploring the Marvelous Materials that Shape Our Man-Made World, materials scientist Mark Miodownik takes a close look at the stuff that makes up our everyday lives, and explains why each substance we encounter has the characteristics it has.  So if you've ever wondered why duct tape makes things stick together and WD-40 makes them come apart, you've got to read Miodownik's book.
[Note: if you purchase this book using the image/link below, part of the proceeds goes to support Skeptophilia!]