Ever heard of the Grindelwald Fluctuation?

Your first guess might have to do with Harry Potter, or possibly that it's an episode of The Big Bang Theory, but it's neither.  It refers to a sudden, catastrophic dive in average global temperature that occurred in the middle of the already-cold "Little Ice Age," that had started in around 1300 C.E. and didn't really draw to a close until the middle of the nineteenth century.  The Grindelwald Fluctuation was a seventy-year period that was cold even by comparison to that baseline.  It's named after the Grindelwald Glacier in Switzerland, which grew significantly during that time period.  The other results were grim -- crop failures, early (and unusually late) hard freezes, famine, widespread starvation.

I've been interested in the Little Ice Age for a long while, but I hadn't heard about this part of it before.  I started looking at the early parts of this Holocene cold period when I was doing my thesis research for my Master's Degree in linguistics, especially apropos of how it affected migrations (and thus linguistic intrusion) into the British Isles.  The Little Ice Age, though, had much a broader role in major historical events than simply changing where people went -- the Black Death of the 1340s and 1350s, that ravaged populations worldwide and literally wiped some towns off the map, was probably in part kicked off by falling temperatures and less food driving plague-carrying rats indoors, and into contact with humans.

I also have been fascinated by its effects on northern Europe, largely because of how it kind of stopped Viking/Scandinavian expansion in its tracks.  Danes and Norwegians had settled Iceland five centuries earlier, and in fact had even made inroads into Greenland -- then the climate shifted, sea lanes froze over, and weather turned stormy and hazardous, isolating Iceland and destroying the European settlements in coastal Greenland completely.  The thought of being stranded, of being the last colonist left alive in a desolate town knowing no one was coming to rescue me, was such a poignant image that it spurred me to write a piece of poetry called "Greenland Colony 1375"  that earned me the only award I've ever gotten for my writing -- second place in the Writers' Journal annual national poetry contest in 1999.  (If you're curious, you can read it at the link provided.)

The Grindelwald Fluctuation occurred in the midst of what was already the coldest weather humanity as a whole had experienced in recorded history, between the years 1560 and 1630.  The cause isn't certain, but may have to do with three huge volcanic eruptions in the Western Hemisphere (Colima in Mexico, Nevada del Ruiz in Colombia, and Huaynaputina in Peru) blowing dust and ash into the upper atmosphere, blocking sunlight and causing the temperatures to fall. 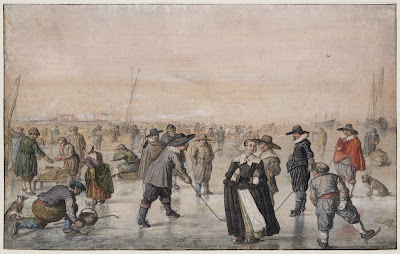 Hendrick Avercamp, A Scene on the Ice (ca. 1625) [Image is in the Public Domain]

Whatever the reason, it took a bad situation and made it far worse.  A paper in The Journal of the Royal Meteorological Society called "Weird Wether in Bristol During the Grindelwald Fluctuation," by Evan Jones and Rose Hewlett (of the University of Bristol) and Anson Mackay (of University College London), considers historical records documenting the experiences of the people who lived through it.  The paper is well worth reading in its entirety, so I won't steal their thunder by extensive quotes, but here's one of the records they cite, from the year 1607:

November the 20th 1607 began a frost which lasted till the 8th February following at which time the River of Severn and Wye were so hard frozen that people did pass on foot from side unto the other and played gambols and made fires to roast meat upon the ice.  No long trows etc could come to Bristol and when the ice broke away there came swimming down with the current of the tide great massy flakes of ice which endangered many ships that came up the [Bristol] Channel into Kingroad.  The continuance of the frost starved a great number of birds, and made corn sell very dear.

Anyone who knows the climate of coastal southwestern Britain can attest that a hard freeze lasting over three months is unheard of.  The sharp drop in temperature precipitated not only frigid temperatures but violent winter storms -- there's record after record describing catastrophic floods, windstorms, and snowstorms.

If the whole thing puts you in mind of this century's swing of temperature in the opposite direction, the authors want to make sure that point doesn't escape readers.  In the conclusion of the paper, they write:

Links between anthropogenic climate change in the modern world and different types of extreme weather events are now well established.  This could increase the costs of weather‐related hazards for about 350 million people across Europe in the coming decades, accompanied by a 50‐fold increase in weather‐related fatalities.  Such models fit with anecdotal evidence that the world is already experiencing more extreme weather. Recent examples in the United Kingdom include the record temperature highs of December 2019 and the Severn Valley floods of February 2020...

The economic, political and cultural context of the seventeenth century was... very different to that of the twenty‐first century...  Yet, despite these differences, the climate and weather of the early modern period provides a reminder of how destructive climate change and severe weather can be in both the short and long term.

The twentieth and early twenty-first century have had their own climate catastrophes, most of them due to a combination of natural and human causes -- the Dust Bowl of the 1930s, the Ethiopian Famine of 1983-1985, the catastrophic droughts in Australia from 1939 to 1945 and from 1997 to 2009, the 2019 heatwave in India, and wildfires that have become a nearly annual occurrence in Indonesia.  No one honestly evaluating the evidence has any doubt of the role that anthropogenic carbon dioxide has in these events, nor its role in the general warm-up the entire world is experiencing.
I am tentatively hopeful now that there's an administration in the United States that isn't being run by a combination of crazy people and shills for the fossil fuels industry, but my fear is that even if we brake hard, we're still going to have a bad time of it.  Whether the climatic teeter-totter has truly passed a tipping point is unknown.  Plus, there's the purely pragmatic aspect of whether we could act fast enough to make a difference even in a best-case scenario.  Anyone realistic knows that the chance of every large economy in the world suddenly shucking fossil fuel dependence and going renewable is slim to none.  (It'd be nice, but still.)
But maybe people will wake up, now that at least here in the United States we have leaders who acknowledge the problem and our role in it.  Any efforts to turn us around are better than nothing; the GOP's embrace of Sarah Palin's mantra "Burn, baby, burn" has done nothing but put us deeper into the pressure cooker.
But maybe -- just maybe -- having a president who is actually capable of reading and understanding a scientific paper like this week's Jones et al. study will give us a desperately needed step in the right direction.
************************************
Science fiction enthusiasts will undoubtedly know the classic 1973 novel by Arthur C. Clarke, Rendezvous with Rama.  In this book, Earth astronomers pick up a rapidly approaching object entering the Solar System, and quickly figure out that it's not a natural object but an alien spacecraft.  They put together a team to fly out to meet it as it zooms past -- and it turns out to be like nothing they've ever experienced.
Clarke was a master at creating alien, but completely consistent and believable, worlds, and here he also creates a mystery -- because just as if we really were to find an alien spacecraft, and had only a limited amount of time to study it as it crosses our path, we'd be left with as many questions as answers.  Rendezvous with Rama reads like a documentary -- in the middle of it, you could easily believe that Clarke was recounting a real rendezvous, not telling a story he'd made up.
In an interesting example of life imitating art, in 2017 astronomers at an observatory in Hawaii discovered an object heading our way fast enough that it has to have originated outside of our Solar System.  Called 'Oumuamua -- Hawaiian for "scout" -- it had an uncanny, if probably only superficial, resemblance to Clarke's Rama.  It is long and cylindrical, left no gas or dust plume (as a comet would), and appeared to be solid rather than a collection of rubble.  The weirdest thing to me was that backtracking its trajectory, it seems to have originated near the star Vega in the constellation Lyra -- the home of the superintelligent race that sent us a message in the fantastic movie Contact.
The strangeness of the object led some to speculate that it was the product of an extraterrestrial intelligence -- although in fairness, a team in 2019 gave their considered opinion that it wasn't, mostly because there was no sign of any kind of internal energy source or radio transmission coming from it.  A noted dissenter, though, is Harvard University Avi Loeb, who has laid out his case for 'Oumuamua's alien technological origin in his new book Extraterrestrial: The First Sign of Intelligent Life Beyond Earth.
His credentials are certainly unimpeachable, but his book is sure to create more controversy surrounding this odd visitor to the Solar System.  I won't say he convinced me -- I still tend to side with the 2019 team's conclusions, if for no other reason Carl Sagan's "Extraordinary Claims Require Extraordinary Evidence" rule-of-thumb -- but he makes a fascinating case for the defense.  If you are interested in astronomy, and especially in the question of whether we're alone in the universe, check out Loeb's book -- and let me know what you think.
[Note: if you purchase this book using the image/link below, part of the proceeds go to support Skeptophilia!]