When I was a graduate student in the School of Oceanography at the University of Washington -- an endeavor that lasted one semester, at which point I realized that I had neither the focus nor the brainpower to succeed as a research scientist -- I found an interesting commonality amongst the graduate students I hung out with.
This group of perhaps eight or nine twenty-somethings were without question the most vulgar, profane group I have ever been part of.  Regular readers of Skeptophilia, not to mention my friends and family, will know that my own vocabulary isn't exactly what anyone would call "prim and proper;" but while I am not averse to seasoning my speech with the occasional swear word, these people basically dumped in the entire spice cabinet.
The words "fuck" and "fuckin'" were like a staccato percussive beat to just about every sentence uttered.  You didn't say, "I gotta go to class," you said, "I fuckin' gotta go to class."  It was so bad most of us didn't even hear it any more, it was just "how we talked."  (And, I might add, it had the result of making those words completely lose their punch, and thus their effectiveness as emotionally-packed language.)  I have no idea why this particular group was so prone to obscene speech -- as you might expect, they were smart, scientifically-minded people with commensurately large vocabularies to choose from -- but once that became the norm, it was what one did to fit in.
What's most interesting is that when, at the end of that semester, I switched to the School of Education and started the track toward becoming a high school science teacher (a much more felicitous choice, as it turned out), I almost instantly adjusted my vocabulary to reflect the far more squeaky-clean speech of the Future Teachers of America.  I didn't have to think much about it; it wasn't like I had to obsessively watch my mouth until I learned how to control it.  The change was quick and required very little conscious thought to maintain.
This phenomenon is called code switching.  In its broadest definition, code switching occurs when a bilingual person flips between his/her two languages depending on the language of the listeners.  But context-dependent code switching occurs whenever we jump from one group we belong to into a different one, or from a group of strangers to a group of friends. 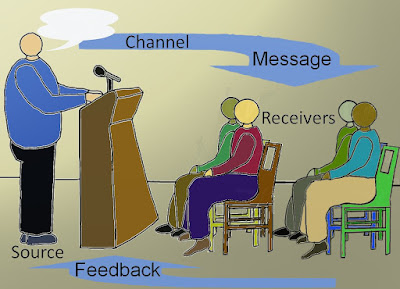 [Image licensed under the Creative Commons JasonSWrench, Transactional comm model, CC BY 3.0]
Code switching occurs in written language, too.  I write here at Skeptophilia, I write fiction, I have written science curriculum, I write emails to family, friends, coworkers, and total strangers (like the guy at the software company helpdesk and the woman at the bank who oversees our mortgage).  In each of those, my vocabulary, sentence structure, and degree of formality are different, not only in the words I choose, but in how exactly they're used.  Some of the differences are obvious; my wife gets emails ending with "xoxoxoxoxo;" my friends, usually with "cheers, g," and people I've contacted over business matters, "thank you so much, sincerely, Gordon."  (I'm a bit absent-minded at the best of times, and I live in fear of the day I send the guy at the helpdesk an email ending with the hugs-and-kisses signoff.)
But it turns out that these differences are apparent in other, more subtle ways.  A study out of the University of Exeter that appeared in the journal Behavior Research Methods this week describes a protocol for detecting code switching that had an accuracy of 70% -- even when they didn't look at words that would be obvious giveaways.
The researchers used an automated linguistic analysis program to look at writing done by the same people in two different contexts.  The participants in the study were chosen because they were active in two different sorts of social media groups, some having to do with parenting and others gender equity, and the software was given passages they'd written in both venues -- with tipoff words like "childcare" and "feminism" removed.  It turned out the program was still able to discern which social media group the passage had been directed toward, simply by looking at structural features like use of pronouns and meaning-based characteristics like the number of emotionally-laden words used per paragraph.

"It is the first method that lets us study how people access different group identities outside the laboratory on a large scale, in a quantified way," said study lead author Miriam Koschate-Reis, in an interview with Science Daily.  "For example, it gives us the opportunity to understand how people acquire new identities, such as becoming a first-time parent, and whether difficulties 'getting into' this identity may be linked to postnatal depression and anxiety.  Our method could help to inform policies and interventions in this area, and in many others."
Koschate-Reis and her team are next going to look into whether this kind of code switching is facilitated by location -- if, for example, an informal-to-formal switch might be easier in an academic location like a library than it is in a relaxed setting like a café.
In other words, if it might be better not to work on your dissertation in Starbucks.
All of which is fascinating, and once again points out the complexity of human communication -- and why it's so hard to get an artificial neural network to mimic written conversation convincingly.  Most of us code switch automatically, without even being aware of it, as we navigate daily through the many groups to which we belong.  Most AI speech I've seen, even if responses are contextually correct and use the right vocabulary with the right structure, have a inflexible stilted quality that is lacking in the generally more sensitive, free-flowing communication that happens between real people.  But perhaps that's another application that the Koschate-Reis et al. research might have; if a linguistic analysis software can learn to detect code switching, that's the first step toward an AI actually learning how to apply it.
One step closer to passing the Turing Test.
In any case, I'd better run along and get my fuckin' day started.  I hope y'all have a good one.  Hugs & kisses. 💘