The necessity of safety

I suppose it's a good sign when what I write grabs me by the emotions and swings me around, and it bodes well for the story having the same effect on my readers.  There are a few scenes that make me choke up every time I read them -- one of which boils down to a single line of dialogue.
In the story, one of the main characters wakes up in the middle of the night to find that his partner, who has gone through some terrible emotional trauma, is crying silently, obviously trying not to wake him up.  He pulls his lover into a hug and whispers, "Go ahead and cry if you need to.  I've got you.  You're safe in my arms."
What got me thinking about this scene is a conversation I had with some online writer friends, one of whom asked the provocative and fascinating question, "How could you tell someone 'I love you' without using those words?"  My immediate response was "You are safe."  Those words resonate with me for a great many reasons, not least because I virtually never felt safe as a child or young adult.  Everything around me always seemed precarious -- I spent the first half of my life feeling like I was a tightrope walker, always a single misstep from utter ruin, and because of that needed to be constantly vigilant and wary.
It was exhausting.
The pragmatists in the audience might point out that in reality none of us are safe, and technically they'd be right.  Bad stuff can happen any time, for any reason or no reason at all, and as the line from Fight Club says, "On a long enough timeline, the survival rate for everyone drops to zero."  But still, that feeling of safety and security, that there's someone looking out for you and that your friends have your back, is pretty critical for our emotional health.
These days, a sense of safety is hard to find.  We're still in the midst of a pandemic, trying to guard ourselves against an invisible enemy that can jump from one person to another with frightening speed.  Here in the United States almost a half a million people have died of COVID, and countless others have become desperately ill with complications lasting for months.  Everywhere people are losing their jobs, businesses closing down, schools going entirely virtual.  Health care workers are facing the awful double-whammy of dealing with incredible overwork and the fact that despite their best efforts, some of their patients aren't going to survive.  Add to all that the fact that in many parts of the world we've seen unprecedented social unrest, with deep-seated hatred and prejudice bubbling up nearly everywhere -- and its victims are often people who just happen to be in the wrong place at the wrong time.
Security is in very short supply lately.
Three separate studies conducted late last year track the outcome.  The United States Center for Disease Control, Boston University, and Johns Hopkins University independently found that the incidence of anxiety, severe depression, and serious psychological distress has tripled since the start of the pandemic.  Unsurprisingly, the effect was larger in vulnerable populations -- low-income individuals, minorities, people with prior mental health issues, people who have lost friends or family members to COVID.  Most alarming, young adults across the board showed skyrocketing incidence of emotional distress -- the CDC study found that almost two-thirds of the people from eighteen to twenty-four who participated in the study reported experiencing severe depression since the outbreak started, a quarter reported greater use of alcohol or drugs to cope with the stress, and a quarter said they'd seriously considered suicide in the last thirty days.
This is horrifying and alarming.  We already had a built-in mental health crisis ongoing because of the stigma of mental illness and our society's unwillingness to radically revamp the way it's monitored, treated, and covered by insurance.  COVID has taken a dreadful situation and made it much, much worse, and I fear the repercussions will far outlast the pandemic itself.
The worst part is that the nature of the pandemic has taken away the one thing that can make emotional distress bearable; comfort from our friends and loved ones.  I was talking with some friends (online, of course) a few days ago about what we miss most from the pre-pandemic days, and one that came up over and over was "long hugs from friends."  I'm terribly shy by nature, but that one was spot-on.  Even we introverts are struggling with the isolation. 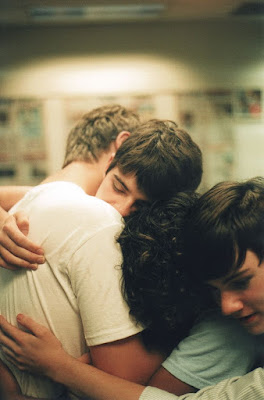 [Image licensed under the Creative Commons Smellyavocado, Bromances, CC BY-SA 3.0]
Unfortunately, it looks like we are going to be going without long hugs from friends for quite some time, and that means we need to be especially assiduous about looking out for each other.  Check in with the people you care about, especially the ones who don't seem to need it, who are used to being the strong, secure, competent ones who put everyone else's needs in front their own.  Okay, we can't have the level of physical and emotional real-time contact we had before, but we can do things to compensate -- Zoom or Skype visits, phone calls, even something simple like a text message saying, "Hi, I was thinking about you.  How are you doing?"
In times like these we have to lean on our friends -- and let our friends lean on us.  Be honest about what you're feeling, and reassure yourself that right now we're pretty much all feeling that way.  If you're having a hard time coping, let the people you love know rather than suffering in silence.  If you are really at the end of your tether, get on the phone -- the suicide prevention hotline is 1-800-273-8255.  There's help to be had if you are willing to reach out for it.
We'll get through this, but if we're to come through as unscathed as possible, it will be because we've banded together and helped each other through.  Don't be afraid to show others you're hurting; it's how you'll get past this horrible low point.
And don't be afraid to tell your friends and loved ones, "Go ahead and cry if you need to.  I've got you."  It may be a while before we can back it up with a long hug, but for now, it's the best we can do.
************************************
Science fiction enthusiasts will undoubtedly know the classic 1973 novel by Arthur C. Clarke, Rendezvous with Rama.  In this book, Earth astronomers pick up a rapidly approaching object entering the Solar System, and quickly figure out that it's not a natural object but an alien spacecraft.  They put together a team to fly out to meet it as it zooms past -- and it turns out to be like nothing they've ever experienced.
Clarke was a master at creating alien, but completely consistent and believable, worlds, and here he also creates a mystery -- because just as if we really were to find an alien spacecraft, and had only a limited amount of time to study it as it crosses our path, we'd be left with as many questions as answers.  Rendezvous with Rama reads like a documentary -- in the middle of it, you could easily believe that Clarke was recounting a real rendezvous, not telling a story he'd made up.
In an interesting example of life imitating art, in 2017 astronomers at an observatory in Hawaii discovered an object heading our way fast enough that it has to have originated outside of our Solar System.  Called 'Oumuamua -- Hawaiian for "scout" -- it had an uncanny, if probably only superficial, resemblance to Clarke's Rama.  It is long and cylindrical, left no gas or dust plume (as a comet would), and appeared to be solid rather than a collection of rubble.  The weirdest thing to me was that backtracking its trajectory, it seems to have originated near the star Vega in the constellation Lyra -- the home of the superintelligent race that sent us a message in the fantastic movie Contact.
The strangeness of the object led some to speculate that it was the product of an extraterrestrial intelligence -- although in fairness, a team in 2019 gave their considered opinion that it wasn't, mostly because there was no sign of any kind of internal energy source or radio transmission coming from it.  A noted dissenter, though, is Harvard University Avi Loeb, who has laid out his case for 'Oumuamua's alien technological origin in his new book Extraterrestrial: The First Sign of Intelligent Life Beyond Earth.
His credentials are certainly unimpeachable, but his book is sure to create more controversy surrounding this odd visitor to the Solar System.  I won't say he convinced me -- I still tend to side with the 2019 team's conclusions, if for no other reason Carl Sagan's "Extraordinary Claims Require Extraordinary Evidence" rule-of-thumb -- but he makes a fascinating case for the defense.  If you are interested in astronomy, and especially in the question of whether we're alone in the universe, check out Loeb's book -- and let me know what you think.
[Note: if you purchase this book using the image/link below, part of the proceeds go to support Skeptophilia!]