The strangest flower on Earth

Anyone know what the world's largest flower is?

Chances are, some of you know that honor goes to the bizarre Indonesian species Rafflesia arnoldi, which produces flowers that can get to be 120 centimeters across.  Not only are they huge, they are (1) really weird-looking, and (2) smell like rotting meat in order to attract the flies that pollinate them. 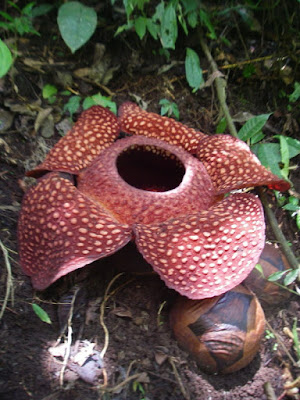 The first time I saw a photograph of this plant, I was immediately reminded of the Lost in Space episode "Attack of the Monster Plants," which was a real favorite of mine when I was a kid, not only because who wouldn't love a show about monster plants, but because Judy Robinson was in peril during this episode and to say I was madly in love with Judy Robinson is rather an understatement. 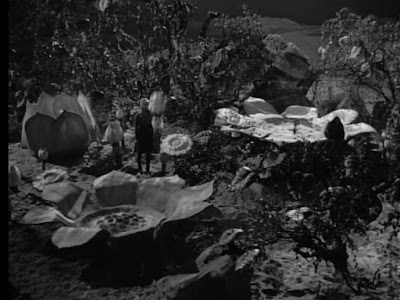 Be that as it may, the reality of Rafflesia is almost as weird as Judy's spaceship-fuel-eating alien plants.  The flower is enormous but the rest of the plant is minuscule, only a thin ribbon of translucent tissue that punctures the roots of vines of the rainforest genus Tetrastigma, getting all its nutrients from the host plant rather than from photosynthesis.  The only time any part of the plant is above ground is when it's flowering.  After that, the flowers wither, the fruits containing thousands of nearly microscopic seeds that are thought to be dispersed when tree shrews eat the fruit and poop out the seeds somewhere else.  But the plant's rarity, and the fact that during most of its life cycle you could walk right by it (or more likely, over it) without knowing, not that much is known for sure.

Another thing that's surprising about the family (Rafflesiaceae) is that its nearest relatives are euphorbias -- which include a huge range of plants united by having tiny, insignificant flowers and milky toxic sap and looking absolutely nothing like Rafflesia.  A number of euphorbs look superficially like cacti, with reduced or absent leaves and sharp spines, but the milky sap and inconspicuous flowers would clue you in to the fact that the similarities are due to convergent evolution.  The most familiar euphorb is the poinsettia -- the bright red, pink, or cream-colored parts are not actually petals but modified leaves.  (The flowers themselves are the little b-b sized bits at the center.)

So what this shows is that to figure out evolutionary relationships, you can't rely on what things look like.  As odd as it is, the spiky candelabra spurge (Euphorbia ingens) is a cousin of the bizarre Rafflesia. 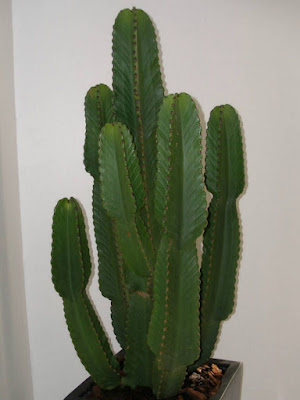 If all that isn't weird enough, consider a study that just came out a couple of weeks ago in Current Biology that looked at another member of Rafflesiaceae, the genus Sapria.  (They're very similar to Rafflesia, differing only in a few not-very-significant botanical details.)  This study did an extensive analysis of the genetics of Sapria, and found something bizarre; during its descent from its euphorbia-like ancestors, Sapria (and presumably the rest of the family Rafflesiaceae) has not only lost just about all of its physical structure, but half of its genome -- including the entire array of genes that produce chloroplasts.  Stranger still, in the process it has picked up genetic material from its host, something called horizontal transfer.

So this puts paid to the incorrect notion a lot of people have that evolution always makes things bigger, stronger, smarter, and more complex.  Evolution is the law of whatever works at the time, and if what works is to jettison half the DNA along with chloroplasts, leaves, and true roots, that can happen.  And if you think about it, it makes sense; if you're a plant that spends nearly its entire life underground, why waste resources making structures like leaves and chloroplasts, not to mention all the proteins and pigments that go into making them work?  The oddest thing about the genetics, though, is that a lot of the genes that Sapria has picked up from its hosts don't seem to do anything; they appear to be "non-coding regions" of DNA that don't have any obvious function.  "There's something weird and different going on in this species," said Tim Sackton of Harvard University, who co-authored the paper, in an interview with Science News.  "Maybe these organisms that stretch the boundaries of existence tell us something about how far the rules can be bent before they can be broken."

Rafflesia and its relatives are certainly some of the strangest members of the plant kingdom, so much so that you have to wonder what other peculiarities are going to be uncovered by further analysis.  I just hope we don't find out that it eats rocket fuel and creates evil duplicates of people, because Judy Robinson barely escaped with her life, and that is not okay.

*********************************
Science writer Elizabeth Kolbert established her reputation as a cutting-edge observer of the human global impact in her wonderful book The Sixth Extinction (which was a Skeptophilia Book of the Week a while back).  This week's book recommendation is her latest, which looks forward to where humanity might be going.
Under a White Sky: The Nature of the Future is an analysis of what Kolbert calls "our ten-thousand-year-long exercise in defying nature," something that immediately made me think of another book I've recommended -- the amazing The Control of Nature by John McPhee, the message of which was generally "when humans pit themselves against nature, nature always wins."  Kolbert takes a more nuanced view, and considers some of the efforts scientists are making to reverse the damage we've done, from conservation of severely endangered species to dealing with anthropogenic climate change.
It's a book that's always engaging and occasionally alarming, but overall, deeply optimistic about humanity's potential for making good choices.  Whether we turn that potential into reality is largely a function of educating ourselves regarding the precarious position into which we've placed ourselves -- and Kolbert's latest book is an excellent place to start.
[Note: if you purchase this book using the image/link below, part of the proceeds goes to support Skeptophilia!]