Vanished into the triangle

My thought process is like a giant game of free association at the best of times, and there have been occasions when I've tried to figure out how I got (for example) from thinking about a news story from Istanbul, Turkey to pondering nettle plants' dependency on phosphorus in the soil, and reconstructing the chain by which I got from one to the other has proven impossible.

But even considering the labyrinthine recesses of my brain, I think I'm to be excused if a link sent to me by a friend immediately reminded me of a short story by H. P. Lovecraft.  My dear friend, the brilliant author K. D. McCrite, messaged me saying "this immediately made me think of you," along with a link to a YouTube video called "Five Strange Disappearances in Vermont's Bennington Triangle."  The video, which is well-researched and pretty damn creepy, is about five unsolved disappearances in rural southwestern Vermont between 1945 and 1950, and despite my decades of interest in the paranormal, of which I had never heard.  The victims all were seen by multiple witnesses shortly before they vanished, and in fact one of them reputedly evaporated while on a public bus -- at stop A, he was there in his seat, and by stop B he was gone, despite the bus being in continuous motion the entire time and no one noticing his moving, much less leaping out of an open window or something.

The five -- Middle Rivers, Paula Welden, James Tedford, Paul Jephson, and Frieda Langer -- varied in age from eight to seventy-four, and their personal lives had nothing particular in common.  They all disappeared in the late fall or early winter in the region of Glastenbury [sic] Mountain, and with the exception of Langer, no trace of them was ever found despite extensive searching.  Langer's badly-decomposed body was found seven months later, but there was no apparent cause of death.  (The strangest part is that Langer's body was found very close to the last reported sighting of Paula Weldon.) 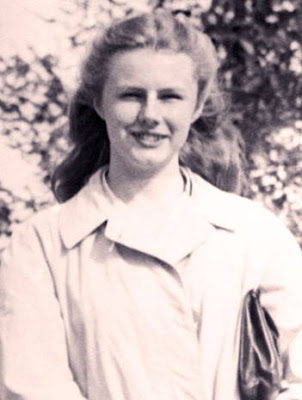 One of the last known photographs of Paula Welden

Interestingly, even though these five are considered the canonical Bennington Triangle cases, there are at least four other unexplained disappearances in the area -- one in 1942 and three in 1949 -- that some people think are related.  Additionally, the Bennington Banner did a piece on the topic back in 2008, starting with the much more recent account of a local man, an experienced hiker, who got lost for almost a day on a straightforward three-mile hike in the area, and upon finding his way back, reported that he had become disoriented and dizzy.  He ended up stopping for the night, and when the morning came he was six miles away from where he thought he was -- and on the walk back passed landmarks that included "stuff that [he didn't recognize, but] couldn't have missed."

Immediately I was reminded of Lovecraft's wildly terrifying short story "The Whisperer in Darkness," not only because it's about strange disappearances, but because it is set in the same part of Vermont.  The main character, Henry Akeley, writes a panicked letter to a friend that he's been hearing "voices in the air," and has become convinced that there are invisible creatures in the woods stalking and abducting the unwary, and that he's doomed for sure but wanted to let someone know what had happened to him because he's going to go missing very soon, and that the friend should under no circumstances interfere or attempt to help him.  Of course, being that this is a Lovecraft story, the friend says, basically, "Okay, be right over, bro," and it doesn't end well for either of them.

The disappearances -- the real ones, not the ones in Lovecraft -- are well enough documented that they merit a Wikipedia page, and more details (although less in the way of rigor) can be found on a page over at All That's Interesting.  Apparently the area has a bad reputation, at least amongst aficionados of the paranormal; it's supposedly a hotspot for Bigfoot and UFO sightings, and was feared and avoided by the local Native Americans (that bit seems to be an almost compulsory filigree to these kinds of stories).   I also saw more than one reference to alleged cases of "voices being heard on dead-air radio," but I wasn't able to find any independent corroboration of the claim.

But "voices in the air," amirite?  I think I'm to be excused for thinking of Lovecraft's dark tale.

The more pragmatic people approaching this story -- I'm one, which is probably unsurprising -- suspect that if the five canonical cases weren't the work of a serial killer, then it's simply a case of people going off into wilderness and doing something stupid that kills them.  The southern part of Vermont is largely trackless forest, and even though I'm an experienced back-country hiker and camper, I would make plenty sure to have survival gear, water, and food if I went off by myself into those mountains.  I know first-hand how big the wilderness is and how easy it is to get lost or have a mishap.  (Didn't stop me from solo camping in the Cascades and Olympics when I was young and reckless; that I survived unscathed is more a testimony to my luck than my brains.)

Still, there's something about both of those explanations that is unsatisfying, largely because of the completely different circumstances of each disappearance.  Tedford, as I mentioned, vanished from a public bus.  Eight-year-old Paul Jephson was accompanying his mother in a pickup truck as she drove around her family's acreage -- she stopped to do some chores, was gone a short time, and when she came back, the little boy was nowhere to be found.  Langer disappeared while hiking with a friend -- she'd gotten wet and decided to make the quick half-mile return to camp to change her clothes, but never got there.  Her body was found near a reservoir several miles away the following year -- in an area that had been searched extensively after her disappearance.

So all in all: pretty freakin' creepy.  Thanks to K. D. for cluing me in to a story that, all paranormal trappings aside, you have to admit is a curious one, and which admits of no obvious explanation.

Oh, and if you're wondering: Istanbul > Byzantine Empire > the Plague of Justinian (mid-sixth century) > the problems with burial of disease victims during an epidemic > bones enrich soil phosphorus > a proposal to use distribution of nettle plants in England to identify mass burial sites of people who died during the Black Death.  See?  Makes perfect sense.

************************************
Science fiction enthusiasts will undoubtedly know the classic 1973 novel by Arthur C. Clarke, Rendezvous with Rama.  In this book, Earth astronomers pick up a rapidly approaching object entering the Solar System, and quickly figure out that it's not a natural object but an alien spacecraft.  They put together a team to fly out to meet it as it zooms past -- and it turns out to be like nothing they've ever experienced.
Clarke was a master at creating alien, but completely consistent and believable, worlds, and here he also creates a mystery -- because just as if we really were to find an alien spacecraft, and had only a limited amount of time to study it as it crosses our path, we'd be left with as many questions as answers.  Rendezvous with Rama reads like a documentary -- in the middle of it, you could easily believe that Clarke was recounting a real rendezvous, not telling a story he'd made up.
In an interesting example of life imitating art, in 2017 astronomers at an observatory in Hawaii discovered an object heading our way fast enough that it has to have originated outside of our Solar System.  Called 'Oumuamua -- Hawaiian for "scout" -- it had an uncanny, if probably only superficial, resemblance to Clarke's Rama.  It is long and cylindrical, left no gas or dust plume (as a comet would), and appeared to be solid rather than a collection of rubble.  The weirdest thing to me was that backtracking its trajectory, it seems to have originated near the star Vega in the constellation Lyra -- the home of the superintelligent race that sent us a message in the fantastic movie Contact.
The strangeness of the object led some to speculate that it was the product of an extraterrestrial intelligence -- although in fairness, a team in 2019 gave their considered opinion that it wasn't, mostly because there was no sign of any kind of internal energy source or radio transmission coming from it.  A noted dissenter, though, is Harvard University Avi Loeb, who has laid out his case for 'Oumuamua's alien technological origin in his new book Extraterrestrial: The First Sign of Intelligent Life Beyond Earth.
His credentials are certainly unimpeachable, but his book is sure to create more controversy surrounding this odd visitor to the Solar System.  I won't say he convinced me -- I still tend to side with the 2019 team's conclusions, if for no other reason Carl Sagan's "Extraordinary Claims Require Extraordinary Evidence" rule-of-thumb -- but he makes a fascinating case for the defense.  If you are interested in astronomy, and especially in the question of whether we're alone in the universe, check out Loeb's book -- and let me know what you think.
[Note: if you purchase this book using the image/link below, part of the proceeds go to support Skeptophilia!]