My dad used to say that ignorance was only skin deep, but stupid goes all the way to the bone.
There's a lot to that.  Ignorance can be cured; after all, the etymology of the word comes from a- (not) and -gnosis (knowledge).  There are plenty of things I'm ignorant about, but I try my best to be willing to cure that ignorance by working at understanding.

Stupidity, on the other hand, is a different matter.  There's something willful about stupidity.  There's a stubborn sense of "I don't know and I don't care," leading to my dad's wise assessment that on some level stupidity is a choice.  Stupidity is not simply ignorance; it's ignorance plus the decision that ignorance is good enough.

What my dad may have not realized, though, is that there's a third circle of hell, one step down even from stupidity.  Science historian Robert Proctor of Stanford University has made this his area of study, a field he has christened agnotology -- the "study of culturally-constructed ignorance."

Proctor is interested in something that makes stupidity look positively innocent; the deliberate cultivation of stupidity by people who are actually intelligent.  This happens when special interest groups foster confusion among laypeople for their own malign purposes, and see to it that such misinformation goes viral.  For example, this is clearly what has been going on for years with respect to anthropogenic climate change.  There are plenty of people in the petroleum industry who are smart enough to read and understand scientific papers, who can evaluate data and evidence, who can follow a rational argument.  That they do so, and still claim to be unconvinced, is stupidity.

That they then lie and misrepresent the science in order to cast doubt in the minds of less well-informed people in order to push a corporate agenda is one step worse.

"People always assume that if someone doesn't know something, it's because they haven't paid attention or haven't yet figured it out," Proctor says.  "But ignorance also comes from people literally suppressing truth—or drowning it out—or trying to make it so confusing that people stop caring about what's true and what's not."
Anyone else immediately think of Fox News and OAN?  Deliberately cultivating stupidity is their stock in trade. 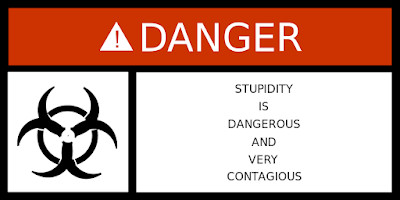 [Image is licensed under the Creative Commons Betacommand at en.wikipedia, Stupidity is contagious, CC BY 3.0]
The same sort of thing accounts for the claim that COVID was deliberately created by China as a biological weapon, that the illness and death rates are being manipulated to make Donald Trump look bad, and that masks are completely ineffective.  It's behind claims that there was widespread anti-Trump voter fraud in the last election, that every single mass shooting in the United States is an anti-Second-Amendment "false flag," and just about every claim ever made by Sean Hannity.  Proctor says the phenomenon is even responsible for the spread of creationism -- although I would argue that this isn't quite the same thing.  Most of the people pushing creationism are, I think, true believers, not cynical hucksters who know perfectly well that what they're saying isn't true and are only spreading the message to bamboozle the masses.  (Although I have to admit that the "why are there still monkeys?" and "the Big Bang means that nothing exploded and made everything" arguments are beginning to seem themselves like they're one step lower than stupidity, given how many times these objections have been answered.)

"Ignorance is not just the not-yet-known, it’s also a political ploy, a deliberate creation by powerful agents who want you 'not to know'," Proctor says.  "We live in a world of radical ignorance, and the marvel is that any kind of truth cuts through the noise.  Even though knowledge is accessible, it does not mean it is accessed."

David Dunning of Cornell University, who gave his name to the Dunning-Kruger effect (the idea that people systematically overestimate their own knowledge), agrees with Proctor.  "While some smart people will profit from all the information now just a click away, many will be misled into a false sense of expertise," Dunning says.  "My worry is not that we are losing the ability to make up our own minds, but that it’s becoming too easy to do so.  We should consult with others much more than we imagine.  Other people may be imperfect as well, but often their opinions go a long way toward correcting our own imperfections, as our own imperfect expertise helps to correct their errors."

All of which, it must be said, is fairly depressing.  That we can have more information at our fingertips than ever before in history, and still be making the same damned misjudgments, is a dismal conclusion.  It is worse still that there are people who are taking advantage of this willful ignorance to push popular opinion around for their own gain.

So my dad was right; ignorance is curable, stupidity reaches the bone.  And the deliberate cultivation of stupidity studied by Proctor and Dunning, I think, goes past the bone, all the way to the heart.
*********************************
Science writer Elizabeth Kolbert established her reputation as a cutting-edge observer of the human global impact in her wonderful book The Sixth Extinction (which was a Skeptophilia Book of the Week a while back).  This week's book recommendation is her latest, which looks forward to where humanity might be going.
Under a White Sky: The Nature of the Future is an analysis of what Kolbert calls "our ten-thousand-year-long exercise in defying nature," something that immediately made me think of another book I've recommended -- the amazing The Control of Nature by John McPhee, the message of which was generally "when humans pit themselves against nature, nature always wins."  Kolbert takes a more nuanced view, and considers some of the efforts scientists are making to reverse the damage we've done, from conservation of severely endangered species to dealing with anthropogenic climate change.
It's a book that's always engaging and occasionally alarming, but overall, deeply optimistic about humanity's potential for making good choices.  Whether we turn that potential into reality is largely a function of educating ourselves regarding the precarious position into which we've placed ourselves -- and Kolbert's latest book is an excellent place to start.
[Note: if you purchase this book using the image/link below, part of the proceeds goes to support Skeptophilia!]