When I was about fourteen, I read Richard Adams's novel Watership Down.

I had never experienced being completely swallowed up by a book the way this one did.  I couldn't put it down -- read, literally, all day long, including over breakfast and lunch.  (Couldn't get away with reading during dinner.  That was verboten in my family.)  It didn't bother me that it's a story about rabbits; in Adams's hands they are deeply real, compelling characters, while never losing their core rabbit-ness.  Their adventure is one of the most gripping, exciting stories I've ever read, and it's still in my top ten favorite books ever.

One of the primary reasons for this is the main character, Hazel.  Hazel is a true leader, bringing his intrepid band through one danger after another to get to a new and safe home, and he accomplishes this without being some kind of high-flung hero.  He's determined, smart, and loyal, but other than that quite ordinary; his main skill is in using all the talents of his friends to their utmost, leading through cooperation and respect rather than through fear.  (And if that point wasn't clear enough, when you meet his opposite, the terrifying General Woundwort, the contrast is obvious -- as is why Hazel and his friends ultimately win the day.) 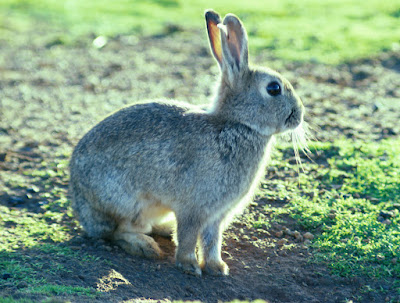 We love Hazel because we can be him, you know?  He's not an archetypical warrior whose feats are beyond the ability of just about all of us.  I loved (and still love) a lot of sword-and-sorcery fantasy, but it's never the Lords and Ladies of the Elves, the ones always featured on the book covers, whom I identify with.  It's the Samwise Gamgees that capture my heart every time.  Maybe King Aragorn is the hero of Lord of the Rings, but even he told Sam, "You kneel before no one."

In a passage that is kind of a meta-representation of my own absorption in the story, about a third of the way through Watership Down, Hazel and his friends meet two other rabbits from their home warren, and find out that those two are the only other survivors left after the warren was destroyed by humans so the property could be developed for residences.  Adams's description of the characters listening to the horrific account of their escape -- and of their friends who were not so lucky -- parallels what we feel reading the larger story:

Hazel and his companions had suffered extremes of grief and horror during the telling of Holly's tale.  Pipkin had cried and trembled piteously at the death of Scabious, and Acorn and Speedwell had been seized with convulsive choking as Bluebell told of the poisonous gas that murdered underground...  [But] the very strength and vividness of their sympathy brought with it a true release.  Their feelings were not false or assumed.  While the story was being told, they heard it without any of the reserve or detachment that the kindest of civilized humans retains as he reads the newspaper.  To themselves, they seemed to struggle in the poisoned runs...  This was their way of honoring the dead.  The story over, the demands of their own hard, rough lives began to reassert themselves in their hearts, in their nerves, their blood and appetites.

The reason I thought of Watership Down, and this passage in particular, is because of a paper I read in the journal Social, Cognitive, and Affective Neuroscience a couple of days ago.  In "Becoming the King in the North: Identification with Fictional Characters is Associated with Greater Self/Other Neural Overlap," by Timothy Broom and Dylan Wagner (Ohio State University) and Robert Chavez (University of Oregon), participants were asked to evaluate how closely they identified with fictional characters -- in this case, from Game of Thrones -- and then the researchers looked at the volunteers' brain activity in the ventral medial prefrontal cortex (vMPFC), an area associated with our perception of self, when thinking about the various characters in the story.

When thinking about the characters the test subjects liked best, there was much stronger activity in the vMPFC, suggesting that the participants weren't only experiencing enjoyment or appreciation, they were -- like Hazel's friends -- becoming the character.  The authors write, "These results suggest that identification with fictional characters leads people to incorporate these characters into their self-concept: the greater the immersion into experiences of ‘becoming’ characters, the more accessing knowledge about characters resembles accessing knowledge about the self."

"For some people, fiction is a chance to take on new identities, to see worlds though others’ eyes and return from those experiences changed," study co-author Dylan Wagner said, in a press release from Ohio State University.  "What previous studies have found is that when people experience stories as if they were one of the characters, a connection is made with that character, and the character becomes intwined with the self.  In our study, we see evidence of that in their brains."

"People who are high in trait identification not only get absorbed into a story, they also are really absorbed into a particular character," co-author Timothy Broom explained.  "They report matching the thoughts of the character, they are thinking what the character is thinking, they are feeling what the character is feeling.  They are inhabiting the role of that character."
So there's a neurological underpinning to our absorption into a truly fine story -- or, more specifically, a character we care about deeply.  It's what I hope for when people read my own books; that they will not just appreciate the plot but form an emotional connection to the characters.  My contention is that however plot-driven a genre is, all stories are character stories.  The plot and scene-setting can be brilliant, but if we don't care about the characters, none of that matters.
It's fascinating that we can be so transported by fiction, and suggests that we've been storytellers for a very long time.  When reading or hearing a profoundly moving story, we are able to drop the veneer of what Adams describes as our "reserve and detachment... [while reading] the newspaper."  We get swallowed up, and our brain activity reflects the fact that on some level, we're actually there experiencing what the character experiences.
Even if that character is "just a rabbit."
***************************************
I've always been in awe of cryptographers.  I love puzzles, but code decipherment has seemed to me to be a little like magic.  I've read about such feats as the breaking of the "Enigma" code during World War II by a team led by British computer scientist Alan Turing, and the stunning decipherment of Linear B -- a writing system for which (at first) we knew neither the sound-to-symbol correspondence nor even the language it represented -- by Alice Kober and Michael Ventris.
My reaction each time has been, "I am not nearly smart enough to figure something like this out."
Possibly because it's so unfathomable to me, I've been fascinated with tales of codebreaking ever since I can remember.  This is why I was thrilled to read Simon Singh's The Code Book: The Science of Secrecy from Ancient Egypt to Quantum Cryptography, which describes some of the most amazing examples of people's attempts to design codes that were uncrackable -- and the ones who were able to crack them.
If you're at all interested in the science of covert communications, or just like to read about fascinating achievements by incredibly talented people, you definitely need to read The Code Book.  Even after I finished it, I still know I'm not smart enough to decipher complex codes, but it sure is fun to read about how others have accomplished it.
[Note: if you purchase this book using the image/link below, part of the proceeds goes to support Skeptophilia!]