By now, most of you have probably heard that Marjorie Taylor Greene, the Republican representative from Georgia who narrowly edged out both Matt Gaetz and Lauren Boebert as the biggest asshole in Congress, thought it'd be a fun stunt to taunt Representative Marie Newman (D-Ill.) about having a transgender daughter by putting up the following sign: 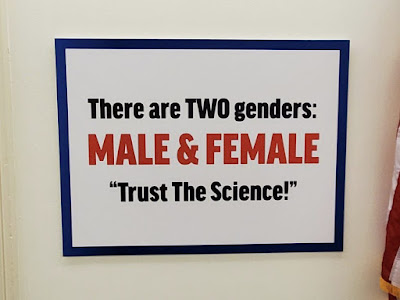 This sign illustrates a general rule of thumb, to wit: do not append "Trust the Science" to your ignorant, bigoted opinion and expect it to go unchallenged when there's someone in the room who actually understands science.

The whole "anything that's not cis-het-binary sexuality is unnatural" claim starts to fall apart as soon as you look at it carefully.  Beginning with the fact that to date, homosexual behavior has been observed and documented in 450 animal species besides humans.  That's a few too many to explain away, as one Kenyan official did regarding a video of coupling between two male lions, that the animals were "influenced by gays who have gone to the national parks and behaved badly."

Although I have to say that any couple, gay or otherwise, who is brave enough to fuck outdoors while lions are watching has my utmost admiration.

Since "unnatural" means "not found in nature," we're off to a bad start.  Things only get worse when you look not at who's mating with whom, but what the sexes of individuals themselves are.  Over five hundred species of fish have been identified that change sex -- often when a dominant individual of one sex dies, and the strongest remaining individual switches sex to take his/her place.  Some species, such as many types of gobies, can actually change back and forth, actually altering their anatomy to become reproductively mature females or males as needed dependent on the makeup of the rest of the population.

The complications don't end there, because there's the difficulty of specifying what exactly we mean when we say "male" and "female."  There are at least five different ways that you could define "sex:" what genitals you have, which gender(s) you're attracted to, what sex chromosomes you have, the hormones present in your bloodstream, and your brain wiring (i.e., what gender you see yourself as).  And despite what Marjorie Taylor Greene and others of her ilk would have you believe, all too commonly these don't line up.

We dealt with attraction and genitalia; what about chromosomes?  In mammals, maleness is conferred by a gene complex called SRY that's present on the Y chromosome, so generally if an individual has a matched set of sex chromosomes (XX), she's female, while someone with an unmatched set (XY) is male.  It's wryly amusing that the euphemism for explaining sex is "the birds and the bees," because birds and bees both do this a different way; in birds, it's the males that have the matched set (ZZ) while the females have the unmatched set (ZW), which is why sex-linked trait inheritance has the opposite pattern in birds than it does in mammals.  Bees are haplo-diploid, meaning that males have half the number of chromosomes that females do -- fertilized eggs give rise to females, and unfertilized ones to males.  (If you're thinking, "so that means male bees have a mother but no father?", you're exactly right.)

Okay, so let's limit it to humans.  Makes it simple, right?  If that's your guess, you've kind of lost the plot.  Humans follow the XX/XY pattern -- most of the time.  In embryonic development, female anatomy is sort of the default condition; if an embryo lacks a working SRY, it develops into a female.  One of the drivers of the development of male anatomy is a gene in the SRY complex called 5-alpha-reductase, of which males generally have two copies.  One activates embryonically, which is why a prenatal ultrasound can often tell a woman if she's going to have a boy or not; the other activates around age twelve or thirteen and generates the changes in a boy's body that happen at puberty.

But there's a mutation called 5-alpha-reductase deficiency, which knocks out the first copy but not the second.  So the baby is born looking like an ordinary female infant.  Then at age twelve, the second gene switches on, and in a few months, the child turns into a male -- the gonads descend, the penis develops, and so on.

Then there are the kids who have X-SRY -- the SRY complex moved during a process called crossing over onto the X chromosome, so the child karyotypes as a female but is anatomically male.  Then there's XY androgen insensitivity, which is sort of the opposite; an alteration in a hormone receptor causes the male hormones to be unable to lock onto the appropriate cells, so even though they have an XY karyotype and the amount of testosterone in the bloodstream usually seen in a normal male, they're anatomically female.

And then there's the most complex thing of all, which is the neural wiring that gives rise to the sense of self.  Most adults have a sense of their gender that goes beyond what their plumbing looks like.  Sometimes that doesn't line up with the genitalia, the chromosome makeup, or both.  A 2019 paper in Nature exhibits beyond any doubt that transgender people are not, as Marjorie Taylor Greene would claim, either "unnatural" or "making it up," they actually have differences in their neurology and hormone/receptor interactions from those that cisgender people do.  We still don't fully understand what causes the transgender condition, but one thing it definitely isn't is some kind of invented pseudo-condition.

Nor is any of this a choice.  I'm reminded of what a trans student of mine said a couple of years ago: "A choice?  Why would I choose this?  To face prejudice on a daily basis?  To have to fight continuously for people simply to acknowledge that I am who I say I am?  Give me a break."  Then there was the gay student who shut up the "it's a choice" bigots by saying that if homosexual attraction is a choice, straight people should be able to choose, at least temporarily, to be attracted to the same sex.  "Try it!" he'd tell them cheerfully.  "Look at the body of someone the same sex as you, and choose to be attracted!"

After the bigot is stunned into silence, he usually adds, "Until you can do that, shut the fuck up."

Unfortunately, a lot of non-cis-hetero-binary people aren't in the position where they can be that determined not to give an inch; they still face ostracism from family and friends, ridicule and violence, and in some countries, imprisonment, torture, or execution.  Just for being who they are, just for loving who they love, just for wanting to have society acknowledge that sexuality and gender are complex -- and therefore as long as it's between consenting adults, every person has the right to be open about expressing those things in whatever way they experience them.

But with so many people being bound and determined to fit the whole world into a neat, tidy, binary box, is it any wonder why LGBTQ+ people want to find a descriptor for every possible combination and gradation?  I sometimes hear snickering over "adding another letter to the acronym;" but society has been so dismissive for so long that it's no wonder people want to find a label to hold up and say "This is who I am."  (If you're wondering, I'm male and bisexual, but "queer" is also fine with me.)  Sexuality, both in humans and in other species, is so complex and multifaceted that there may not be letters in the alphabet to slice it finely enough to find a unique descriptor for each person's experience of it.  But with clods like Marjorie Taylor Greene posting signs on office doors saying that they have the God-given black-and-white truth and all the scientists agree, you can hardly fault them for trying.

So to wrap this up: not only is Greene's sign simple bigotry, it's outright false.  The universe is a complicated place, and either you should take the time to learn what science actually has uncovered about it, or else keep your damn mouth shut.

And if you're too lazy, ignorant, and opinionated to do that, you have no place in our government crafting policy for people smarter than you.