Yesterday a loyal reader of Skeptophilia sent me a link with the note, "Now I've heard everything."

The link was to the home page of a company called VitaJuwel.  The sales pitch is headed with the line, "Create Your Own Fresh and Pure Gemstone Water!"

Evidently the idea here is that we're going one step beyond "crystal healing;" now what you do is take crystals and put them in your water, and it somehow makes the water...

... well, I dunno.  Waterier or something.  They're never completely clear on that point. 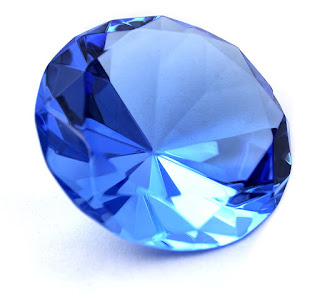 [Image licensed under the Creative Commons Sapphiredge, Sapphire Gem, CC BY-SA 3.0]
What's funniest about this is that the gems they sell you are encased in glass vials, so they don't even come into physical content with the water.  You just immerse the vial with the gems into the water, and somehow the jewel-ness of the gems seeps right through the glass and into the water.  Oh, but all of this is highly scientific:

Seven years ago, we revolutionized the way to prepare vital and fresh water at home.  Following age-old traditions, we created gemstone vials to hygienically inspirit drinking water.  Our vision now and then is to provide you with homemade, natural gemwater like fresh from the spring!

VitaJuwel gem vials are made from lead-free glass and hand-picked gems.  We offer several different gem blends, tested by naturopaths and based on the insights of modern crystal healing.  Their scientifically proven efficiency make them an essential accessory in health-seeking households worldwide.

So naturally I wanted to find out what this "scientifically proven efficiency" was based on, so I went to their "methods" page, and I'm happy to say it did not disappoint:

The use of gems to vitalize water is a traditional art which was already known to the ancient Greek and wise men and women during medieval times.  Recently, this old tradition has been rediscovered.  Gemstones have the ability to store energy.  That effect makes quartz watches work, for example.

What they're referring to here is the piezoelectric effect, which is the property of certain crystalline substances to alter in their electric charge in response to mechanical stress.  This property is used in dozens of applications -- in everything from guitar pickups to inkjet printers to electric lighters.  In quartz clocks, a disk of quartz is used to generate an oscillating change in electrical voltage that then can regulate the ticking of the second hand.
Which has fuck-all to do with immersing jewels in water and then drinking it.
And of course, the gemstone water people aren't talking about anything nearly that concrete and demonstrable in any case.  Here's how they say it works:

Each type of gem, by nature, has its unique kind of energetic information.  The gems inside the VitaJuwel vials transfer their information to the water that surrounds the vial and, thus, improve the waters' vitalization level.  An effect which regular water drinkers might even be able to taste!

What exact "information" they're talking about is unclear, as is the means by which a gem could transfer this information into water through the sides of a glass bottle.  The skeptics, though, they dismiss with the following inadvertently hilarious statement: "Infusing water with the power of gems is an age-old tradition and – comparable to homeopathy – hard to grasp by conventional 'scientific' means."
Yup. In fact, gemstone water works precisely in the same way that homeopathy does.
Oh, and by the way: they say it also works for a glass of wine.  Which, after reading the shtick on this website, I feel like I could use one or two of.
Did you notice that in the last quote, they put the word scientific in quotation marks?  I have to admit that it torques me a little, because the implication is that a claim being supported by "conventional scientific means" is a bad thing.  Oh, those silly scientists -- always demanding proof and evidence and so on.  Never just accepting an "age old tradition" about "unique energetic information" without expecting it to generate results that stand up to analysis -- and that have some kind of understandable mechanism by which they could work.
And that's not even looking at the fact that these "VitaJuwel" vials, as far as I could see from their website, start at $78.  That's just for the economy model, if you want cheap, tabloid-magazine-level information being imparted to your water.  For the truly Shakespeare-quality information, you have to go for the ViA Crystal Edition Golden Moments vial, for a cool $340.
My advice: keep your money.  Putting a glass bottle with some shiny rocks into your drinking water (or wine) is going to generate nothing more than a lighter pocketbook and the placebo effect.  As far as the rest of the pseudoscientific blather on the site -- I'm calling bullshit.
***************************************
I've always been in awe of cryptographers.  I love puzzles, but code decipherment has seemed to me to be a little like magic.  I've read about such feats as the breaking of the "Enigma" code during World War II by a team led by British computer scientist Alan Turing, and the stunning decipherment of Linear B -- a writing system for which (at first) we knew neither the sound-to-symbol correspondence nor even the language it represented -- by Alice Kober and Michael Ventris.
My reaction each time has been, "I am not nearly smart enough to figure something like this out."
Possibly because it's so unfathomable to me, I've been fascinated with tales of codebreaking ever since I can remember.  This is why I was thrilled to read Simon Singh's The Code Book: The Science of Secrecy from Ancient Egypt to Quantum Cryptography, which describes some of the most amazing examples of people's attempts to design codes that were uncrackable -- and the ones who were able to crack them.
If you're at all interested in the science of covert communications, or just like to read about fascinating achievements by incredibly talented people, you definitely need to read The Code Book.  Even after I finished it, I still know I'm not smart enough to decipher complex codes, but it sure is fun to read about how others have accomplished it.
[Note: if you purchase this book using the image/link below, part of the proceeds goes to support Skeptophilia!]