About two weeks ago, I wrote a piece here about a Scottish cryptid called the Am Fear Liath Mòr -- which roughly translates from Gaelic as "the big gray dude" -- a horrifying apparition that has been seen in the Cairngorms of northern Scotland.  It's described as a human figure, but huge and hulking, that appears in the distance, understandably creating "uneasy feelings" in the observer.

As I mentioned in my previous post, if I were to see such a thing, my "uneasy feelings" would include being so terrified I'd drop dead of a brain aneurysm.  Because I'm just that brave.

Well, thanks to a friend and long-time loyal reader of Skeptophilia, I've learned that this might be an unfortunate overreaction on my part.  The Am Fear Liath Mòr may have a completely rational, scientific explanation, and one that doesn't require belief in some enormous Sasquatch knock-off wandering around in the Highlands.  It seems like the Scottish Big Gray Dude might be an example of a phenomenon that occurs in foggy mountains called the "Brocken spectre."

The Brocken spectre (or "Brocken bow") is an optical effect that occurs when there are eye-level uniformly-dispersed water droplets of all about the same size -- as you find in a fog bank -- and you're backlit by sunlight.  This requires specific conditions, not only fog in front of you, but it being clear enough behind you that there's sufficient sunlight to cast a shadow.  The result is that your shadow, or more accurately the light rays that outline it, are refracted and reflected by the water droplets in the fog, creating a hugely magnified shadow surrounded by a halo of glare, sometimes with a rainbow sheen. 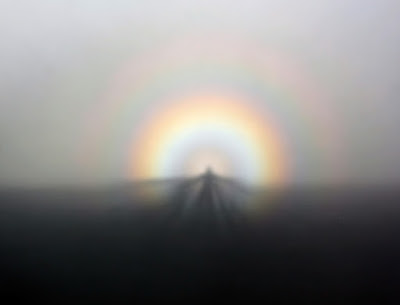 A Brocken spectre photographed near the Golden Gate Bridge, San Francisco, California [Image licensed under the Creative Commons Brocken Inaglory, Solar glory and Spectre of the Brocken from GGB on 07-05-2011, CC BY-SA 3.0]

The phenomenon gets its name from the Brocken, a peak in the Harz Mountains of Germany, where it has been observed for centuries, and was described in detail by scientist Johann Silberschlag in 1780.  The idea of the allegedly-supernatural Brocken spectre being nothing more than an optical illusion generated by a shadow and the refractive effects of water droplets is supported by the fact that it's always seen in the fog when the Sun is behind you, and it seems to shift size unpredictably -- unsurprising if you're moving (which I sure as hell would be if I saw one), and there's a breeze making the fog bank waver and shift.

So it turns out that the Big Gray Dude of Scotland may not be a cryptid at all, just a weird -- and fascinating -- localized weather phenomenon.  And it also accounts for other instances of eerie figures in the mist, such as the "Dark Watchers" of the Santa Lucia Mountains in California and the strange looming presence reported by British mountaineer Eric Shipton while climbing Mount Kenya.  It's also related to the optical phenomenon called heiligenschein ("holy light") which probably accounts for instances of people being seen surrounded by what appears to be a ghostly halo.  The somewhat anticlimactic explanation for this latter effect is that it's not Tongues of Fire or the Radiance of God descending upon you, it's light scattering and a thoroughly understood mechanism called retroreflection that happens regardless of the holiness level of the person involved.

In any case, one more win for the scientific approach, even if it kind of blows away the mystique of a giant scary shadow-man wandering about in the Scottish Highlands.  Skeptic though I am, I have to admit to being a little disappointed.  It seems like if there's anywhere that should actually be haunted, it's the Cairngorms.  But even so, it's somehow fitting that the thing that has been terrifying the superstitious for centuries turns out to be nothing more than...