Last September I took a job working half-time, providing companion care for a senior gentleman who lives in a full-care facility about twenty minutes' drive from where I live.  The work was easy -- mostly what he wanted to do was go for long walks -- and it helped replace a little bit of the income I lost when I retired from teaching.  It also got me out of the house, and (in my wife's words) kept me from turning into a complete recluse.

Then in November, I was furloughed because of the pandemic.

I was in the fortunate position that the financial hit of not working wasn't the dire situation it is for many.  The loss of my weekly paycheck didn't mean we would go without food or miss our mortgage payment.  What it did mean -- both for my client and me -- was that since then, we've been pretty well totally isolated.  My client still sees the nursing staff at the facility; and, to be clear about this, they are stupendous, doing their best to see not only to the physical but to the mental and emotional health of their residents.  For me, it's meant that other than occasional quick trips to the grocery store, the only person I see is my wife.

That's been the situation since the first week of November.

I honestly thought it would be easier for me to deal with isolation.  I'm an introvert by nature, and pretty shy and socially awkward at the best of times.  But the last few months have been dismal, with the fact of it being the middle of an upstate New York winter not helping matters.  I've been fighting bouts of depression and anxiety -- something I've dealt with all my life, but lately it's seemed a lot worse than my usual baseline.

A couple of weeks ago, I was contacted by the director of the facility.  Because I've been vaccinated against COVID, and the residents were also receiving their vaccines, they were reopening to non-essential visits, and my client was eager to resume our daily time together.  Yesterday was my first day back at work after being stuck at home, pretty much continuously, for four months.

This is where things get weird.  Because instead of it relieving my anxiety, it made it spike higher.  I'm talking, to nearly panic-attack levels.

In case this isn't clear enough, there is nothing rational about this reaction.  My client has some developmental disabilities, and frequently needs a lot of help and encouragement, but he's kind, funny, and a pleasure to be with.  The job itself is the opposite of stressful; the worst part of it is having to keep track of the paperwork required by the agency and the state.  Being stuck home made my anxiety worse; if anything made sense about this, you'd think being given the green light to work again would assuage it. 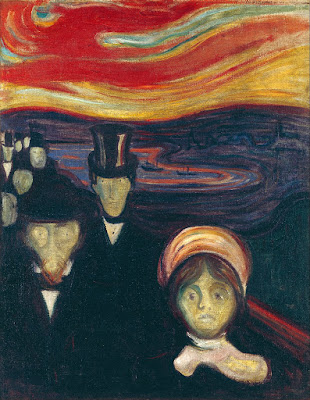 Edvard Munch, Anxiety (1894) [Image is in the Public Domain]

Apparently, though, I'm not alone in this rather counterintuitive reaction.  A paper last week in the journal Brain Sciences found that the social isolation a lot of us have experienced over the past year has caused a measurable spike in the levels of a hormone associated with stress called cortisol.  Cortisol is a multi-purpose chemical; it has a role in carbohydrate metabolism, behavior, resilience to emotional stressors, and reducing inflammation (cortisone, used for treating arthritis and joint injury, and topically for relieving skin irritations, is basically synthetic cortisol).  This last function is thought to be why long-term stress has a role in many inflammatory diseases, such as ulcers, acid reflux, and atherosclerosis; just as overconsumption of sugar can lead to the body losing its sensitivity to the hormone that regulates blood sugar (insulin), continuous stress seems to lower our sensitivity to cortisol, leading to increased inflammation.

Apropos of its role in emotional stress, the authors write:

There are important individual differences in adaptation and reactivity to stressful challenges.  Being subjected to strict social confinement is a distressful psychological experience leading to reduced emotional well-being, but it is not known how it can affect the cognitive and empathic tendencies of different individuals.  Cortisol, a key glucocorticoid in humans, is a strong modulator of brain function, behavior, and cognition, and the diurnal cortisol rhythm has been postulated to interact with environmental stressors to predict stress adaptation.  The present study investigates in 45 young adults (21.09 years old, SD = 6.42) whether pre-pandemic diurnal cortisol indices, overall diurnal cortisol secretion (AUCg) and cortisol awakening response (CAR) can predict individuals’ differential susceptibility to the impact of strict social confinement during the Coronavirus Disease 2019 (COVID-19) pandemic on working memory, empathy, and perceived stress.  We observed that, following long-term home confinement, there was an increase in subjects’ perceived stress and cognitive empathy scores, as well as an improvement in visuospatial working memory.  Moreover, during confinement, resilient coping moderated the relationship between perceived stress scores and pre-pandemic AUCg and CAR.

I thought it was pretty interesting that heightened cortisol has the effect of improving visuospatial working memory, but it makes sense if you think about it.  When a person is in a stressful situation, there's a benefit to being on guard, to keeping constant tabs on what's around you.  The downside, of course, is that such perpetual wariness is downright exhausting.

The last bit is also fascinating, if hardly surprising.  People who were capable of resilient coping with stress beforehand were less affected by the new emotional impact of being isolated; people like myself who were already struggling fared more poorly.  And interestingly, this was a pronounced enough response that it had a measurable effect on the levels of stress hormones in the blood.

This may explain my odd reaction to being taken off furlough.  Cortisol can be thought of as a sort of an "adrenaline for the long haul."  Adrenaline allows a fight-or-flight reaction in sudden emergencies, and has a rapid effect and equally rapid decline once the emergency is over.  Cortisol handles our response to long-duration stress -- and its effects are much slower to go away once the situation improves.  For people like myself who suffer from anxiety, it's like our brains still can't quite believe that we're no longer teetering over the edge of the cliff.  Even though things have improved, we still feel like we're one step from total ruin, and the added stressor of jumping back into a work situation when we've been safe at home for months certainly doesn't help.

In any case, yesterday's work day went fine.  As they always do.  I'm hoping that after a couple of weeks, my errant brain will finally begin to calm down once it realizes it doesn't have to keep me ramped up to red alert constantly.  It helps knowing I'm not alone in this reaction, and that there's a biochemical basis for it; that I'm not just making this up (something I was accused of pretty much every time I had an anxiety attack when I was a kid).

But it would also be nice if my brain would just think for a change.

***************************************
I've always been in awe of cryptographers.  I love puzzles, but code decipherment has seemed to me to be a little like magic.  I've read about such feats as the breaking of the "Enigma" code during World War II by a team led by British computer scientist Alan Turing, and the stunning decipherment of Linear B -- a writing system for which (at first) we knew neither the sound-to-symbol correspondence nor even the language it represented -- by Alice Kober and Michael Ventris.
My reaction each time has been, "I am not nearly smart enough to figure something like this out."
Possibly because it's so unfathomable to me, I've been fascinated with tales of codebreaking ever since I can remember.  This is why I was thrilled to read Simon Singh's The Code Book: The Science of Secrecy from Ancient Egypt to Quantum Cryptography, which describes some of the most amazing examples of people's attempts to design codes that were uncrackable -- and the ones who were able to crack them.
If you're at all interested in the science of covert communications, or just like to read about fascinating achievements by incredibly talented people, you definitely need to read The Code Book.  Even after I finished it, I still know I'm not smart enough to decipher complex codes, but it sure is fun to read about how others have accomplished it.
[Note: if you purchase this book using the image/link below, part of the proceeds goes to support Skeptophilia!]