It's been awhile since we've have a truly goofy claim to consider, so to take a brief diversion from more serious issues, today I bring you:

NASA space telescopes have photographed the Celestial City of New Jerusalem, as hath been prophesied in the scriptures.

I wish I was making this up.  The claim appeared on the ultra-fundamentalist site Heaven & Hell, and the post, written by one Samuel M. Wanginjogu, reads like some kind of apocalyptic wet dream.

It opens with a bang.  "Despite new repairs to the Hubble Telescope," Wanginjogu writes, "NASA refuses to release old photos or take new ones of Heaven!"

He goes on to explain further:

Just days after space shuttle astronauts repaired the Hubble Space Telescope in mid December, the giant lens focused on a star cluster at the edge of the universe – and photographed heaven!

That’s the word from author and researcher Marcia Masson, who quoted highly placed NASA insiders as having said that the telescope beamed hundreds of photos back to the command center at Goddard Space Flight Center in Greenbelt, Md., on December 26.

The pictures clearly show a vast white city floating eerily in the blackness of space.

And the expert quoted NASA sources as saying that the city is definitely Heaven “because life as we know it couldn’t possibly exist in icy, airless space.

“This is it – this is the proof we’ve been waiting for,” Dr. Masson told reporters.

“Was that someone or something God himself?  Given the vastness of the universe, and all the places NASA could have targeted for study, that would certainly appear to be the case.”

Then we get to see the photograph in question: 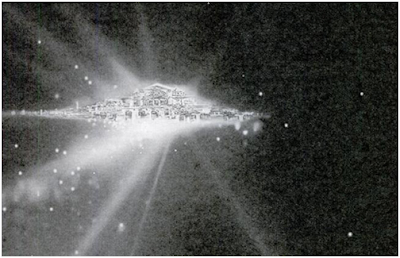 After I stopped guffawing, I read further, and I was heartened to see that Wanginjogu is all about thinking critically regarding such claims:

I am not an expert in photography, but if you scrutinize the photo carefully, you find that the city is surrounded by stars if at all it was taken in space...  If the photo is really a space photo, then it could most likely be the Celestial city of God because it is clear that what is in the photograph is not a star, a planet or any other known heavenly body.

Yes!  Surrounded by stars, and not a planet!  The only other possibility, I think you will agree, is that it is the Celestial City of God.

Wanginjogu then goes through some calculations to estimate the size of New Jerusalem:

If an aero plane [sic] passes overhead at night, you are able to see the light emitted by it.  If that aero plane [sic] was to go higher up from the surface of the earth, eventually you won’t be able to see any light from it and that is only after moving a few kilometers up.  This is because of its small size.  Yet our eyes are able to see, without any aid, stars that are millions of light years away.  This is because of their large size.

The further away an object is from the surface of the earth, then the bigger it needs to be and the more the light it needs to emit for it to be seen from earth.

Some solid astrophysics, right there.  He then goes on to use the Book of Revelation to figure out how big the city prophesied therein must be, and from all of this he deduces that the Celestial City must be somewhere within our Solar System for Hubble to have captured the photograph.  He also uses the testimony of one Seneca Sodi, who apparently saw an angel and asked him how far away heaven was, and the angel said, "Not far."

The best part, though, was when I got about halfway through, and I found out where Wanginjogu got the photograph from.  (Hint: not NASA.)  The photograph, and in fact the entire claim, originated in...

Yes, that hallowed purveyor of stories about Elvis sightings, alien abductions, and Kim Kardashian being pregnant with Bigfoot's baby.  Even Wanginjogu seems to realize he's on shaky ground, here, and writes:

This magazine is known to exaggerate stories and to publish some really controversial articles.  However, it also publishes some true stories.  So we cannot trash this story just because it first appeared in The Weekly World News magazine.  It is worthwhile to consider other aspects of the story.

He's right that you can't rule something out because of the source, but this pretty much amounts to something my dad used to say, to wit, "Even stopped clocks are right twice a day."   But suffice it to say that here at Skeptophilia headquarters we have considered other aspects of the story, and it is our firmly-held opinion that to believe this requires that you have a single scoop of butter-brickle ice cream where the rest of us have a brain.

Anyway, there you are.  NASA photographing heaven.  Me, I'm waiting for them to turn the Hubble the other direction, and photograph hell.  Since that's where I'm headed anyway, might as well take a look at the real estate ahead of time.