A man is discussing his fears about dying with his parish priest.

"Father," he says, "I'd be able to relax a little if I knew more about what heaven's like.  I mean, I love baseball... do you think there's baseball in heaven?"

The priest says, "Let me pray on the matter, my son."

So at their next meeting, the priest says, "I have good news and bad news...  The good news is, there is baseball in heaven."

The man gave him a relieved smile.  "So, what's the bad news?"

"You're playing shortstop on Friday."

The vast majority of us aren't in any particular rush to die, and would go to significant lengths to postpone the event.  Even people who believe in a pleasant afterlife -- with or without baseball -- are usually just fine waiting as long as possible to get there.

And beyond our own fears about dying, there's the pain of grief and loss to our loved ones.  The idea that we're well and truly gone -- either off in some version of heaven, or else gone completely -- is understandably devastating to the people who care about us.

Well, with a machine-learning chatbot-based piece of software from Microsoft, maybe gone isn't forever, after all. 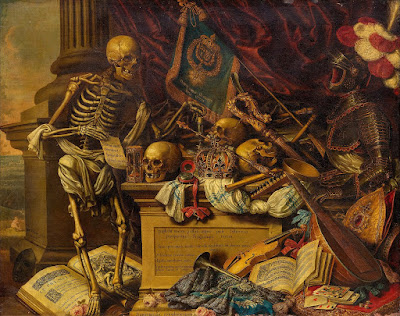 What this piece of software does is to go through your emails, text messages, and social media posts, and pulls out what you might call "elements of style" -- typical word choice, sentence structure, use of figurative language, use of humor, and so on.  Once sufficient data is given to it, it can then "converse" with your friends and family in a way that is damn near indistinguishable from the real you, which in my case would probably involve being unapologetically nerdy, having a seriously warped sense of humor, and saying "fuck" a lot.

If you find this idea kind of repellent, you're not alone.  Once I'm gone, I really don't want anyone digitally reincarnating me; because, after all, it isn't me you'd be talking to.  The conscious part of me isn't there, it's just a convincing mimic, taking input from what you say, cranking through an algorithm, and producing an appropriate output based on the patterns of speech it learned.

This brings up the time-honored question of what consciousness actually is, something that has been debated endlessly by far wiser heads than mine.  In what way are our brains not doing the same thing?  When you say, "Hi, Gordon, how's it going?", aren't my neural firing patterns zinging about in a purely mechanistic fashion until I come up with, "Just fine, how are you?"  Even a lot of us who don't explicitly believe in a "soul" or a "spirit," something that has an independent existence outside of our physical bodies, get a little twitchy about our own conscious experience.

So if an AI could mimic my responses perfectly -- and admittedly, the Microsoft chatbot is still fairly rudimentary -- how is that AI not me?

*brief pause to give my teddy bear a hug*

Myself, I wouldn't find a chatbot version of my deceased loved one at all comforting, however convincing it sounded.  Apparently there's even been some work on having the software scan through your photographs, and creating an animated avatar to go along with your verbal responses, and I find that even worse.  As hard as it is to lose someone you care about, it seems to me better to accept that death is part of the human condition, to grieve and honor your loved one in whatever way seems appropriate, and then get on with your own lives.

So please: once I'm gone, leave me to Rest In Peace.  No digital resuscitation, thanks.  To me, the Vikings had the right idea.  When I die, put my body on a boat, set fire to it, and push it out into the ocean.  Then afterward, have a wild party on the beach in my honor, with plenty of wine, music, dancing, and drunken debauchery.  This is probably illegal, but I can't think of a better sendoff.

After that, just remember me fondly, read what I wrote, recall all the good times, and get on with living.  Maybe there's an afterlife and maybe there isn't, but there's one thing just about all of us would agree on: the life we have right now is too precious to waste.

****************************************
Last week's Skeptophilia book-of-the-week was about the ethical issues raised by gene modification; this week's is about the person who made CRISPR technology possible -- Nobel laureate Jennifer Doudna.
In The Code Breaker: Jennifer Doudna, Gene Editing, and the Future of the Human Race, author Walter Isaacson describes the discovery of how the bacterial enzyme complex called CRISPR-Cas9 can be used to edit genes of other species with pinpoint precision.  Doudna herself has been fascinated with scientific inquiry in general, and genetics in particular, since her father gave her a copy of The Double Helix and she was caught up in what Richard Feynman called "the joy of finding things out."  The story of how she and fellow laureate Emmanuelle Charpentier developed the technique that promises to revolutionize our ability to treat genetic disorders is a fascinating exploration of the drive to understand -- and a cautionary note about the responsibility of scientists to do their utmost to make certain their research is used ethically and responsibly.
If you like biographies, are interested in genetics, or both, check out The Code Breaker, and find out how far we've come into the science-fiction world of curing genetic disease, altering DNA, and creating "designer children," and keep in mind that whatever happens, this is only the beginning.
[Note: if you purchase this book using the image/link below, part of the proceeds goes to support Skeptophilia!]