Every once in a while a piece of scientific research comes along that is so clever and elegant that I read the entire paper with a smile on my face.

This happened today when I bumped into the study by David Robert Grimes (of the University of Oxford) published in PLoS ONE entitled, "On the Viability of Conspiratorial Beliefs."  What Grimes did, in essence, was to come up with an equation that models the likelihood of a conspiracy staying secret.  And what he found was that most conspiracies tend to reveal themselves in short order from sheer bungling and ineptitude.  In Grimes's words:

The model is also used to estimate the likelihood of claims from some commonly-held conspiratorial beliefs; these are namely that the moon-landings were faked, climate-change is a hoax, vaccination is dangerous and that a cure for cancer is being suppressed by vested interests. Simulations of these claims predict that intrinsic failure would be imminent even with the most generous estimates for the secret-keeping ability of active participants—the results of this model suggest that large conspiracies (≥1000 agents) quickly become untenable and prone to failure.

Grimes wasn't just engaging in idle speculation.  He took various examples of conspiracies that did last for a while (for example, the NSA Prism Project that was exposed by Edward Snowden) and others that imploded almost immediately (for example, the Watergate coverup) and derived a formula that expressed the likelihood of failure as a function of the number of participants and the time the conspiracy has been in action.  When considering claims of large-scale coverups -- e.g., chemtrails, the faking of the Moon landing, the idea that climatologists are participating in a climate change hoax -- he found the following:

The analysis here predicts that even with parameter estimates favourable to conspiratorial leanings that the conspiracies analysed tend rapidly towards collapse.  Even if there was a concerted effort, the sheer number of people required for the sheer scale of hypothetical scientific deceptions would inextricably undermine these nascent conspiracies.  For a conspiracy of even only a few thousand actors, intrinsic failure would arise within decades.  For hundreds of thousands, such failure would be assured within less than half a decade.  It’s also important to note that this analysis deals solely with intrinsic failure, or the odds of a conspiracy being exposed intentionally or accidentally by actors involved—extrinsic analysis by non-participants would also increase the odds of detection, rendering such Byzantine cover-ups far more likely to fail.

Which is something I've suspected for years.  Whenever someone comes up with a loopy claim of a major conspiracy -- such as the bizarre one I saw a couple of weeks ago that the Freemasons collaborated in faking the deaths of Larry King and Rush Limbaugh -- my first thought (after "Are you fucking kidding me?") is, "How on earth could you keep something like that hushed up?"  People are, sad to say, born gossips, and there is no way that the number of people that would be required to remain silent about such a thing -- not to mention the number required for faking the Moon landing or creating a climate change hoax -- would make it nearly certain that the whole thing would blow up in short order. 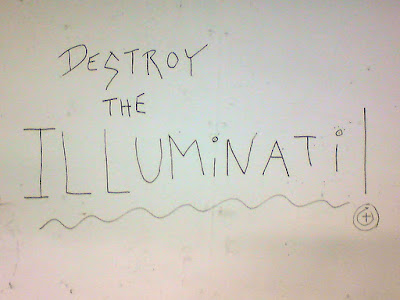 [Image licensed under the Creative Commons allen watkin from London, UK, Weird graffiti (3792781972), CC BY-SA 2.0]
It's nice, though, that I now have some mathematical support, instead of doing what I'd done before, which was flailing my hands around and shouting "It's obvious."  Grimes's elegant paper gives some serious ammunition against the proponents of conspiracy theories, and that's all to the good.  Anything we can do in that direction is helpful.

The problem is, Grimes's study isn't likely to convince anyone who isn't already convinced.  The conspiracy theorists will probably just think that Grimes is one of the Illuminati, trying to confound everyone with his evil mathe-magic.  Grimes alluded to this, in his rather somber closing paragraphs:

While challenging anti-science is important, it is important to note the limitations of this approach.  Explaining misconceptions and analysis such as this one might be useful to a reasonable core, but this might not be the case if a person is sufficiently convinced of a narrative.  Recent work has illustrated that conspiracy theories can spread rapidly online in polarized echo-chambers, which may be deeply invested in a particular narrative and closed off to other sources of information.  In a recent Californian study on parents, it was found that countering anti-vaccination misconceptions related to autism was possible with clear explanation, but that for parents resolutely opposed to vaccination attempts to use rational approach further entrenched them in their ill-founded views.  The grim reality is that there appears to be a cohort so ideologically invested in a belief that for whom no reasoning will shift, their convictions impervious to the intrusions of reality.  In these cases, it is highly unlikely that a simple mathematical demonstration of the untenability of their belief will change their view-point.

And there's also the problem that the conspiracy theorists view themselves as stalwart heroes, the only ones brave enough to blow the whistle on the Bad Guys.  My guess is that most of the adherents to conspiracy theories would read Grimes's paper, assume that the equation is correct, and conclude they're the geniuses who are exposing the conspiracy and causing it to fail.  You really can't win with these people.

Be that as it may, it's heartening to know that we now have some theoretical support for the idea that most conspiracy theories are bullshit.  Even if it doesn't change anyone's mind, it cheered me up considerably, and I'm thankful for that much.
***************************************
I've always been in awe of cryptographers.  I love puzzles, but code decipherment has seemed to me to be a little like magic.  I've read about such feats as the breaking of the "Enigma" code during World War II by a team led by British computer scientist Alan Turing, and the stunning decipherment of Linear B -- a writing system for which (at first) we knew neither the sound-to-symbol correspondence nor even the language it represented -- by Alice Kober and Michael Ventris.
My reaction each time has been, "I am not nearly smart enough to figure something like this out."
Possibly because it's so unfathomable to me, I've been fascinated with tales of codebreaking ever since I can remember.  This is why I was thrilled to read Simon Singh's The Code Book: The Science of Secrecy from Ancient Egypt to Quantum Cryptography, which describes some of the most amazing examples of people's attempts to design codes that were uncrackable -- and the ones who were able to crack them.
If you're at all interested in the science of covert communications, or just like to read about fascinating achievements by incredibly talented people, you definitely need to read The Code Book.  Even after I finished it, I still know I'm not smart enough to decipher complex codes, but it sure is fun to read about how others have accomplished it.
[Note: if you purchase this book using the image/link below, part of the proceeds goes to support Skeptophilia!]