When I was in freshman lit -- a lot of years ago -- we were assigned to read and analyze Robert Frost's classic poem, "Stopping by Woods on a Snowy Evening."

Mostly what I remember about the discussion that ensued was the professor telling us that when an interviewer asked Frost himself what the poem meant, Frost replied that it wasn't intended to be allegorical, or symbolic of anything; it was simply a recounting of a scene, a weary traveler pausing for a moment to appreciate the beauty of a snowy woodland.

"Of course," the professor went on, cheerfully confident, "we know that a poet of Frost's stature wouldn't produce anything that simplistic -- so let's see what symbolism we can find in his poem!"

I recall being kind of appalled, mostly at the professor's hubris in thinking that his own opinions about meaning overrode what the poet himself intended.  Since then, though, I've begun to wonder.  I still think the professor was a bit of a cocky bastard, don't get me wrong; but I've come to realize that creativity implies a relationship -- it's not as simple as writer (or artist or composer) creating, and reader (or observer or listener) consuming.

This topic comes up because a couple of days ago, a friend of mine sent me a link to a video by Aldous Harding, a brilliant singer/songwriter from New Zealand, performing her song "The Barrel." 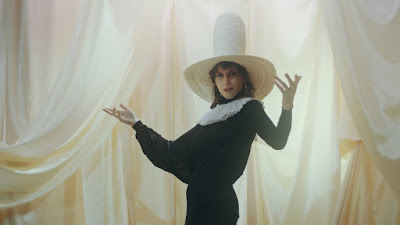 The song is weird, mesmerizing, strangely beautiful, and the video is somewhere in that gray area at the intersection of "evocative" and "fever dream."  The lyrics are downright bizarre in places:

What does it mean?  Harding herself wants to leave that, at least in part, up to the listener.  In an interview with NPR, she said, “I realized that the video was a well-intended opinion of mine to just keep it loose.  I feel we’re expected to be able to explain ourselves...  But I don’t necessarily have that in me the way you might think."
It's wryly funny, especially in light of the long-ago pronouncements of my freshman lit professor, that a lot of people are weighing in on the song and interpreting it in a variety of mutually-exclusive ways.  One writer said that it's about female empowerment and escaping from abusive relationships.  Another suggests that it describes how "the scariest thing is looking in the mirror and not recognising what you see staring back at you."  A review in The Guardian lists other interpretations that have been suggested:

Depending on whose interpretation you plumped for, the video was either a homage to Alejandro Jodorowsky’s surreal 1973 film The Holy Mountain, a nod to the national dress of Wales (where [Harding's album] Designer was partly recorded and where Harding currently resides), analogous to the faintly disturbing vision of pregnancy found in Sylvia Plath’s 1960 poem "Metaphors," inspired by postmodernist poet Susan Howe’s book Singularities, which surveys the 17th-century First Nation wars in New England, [or] somehow related to menstruation.

Watch it... and see what you think.
Like my lit professor, what gets me about a lot of these interpretations is how certain they sound.  My own reaction was that the lyrics fall into the realm of "nearly making sense," and that part of why they're fascinating -- and why I've watched the video several times -- is that there's a real art to using language that way, neither being too overt about what you mean nor devolving into complete nonsense.
Creativity, I think, implies a relationship between producer and consumer, and because of that, the producer can't always control where it goes.  Readers, listeners, and observers bring to that activity their own backgrounds, opinions, and knowledge, and that is going to shape what they pull out of the creative experience.  And, of course, this is why sometimes that relationship simply fails to form.  I love the music of Stravinsky, while it leaves my wife completely cold -- she thinks it's pointless cacophony.  A lot of people are moved to tears by Mozart, but I find much of his music inspires me to say nothing more than "it's nice, I guess."
It's part of why I have zero patience for genre snobs and self-appointed tastemakers.  If some piece of creative work inspires you, or evokes emotions in you, it's done its job, and no one has the slightest right to tell you that you're wrong for feeling that way.  Honestly, I'm delighted if Mozart grabs you by the heart and swings you around; that's what music is supposed to do.  Just because I'm more likely to have that experience listening to Firebird than Eine Kleine Nachtmusik doesn't mean I'm right and you're wrong; all it means is that human creativity is complex, intricate, and endlessly intriguing.
So don't take it all that seriously if someone tells you what a poem, lyric, or piece of art or music means, even if that person is a college professor.  Enjoy what you enjoy, and bring your own creativity to the relationship.  It may be that Robert Frost didn't mean "Stopping by Woods on a Snowy Evening" to be anything more than a depiction of a scene; but that doesn't mean you can't bring more to the reading, and pull more out of the reading, yourself.
And isn't that what makes the creative experience magical?