The eyes have it

A friend of mine has characterized the teaching of science in elementary school, middle school, high school, and college as follows:

This is pretty close to spot-on. The universe is a complicated place, and it's inevitable that to introduce children to science you have to simplify it considerably.  A seventh grader could probably understand and be able to apply F = ma, but you wouldn't get very far if you started out the with the equations of quantum electrodynamics.

But there are good ways to do this and bad ways.  Simplifying concepts and omitting messy complications is one thing; telling students something that is out-and-out false because it's familiar and sounds reasonable is quite another.  And there is no example of this that pisses me off more than the intro-to-genetics standard that brown eye color in humans is a Mendelian dominant allele, and the blue-eyed allele is recessive.

How many of you had your first introduction to Mendel's laws from a diagram like this one? 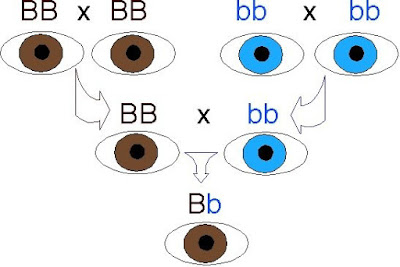 This is one of those ideas that isn't so much an oversimplification as it is ridiculously wrong.  Any reasonably intelligent seventh-grader would see this and immediately realize that not only do different people's brown and blue eyes vary in hue and darkness, there are hazel eyes, green eyes, gray eyes, and various combos -- hazel eyes with green flecks, for example.  Then there's heterochromia -- far more common in dogs than in humans -- where the iris of the right eye has a dramatically different color than the left. 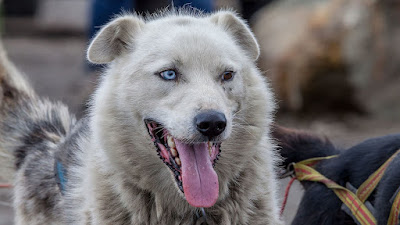 When I taught genetics, I found that the first thing I usually had to get my students to do was to unlearn the things they'd been taught wrong, with eye color inheritance at the top of the list.  (Others were that right-handedness is dominant -- in fact, we have no idea how handedness is inherited; that red hair is caused by a recessive allele; and that dark skin color is dominant.)  In fact, even some traits that sorta-kinda-almost follow a Mendelian pattern, such as hitchhiker's thumb, cleft chin, and attached earlobes, aren't as simple as they might seem.

But there's nowhere that the typical middle-school approach to genetics misses the mark quite as badly as it does with eye color.  While it's clearly genetic in origin -- most physical traits are -- the actual mechanism should rightly be put in that unfortunate catch-all stuffed away in the science attic:

The good news, though, and what prompted me to write this, is a paper this week in Science Advances that might at least deal with some of the "poorly understood" part.  A broad-ranging study of people from across Europe and Asia found that eye color in the people studied was caused by no fewer than sixty-one different gene loci.  Each of these controls some part of pigment creation and/or deposition, and the variation in these loci from population to population is why the variation in eye appearance seems virtually infinite.

Human eye color is highly heritable, but its genetic architecture is not yet fully understood.   We report the results of the largest genome-wide association study for eye color to date, involving up to 192,986 European participants from 10 populations.  We identify 124 independent associations arising from 61 discrete genomic regions, including 50 previously unidentified.  We find evidence for genes involved in melanin pigmentation, but we also find associations with genes involved in iris morphology and structure.  Further analyses in 1636 Asian participants from two populations suggest that iris pigmentation variation in Asians is genetically similar to Europeans, albeit with smaller effect sizes.  Our findings collectively explain 53.2% (95% confidence interval, 45.4 to 61.0%) of eye color variation using common single-nucleotide polymorphisms.  Overall, our study outcomes demonstrate that the genetic complexity of human eye color considerably exceeds previous knowledge and expectations, highlighting eye color as a genetically highly complex human trait.

And note that even this analysis only explained a little more than half of the observed variation in human eye color.

Like I said, it's not that middle-school teachers should start their students off with a paper from Science Advances.  I usually began with a few easily-observable traits from the sorta-kinda-Mendelian list, like tongue rolling and hitchhiker's thumb.  These aren't quite as simple as they're usually portrayed, but at least calling them Mendelian isn't so ridiculously wrong that when students find out the correct model -- most often in college -- they could accuse their teachers of lying outright.

Eye color, though.  That one isn't even Mendelian on a superficial level.  Teaching it that way is a little akin to teaching elementary students that 2+2=5 and figuring that's close enough for now and can be refined later.  So to teachers who still use brown vs. blue eye color as their canonical example of a dominant and recessive allele:

Please find a different one.

****************************************
Last week's Skeptophilia book-of-the-week was about the ethical issues raised by gene modification; this week's is about the person who made CRISPR technology possible -- Nobel laureate Jennifer Doudna.
In The Code Breaker: Jennifer Doudna, Gene Editing, and the Future of the Human Race, author Walter Isaacson describes the discovery of how the bacterial enzyme complex called CRISPR-Cas9 can be used to edit genes of other species with pinpoint precision.  Doudna herself has been fascinated with scientific inquiry in general, and genetics in particular, since her father gave her a copy of The Double Helix and she was caught up in what Richard Feynman called "the joy of finding things out."  The story of how she and fellow laureate Emmanuelle Charpentier developed the technique that promises to revolutionize our ability to treat genetic disorders is a fascinating exploration of the drive to understand -- and a cautionary note about the responsibility of scientists to do their utmost to make certain their research is used ethically and responsibly.
If you like biographies, are interested in genetics, or both, check out The Code Breaker, and find out how far we've come into the science-fiction world of curing genetic disease, altering DNA, and creating "designer children," and keep in mind that whatever happens, this is only the beginning.
[Note: if you purchase this book using the image/link below, part of the proceeds goes to support Skeptophilia!]