The difficulty, of course, is given that a huge amount of our history has either highly unreliable records or else no records at all, a lot of mysteries will never get resolved satisfactorily.  Two examples I read about recently which are as fascinating as they are frustrating are the true identity of Jack the Ripper, and the fate of the "Princes in the Tower" -- the two young sons of English King Edward IV, who disappeared in around 1483 and were probably murdered.

As a quick aside, it bears mention that in the latter case the alleged culprit, King Richard III, was not the horrific, amoral villain you might think, if your only source is the play by Shakespeare.  He was actually competent and not a selfish monster, nor was he a hunchback; the Shakespearean smear job makes for great theater, and appeased the anti-Yorkist monarchy of the time, but has unfairly tarred a man who -- if Henry Tudor hadn't decided to swipe the throne -- probably would have been considered a pretty good leader.  He may still have had the princes killed, though; such behavior by a king anxious to eliminate rivals and put his own claim to the throne beyond question was not at all uncommon at the time.  But Shakespeare having Queen Margaret call him a "deformed, bunch-backed toad" seems a little excessive.

Sometimes there's an entire ethnic group that is mysterious, again usually because we have mostly archaeological evidence to go by, supplemented by dubiously accurate accounts written down by other (often hostile) cultures.  In fact, the whole reason why the subject of historical mysteries comes up is because of a paper I read a couple of days ago about the Scythians, the central Asian "horse warriors" who bumped up against the cultures their territory bordered -- principally Greece, Rome, China, and Persia -- and whose accounts form the basis of our knowledge of who they were. 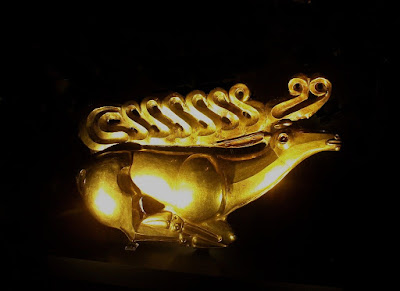 In "Ancient Genomic Time Transect from the Central Asian Steppe Unravels the History of the Scythians," which appeared last week in Science Advances and was authored by a huge team led by Guido Alberto Gnecchi-Ruscone of the Max Planck Institute for the Science of Human History, we read about a genomic study of the remains of over a hundred individuals from Scythian burial sites, and find out that they were hardly a single unified ethnic group -- their genomes show a significant diversity and represent multiple origins.  So the Scythians seem more like a loose confederation of relatively unrelated people than the single unified, monolithic culture of fierce nomads depicted in the writings of their rivals.

The Scythians were a multitude of horse-warrior nomad cultures dwelling in the Eurasian steppe during the first millennium BCE.  Because of the lack of first-hand written records, little is known about the origins and relations among the different cultures.  To address these questions, we produced genome-wide data for 111 ancient individuals retrieved from 39 archaeological sites from the first millennia BCE and CE across the Central Asian Steppe.  We uncovered major admixture events in the Late Bronze Age forming the genetic substratum for two main Iron Age gene-pools emerging around the Altai and the Urals respectively.  Their demise was mirrored by new genetic turnovers, linked to the spread of the eastern nomad empires in the first centuries CE.

If that's not intriguing enough, last week there was also new information uncovered about an artifact from the same place but a lot earlier, the "Shigir idol," which was uncovered from a peat bog in the Ural Mountains in 1890.  Its age is apparently greater than scientists have thought -- the new study suggests it's about 12,500 years old, making it the oldest wooden representation of a human figure known.

The Shigir idol [Image licensed under the Creative Commons Владислав Фальшивомонетчик, Большой шигирский идол, CC BY-SA 3.0]
"The idol was carved during an era of great climate change, when early forests were spreading across a warmer late glacial to postglacial Eurasia," said study lead author Thomas Terberger, of the University of Göttingen, in an interview in the New York Times.  "The landscape changed, and the art—figurative designs and naturalistic animals painted in caves and carved in rock—did, too, perhaps as a way to help people come to grips with the challenging environments they encountered."
What it brings home to me is the humbling thought of how little we actually know of our own history.  For every mystery we know about -- like Jack the Ripper and the Princes in the Tower we began with -- there are probably thousands of other equally fascinating events we don't have any way of knowing about.  The vast majority of humans died without leaving any extant traces, and since human remains and biodegradable artifacts (like the Shigir idol) only survive under specific (and uncommon) conditions, the vast majority of those are gone beyond recall, too.  When we luck out and find tangible evidence, like the Scythian burials, we can sometimes glean further information about a culture we knew little about.  The unfortunate but tantalizing truth, though, is that most of our own history is both unknown and unknowable.
Which for me makes it even more appealing, although inevitably, as frustrating as it is fascinating.
*********************************
The sad truth of our history is that science and scientific research has until very recently been considered the exclusive province of men.  The exclusion of women committed the double injury of preventing curious, talented, brilliant women from pursuing their deepest interests, and robbing society of half of the gains of knowledge we might otherwise have seen.
To be sure, a small number of women made it past the obstacles men set in their way, and braved the scorn generated by their infiltration into what was then a masculine world.  A rare few -- Marie Curie, Barbara McClintock, Mary Anning, and Jocelyn Bell Burnell come to mind -- actually succeeded so well that they became widely known even outside of their fields.  But hundreds of others remained in obscurity, or were so discouraged by the difficulties that they gave up entirely.
It's both heartening and profoundly infuriating to read about the women scientists who worked against the bigoted, white-male-only mentality; heartening because it's always cheering to see someone achieve well-deserved success, and infuriating because the reason their accomplishments stand out is because of impediments put in their way by pure chauvinistic bigotry.  So if you want to experience both of these, and read a story of a group of women who in the early twentieth century revolutionized the field of astronomy despite having to fight for every opportunity they got, read Dava Sobel's amazing book The Glass Universe: How the Ladies of the Harvard Observatory Took the Measure of the Stars.
In it, we get to know such brilliant scientists as Willamina Fleming -- a Scottish woman originally hired as a maid, but who after watching the male astronomers at work commented that she could do what they did better and faster, and so... she did.  Cecilia Payne, the first ever female professor of astronomy at Harvard University.  Annie Jump Cannon, who not only had her gender as an unfair obstacle to her dreams, but had to overcome the difficulties of being profoundly deaf.
Their success story is a tribute to their perseverance, brainpower, and -- most importantly -- their loving support of each other in fighting a monolithic male edifice that back then was even more firmly entrenched than it is now.  Their names should be more widely known, as should their stories.  In Sobel's able hands, their characters leap off the page -- and tell you a tale you'll never forget.
[Note: if you purchase this book using the image/link below, part of the proceeds goes to support Skeptophilia!]