The scent of memory

When I was about nine years old, I went to live with my paternal grandmother for a year.

Ostensibly the reason was that my parents were in the process of building a house, and where they were living -- a room in my maternal grandfather's house -- there wasn't space for a kid.  My grandmother, on the other hand, lived in a rambling old house with tons of space.  Plus, I idolized my grandma, and had a rather fractious relationship with my parents, so the move resolved several problems simultaneously.

While living with my grandma, my bedroom was in the attic.  Don't think of a cramped, dark space; it was wide open, with dormer windows and lots of separate "rooms" with various nooks and crannies and alcoves and places to explore.  Got a little hot in the summer -- this was southern Louisiana, and there were lots of fans but no air conditioning except a single window-mounted unit down in the living room -- but it was a splendid retreat for a kid who was already a bit of a loner.

Because of the heat, I often slept with the windows open, and one of the two things that will always bring back memories of that year is the sound of church bells in the distance.  My grandma's house was a couple of blocks from Sacred Heart Catholic Church, and the bells ringing in the evening reminds me of those quiet nights in the attic room.

The other, and stronger, association is the smell of old books.

My grandma loved books.  The attic walls were lined with shelves, and filled with what looked to my young eyes like thousands of books, from old cloth-bound textbooks to paperback novels, and everything in between.  The dusty, dry smell of old books brings me back instantaneously; I can almost see the book sitting in my lap as I sat cross-legged on the attic floor, feel texture of the brittle, yellowed pages and the worn cover.  The memories are vivid, detailed, and immediate. 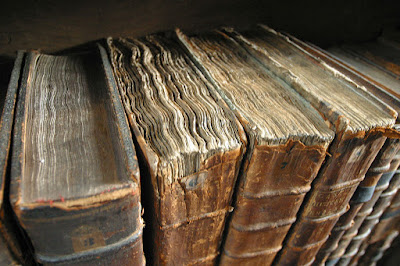 I've always wondered why smells can evoke such powerful memories.  It's a common response, but despite this, the underlying mechanism has remained elusive.  But now a study out of Northwestern University, published this week in Progress in Neurobiology, has shed some light on the relationship between olfaction and memory -- and found that it results from an underlying structural feature of the human brain.

The team, led by neuroscientist Guangyu Zhou, studied the connections between the olfactory centers and other parts of the brain, and also looked at activity levels using fMRI technology.  They found something fascinating -- that the olfactory centers have a higher degree of connectivity with the hippocampus (one of our main memory centers) than any other sense, and the activity level in those connections oscillates to match the rate of our breathing.

"During evolution, humans experienced a profound expansion of the neocortex that re-organized access to memory networks," said study co-author Christina Zelano, in an interview with Science Daily.  "Vision, hearing and touch all re-routed in the brain as the neocortex expanded, connecting with the hippocampus through an intermediary -- association cortex -- rather than directly.  Our data suggests olfaction did not undergo this re-routing, and instead retained direct access to the hippocampus."

It does make me wonder a bit about my own case, though, because after decades of sinus problems, my sense of smell is pretty lousy.  It's not gone completely, but I certainly don't have the sensitive nose that many have.  (Which has a variety of downsides, including explaining why I was assigned to clean up when our septic tank backed up, and also give our dogs baths the time they got skunked at five AM.)  Now, there's the additional complication of COVID-19 infection wiping out people's senses of smell entirely.  "Loss of the sense of smell is underestimated in its impact," Zelano said.  "It has profound negative effects of quality of life, and many people underestimate that until they experience it.  Smell loss is highly correlated with depression and poor quality of life...  Most people who lose their smell to COVID regain it, but the time frame varies widely, and some have had what appears to be permanent loss.  Understanding smell loss, in turn, requires research into the basic neural operations of this under-studied sensory system."

I'm a little dubious that my poor sense of smell has anything to do with my tendency toward depression, but that they correlate in my case is at least interesting.  It's reassuring that I still do have memories triggered by smells, so even if I might not be having the full experience of the sense of smell, that part of the system still seems to be working just fine.

Especially the smell of old books and memories of living with my grandmother.  That one is intact and fresh, and (fortunately) a very positive association.  Add it to some sounds -- church bells, the rhythmic drone of an oscillating fan, the song of whippoorwills at night -- and I can close my eyes and for a moment, be nine years old again.

***************************************
I've always been in awe of cryptographers.  I love puzzles, but code decipherment has seemed to me to be a little like magic.  I've read about such feats as the breaking of the "Enigma" code during World War II by a team led by British computer scientist Alan Turing, and the stunning decipherment of Linear B -- a writing system for which (at first) we knew neither the sound-to-symbol correspondence nor even the language it represented -- by Alice Kober and Michael Ventris.
My reaction each time has been, "I am not nearly smart enough to figure something like this out."
Possibly because it's so unfathomable to me, I've been fascinated with tales of codebreaking ever since I can remember.  This is why I was thrilled to read Simon Singh's The Code Book: The Science of Secrecy from Ancient Egypt to Quantum Cryptography, which describes some of the most amazing examples of people's attempts to design codes that were uncrackable -- and the ones who were able to crack them.
If you're at all interested in the science of covert communications, or just like to read about fascinating achievements by incredibly talented people, you definitely need to read The Code Book.  Even after I finished it, I still know I'm not smart enough to decipher complex codes, but it sure is fun to read about how others have accomplished it.
[Note: if you purchase this book using the image/link below, part of the proceeds goes to support Skeptophilia!]