For ten years, I was part of a Celtic dance band called Crooked Sixpence.  The name, if you're curious, comes from an English children's rhyme:

There was a crooked man, and he walked a crooked mile,
He found a crooked sixpence beside a crooked stile.
He had a crooked cat and it caught a crooked mouse,
And they all lived together in a little crooked house.

Finding a "crooked sixpence" (a bent silver coin) was considered lucky, and we thought that was a good moniker for our group.

Playing for contradances and English country dances was brilliant fun, and I attribute my getting over the awful stage fright I suffered from when I was younger to being a part of this wonderful trio. 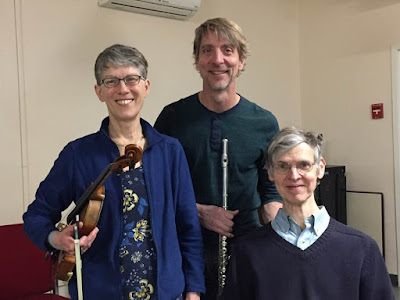 Sadly, we disbanded when our fiddler, Kathy, moved back to Ireland.  Of course, shortly thereafter the pandemic hit and all the public performances were cancelled, pretty much for the rest of the year, so I doubt we'd have done much playing anyhow.

Since our breakup, all my music has been alone in my house -- I haven't had any jam sessions with friends for a year and a half.  While I do love playing, whether by myself or with others, there is something about making music together that is qualitatively different than playing solo.

This was the subject of a fascinating study at Bar-Ilan University and the University of Chicago that came out in the journal American Psychologist last week.  The team, led by David Greenberg, looked at five measures of five key functions in the brain: empathy, the levels of three hormones (dopamine, oxytocin, and cortisol), and language structures, before and after having an experience of playing music in a group.

What they found wouldn't come as a shock to anyone who has made music with others.  Levels of empathy, as measured by psychological assessment, went up.  Dopamine and oxytocin levels, both connected with reward, pleasure, and pair bonding, both went up as well.  Cortisol, a hormone associated with stress, went down.  The neurological systems involved in language -- both listening and producing -- both spiked in activity, especially when the playing or singing was done in harmony, not in unison.

"Music connects us to our humanity," Greenberg said, in a press release from the American Association for the Advancement of Science.  "Through social neuroscience, we can discover that our sense of social connection isn't just subjective, but that it is rooted in important brain mechanisms.  Especially in a time when there is so much social division around the world, we need to find new ways to to bridge cultures in conflict.  Music is one of those ways.  We hope our research will lead to more grass-roots programs like the West-Eastern Divan Orchestra and the Jerusalem Youth Chorus, which bring people from differing cultures together through music."
Which brings home once again how much I miss making music with friends.  We've all felt pretty isolated during the last year and a half, and now that we're slowly and hesitantly coming out of isolation, maybe it's time to start making a beautiful noise together again.
The world as a whole sure could use something positive.  And, I suspect, so could most of us as individuals... and small groups of friends together.