A moment of Judeo-Christian silence

Let me start out with a reality check: despite what the Religious Right and the pseudo-pundits on Fox News want you to believe, there is no law against students praying in public school.  Nor is it against the rules for any student in any public school in the United States to have, or read, a Bible.  Nor to cite it (or Jesus) as an influence in their lives in personal essays.  No school has stopped students from reciting the Pledge of Allegiance because it contains the words "under God."  Bible study and Christian fellowship groups are allowed to hold meetings on school property as long as attendance is completely voluntary.

Anyone who claims otherwise is wrong at best, and flat-out lying through their teeth at worst.

What is not legal is mandating prayer in school, or using Christian membership or affirmation as a qualification for... well, anything.  Schools cannot legally force students to follow the precepts of any religion.  The upshot is that public schools are simply not the venue for generating religious adherence, or (for that matter) preventing it.  It is no more teachers' place to alter their students' religious views in either direction than it is for churches to teach their congregations algebra.

As a personal case in point:

As a brief aside, there is an explicit conflict in the "under God" part of the Pledge, in my opinion, because if it's recited by students -- which it still is, in public schools across the country -- it pressures non-religious students to affirm something they don't believe it (i.e., to lie).  I find that people who argue against taking out the words "under God" (which, by the bye, were not original to the Pledge but were added in the 1950s) often can't come up with a cogent reason why the words should be recited in a public school where (1) attendance is compulsory, and (2) there are students (and adults) of all different gradations of belief and disbelief.

But of course, that "live and let live" (or, as my mom used to put it, "your rights end where my nose begins") attitude isn't enough for the sanctimonious spokespeople of the Religious Right, who will stop at nothing to inject religion back into public schools.  And not just any religion, of course: 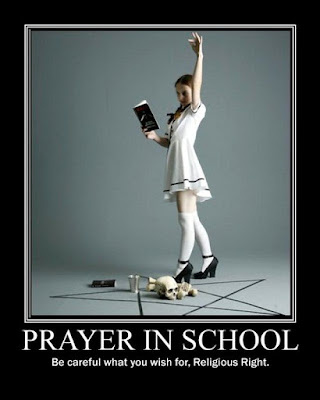 If there was any doubt about this, it should be put to rest by what happened in Florida (of course it was in Florida) last week.  A new law was signed by Governor Ron DeSantis that will mandate a sixty-second "moment of silence" that must be observed in all public schools.  The proponents gave some lip service to a broad-minded sentiment behind this -- that students need to have time to engage in meditative self-reflection -- but the real reason was given away by the bill's sponsor, Representative Randy Fine, who tweeted triumphantly, "Just joined Governor DeSantis to sign my fourth bill of the 2021 Legislative Session, allowing prayer back into schools via a moment of silence for all our schoolchildren.  I won't stop fighting against woke radicals who which [sic] to drive out Judeo-Christian values from every aspect of our lives!"

You'd think that anyone with any sense would recognize that saying this explicitly is just asking for the filing of lawsuits to invalidate the new legislation, but DeSantis, who certainly wouldn't be in contention for the "smartest governor in the United States" award, not only didn't contradict Fine but immediately agreed.  "The idea that you can push God out of every institution and be successful," DeSantis said, "I'm sorry, our Founding Fathers did not believe that."

"Students are free to believe what they want" isn't enough for these people; Fine and DeSantis make it clear that the "moment of silence" bill is just a foot in the door for reinserting prayer -- Christian prayer, of course -- back into public school classrooms.  And call me a "woke radical" if you like, but no compulsory prayer of any kind belongs in publicly funded institutions.

And for fuck's sake, it's not like public school teachers have time to do some kind of subversive anti-religious indoctrination.  I was a teacher for 32 years, and never once did I say, "Okay, kids, we've got an extra twenty minutes today, I will now teach you how to blaspheme!"  I had enough on my hands trying to get high schoolers to understand the Krebs Cycle and Mendel's Laws and the reactions of photosynthesis, I definitely didn't have the space in the curriculum to devote to undermining students' dearly-held religious beliefs.

Nor, might I add, did I have the desire to.  I may be a staunch atheist myself, but I am firmly of the opinion that everyone arrives at their understanding of how the universe works in their own time and fashion, and while I may disagree with someone's worldview, it's not my place to criticize it -- or honestly, even to make a judgment about it at all.