Today's post is a scientific puzzle that -- so far -- doesn't have an answer.

I'm sure you've all had the lovely experience of seeing meteors in the night sky.  Some of you might even have seen meteor showers, when there can be hundreds of "shooting stars" per hour.  Bright as they are, most meteors are the size of a small pebble; the intense light comes from the heating caused by the friction of passage through the atmosphere.  The speed they're traveling determines how fast they heat up, and that's controlled by the angle with which the meteor intersects with the moving Earth; they can be going anywhere between 11 and 72 kilometers per second.

Sometimes, larger chunks of rock strike the Earth.  Sometimes much larger.  The meteor that exploded over Chelyabinsk, Russia in 2013 is estimated to have been around twenty meters in diameter, and to have weighed on the order of 12,000 tons.  The explosion released an energy equivalent of 400 kilotons of TNT, which is about thirty times that released from the atomic bomb that destroyed Hiroshima. 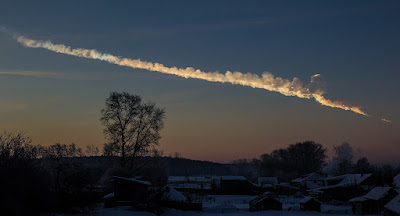 Big rocks are the exception, of course.  Most meteors are tiny... but there are lots of them.  Honestly, I didn't realize how much meteoritic material hits the Earth.  Given how small most of it is, the vast majority of it goes unnoticed.  But the current estimates are that 44,000 kilograms of meteorites land on the Earth every day.  Most of it lands in the oceans (which, after all, cover seventy percent of the Earth's surface), but the rest of it becomes part of the dust that's floating in the air, and that we give virtually no thought to.

The origin of meteors and meteorites (as they're known once they hit the Earth) has always been thought to be random bits of rocky junk left over from the formation of the Solar System; meteor showers mostly come from the passage of the Earth through the orbital paths of comets.  (Comets, being basically big dirty snowballs, partly evaporate with each passage near the Sun, and any particles of rock embedded in the ice get left behind in a trail corresponding to the comet's orbit.)  Because the origin of meteoritic material was thought to be pretty random, the expectation was that even similar types of meteorites would differ in composition, as they'd come from different sources in the asteroid belt and elsewhere.

Well, turns out that isn't true.  A group of scientists led by Birger Schmitz of Lund University set about to study the only meteorites that hang around for a while in the geological record -- chondrites, or stony meteorites.  (The other main type, iron-nickel meteorites, tend to oxidize pretty rapidly once they hit the Earth, so there aren't any particularly old iron-nickel meteorites known.)  Even the chondrites break down and erode, but there's a part of them -- grains of a mineral called chrome spinel -- that are resistant enough to degradation that they can last a billion years essentially unchanged.

And that's when they got a surprise.

Not only has the flux of meteorites barely changed over the entirety of geological history, the composition of the chrome spinel crystals hasn't changed, either -- leading Schmitz et al. to conclude that the vast majority of meteors come from the same, and as yet unidentified, source.

The meteoritic material falling on Earth is believed to derive from large break-up or cratering events in the asteroid belt.  The flux of extraterrestrial material would then vary in accordance with the timing of such asteroid family-forming events.  In order to validate this, we investigated marine sediments representing 15 timewindows in the Phanerozoic for content of micrometeoritic relict chrome-spinel grains (>32 μm).  We compare these data with the timing of the 15 largest break-up events involving chrome-spinel–bearing asteroids (S- and V-types).  Unexpectedly, our Phanerozoic time windows show a stable flux dominated by ordinary chondrites similar to today’s flux.  Only in the mid-Ordovician, in connection with the breakup of the L-chondrite parent body, do we observe an anomalous micrometeorite regime with a two to three orders-of-magnitude increase in the flux of L-chondritic chrome-spinel grains to Earth.  This corresponds to a one order-of-magnitude excess in the number of impact craters in the mid-Ordovician following the L-chondrite break-up, the only resolvable peak in Phanerozoic cratering rates indicative of an asteroid shower.  We argue that meteorites and small (<1-km-sized) asteroids impacting Earth mainly sample a very small region of orbital space in the asteroid belt.  This selectiveness has been remarkably stable over the past 500 Ma.

So as baffling as it seems, it looks like most of the stony meteors out there come from one source -- probably the collision of two asteroids in the very, very distant past.  This impact created a huge cloud of fragments of different sizes but of relatively uniform composition, and that's the stuff that's been raining down on Earth for the past billion years.

Think about that next time you see a "falling star" on a clear, cloudless night.  You're seeing a relic of a collision that occurred back when the vast majority of living things were single-celled creatures living in the ocean.  That little pebble creating a streak of light across the sky has been floating around in space ever since, finally intersecting Earth's path and burning up in the atmosphere.

Just in time for you to make a wish.