Creatures from the permafrost

In the episode of The X Files called "Ice," some geophysicists working in northern Alaska bring up a 250,000 year old ice core from what is thought to be a buried meteor crater.  Of course, being The X Files, the ice core contains frozen (but not dead) organisms that are pathogenic to humans.  Like the rabies virus, these pathogens make you violent, so that you'll injure and then infect other hosts; unlike the rabies virus, these are macroscopic, and in fact can be seen moving under the skin of infected individuals.

Mulder and Scully barely escape with their lives, but not before death and destruction is wrought amongst the hapless geophysicists, only one of whom survives.

To say that show didn't specialize in cheerful endings is a vast understatement.

The reason this rather horrifying episode came to mind is a discovery announced last week by some Russian scientists of organisms brought up from 24,000 year old Siberian permafrost.  To put this into perspective, when these organisms were buried, there were still woolly rhinos, mammoths, and cave bears stalking around the place.  And when the unearthed animals were warmed back up, they cheerfully came back to life and began to reproduce.

Well, maybe not "cheerfully."  It's hard to tell, because these animals are bdelloid rotifers, which are known for having a fairly poor repertoire of facial expressions.  Plus, they reproduce parthenogenetically, meaning that the species is all female, and they produce offspring without having sex.

So there goes another reason they'd be cheerful about the whole thing. 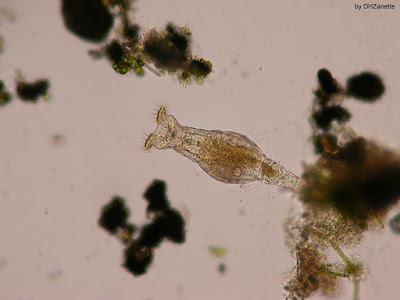 As amazing as it may seem, rotifers are actually true animals, despite their small size.  They have eyespots, a nervous system, a brain (albeit a tiny one), and a complete digestive tract.  Plus, they're right up there with tardigrades for indestructibility.  There are modern bdelloids, and one of the things the scientists want to do is to compare the genomes of the current ones with the ones that were resurrected from the permafrost.  Because they're parthenogenetic, their genomes should only vary because of mutations -- the advantage of sex is that it scrambles the genes every generation, producing greater variation in the population.

Also, it's kind of fun, but that probably is not as significant evolutionarily.

As far as Life Following Art, and the scientists digging around in Siberia releasing some horrific pathogen, I probably should cool my jets.  "The most spectacular implication of the research was that there may be all sorts of animals frozen in the permafrost that could awake as global warming melts the permafrost," said Matthew Cobb, professor of zoology at the University of Manchester, who was not involved in the research.  "[This] doesn’t mean that terrifying things are going to come out and eat us, but it gives scientists the possibility of studying how the rotifer has adapted to resist the bad effects of freezing, and… [the] opportunity to explore the difference between existing species and their predecessors."

But of course, that's what he would say.  Right before we all end up with worms squiggling around under our skin and making us violently insane.

So that's our fascinating but kind of scary scientific discovery for today.  A critter who can go into stasis for 24,000 years, frozen solid, without food, and come back to life as if nothing had happened.  It brings to mind cryogenic stasis of humans -- a staple of space-travel science fiction -- I wonder what we might learn about how bdelloid rotifers can accomplish such an amazing feat of survival.  And it does make me wonder what else is down there, waiting to be brought back to life.  Given the rate the world is warming, and how fast the permafrost is melting, we may find that out all too soon.