You've heard about the whole Reptilian Alien thing, right?  That prominent individuals, especially world leaders but also including a lot of entertainers, are actually aliens in human suits?  Well, just yesterday, a loyal reader of Skeptophilia sent me a link to the homepage of the Doppelgänger and Identity Research Society, which takes it one step further: 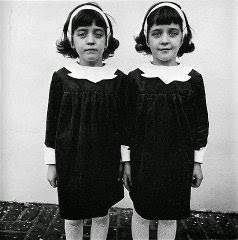 [Image is in the Public Domain]
But unlike ordinary twins, or even clones, in which both individuals coexist, here the duplicate has replaced the original, and the original is no more.

In other words: Brad Pitt isn't actually Brad Pitt, he's someone who looks, talks, and acts exactly like Brad Pitt.

Upon reading this, I was reminded of the quote from Spock on Star Trek: "A difference that makes no difference is no difference."  If there's only one Brad Pitt -- i.e., no one is really claiming that there are two of 'em walking around, as far as I can see -- and he is identical to Brad Pitt, doesn't that make him, um, Brad Pitt?

Apparently not.  Here's an explanation of the difference, from the site:

Humans have no means to create a soul in another human clone, therefore, human clones have no soul and no concept of right and wrong, no conscience and no compassion.  They have survival instinct and are greatly concerned about their own death, but not the welfare and death of others.

This explains why so many people today have no values, no morals, no ethics and are prone to violence.

They are more easily programmed through our mind-control type education and military training than are souled-humans with a freewill.  Clones have no freewill, only a sense of survival, and will act accordingly through conditioned behavior.

The eye is the window of the soul. In the eye of another souled-human you can sense the Light emanating from the soul, the God Spirit within.  As I said earlier, soul or God Spirit within, so there is no God-connection to the eternal Light of Creator Source.  Therefore, there is no the human clone has no spiritual discernment.  The eyes of a human clone may appear dull, blank, hollow, dark, vacant, lifeless, empty with no vibrancy or Light.  They have no reaction to or understanding of spiritual energy, concepts or conversation.

Well, notwithstanding the fact that the last paragraph could be describing me before I've had a cup of coffee in the morning, the whole thing seems pretty... subjective.  Even the website admits that the synthetic humans are just like regular humans, down to the genetic level, even though their science seems a little shaky in other respects:

Certain tissues extracted from cattle are the starting point.  (This is part of the reason for cattle mutilations.)  The process is an advancement of a process discovered in the late 1950’s.  This 1959 experiment was reported in a book in 1968 called The Biological Time Bomb by Gordon Rettray Taylor.  Taylor describes the experiment done in France, "They had extracted DNA from the cells of the khaki Campbells and had injected it into the white Pekins, thinking that just possibly the offspring of the latter might show some character derived from khaki Campbells.  To their astonishment the actual ducks they injected began to change.  Their white feathers darkened, and their necks began to take on the peculiar curve which is a mark of the khaki Campbell."  The scientists working under the auspices of the Rothschilds, (who are directed by Satan himself) developed this process by working at secret breakneck speed.  They developed an advanced development of the process they discovered with the DNA chicken experiment.  By the late 1970’s, synthetic people could be produced by the Illuminati.

So you have to mutilate cattle to get tissue samples instead of just buying a package of ground beef at the grocery store, ducks are the same thing as chickens, the Rothschilds are directed by Satan, and therefore there are bunches of synthetic soulless people walking around.  Got it.

Apparently, though, that's not all. Not only do we have fake people walking around, some of them are actually robots. Jimmy Carter, for example:

Organic robotoids: This is an "artificial life" form that is created through processes that are totally different than cloning or synthetics.  Organic robotoid technology is being made to make exact as possible copies of important people such as Presidents and some of their staff.  For instance, the Jimmy Carter who came to Portland a few years ago who I stood two feet away from and examined visually was not the Jimmy Carter that had run for President.  On Easter, 1979 the first robotoid model of Jimmy Carter replaced the man Jimmy Carter.  By the time "Carter" was seen by me, they must have been on at least robotoid no. 100.

Myself, I'm surprised that anyone who visually examined a former president of the United States from two feet away wasn't immediately escorted from the premises by men in dark suits and sunglasses.  But I guess he was lucky.  Or maybe it was just because the Dark Suits knew that if something happened to Jimmy Carter Version 100, they could always replace him with Version 101.

The site provides hours of bizarre exploration, wherein we find out that not only are Brad Pitt and Jimmy Carter synthetic humans, or clones, or robotoids, or something, so are:
The last one made me choke-snort coffee all over my computer, because David Icke is one of the people who is always supposedly blowing the whistle on the Illuminati and the New World Order and the Bilderburg Group and what-have-you, and now we learn that he's not really David Icke, he's someone else who not only looks just like David Icke, but also has David Icke's rather tenuous grasp on reality?  Evidently so:

David Icke got replaced 2007 by a synthetic clone.  We... did a lot of mathematic facial geometry analysis and other stuff.  Also we found out that the new David Icke has no birthmarks anymore in his face, a lot bigger shoulders and his hands have a different geometry.  Also the way he use his muscles of the face, shoulders and hands, even the fingers and mostly the eyes and the bigger nose with its different form is a proof.  Also the different color of his skin.  Its [sic] a very fine difference of the color.  Also the distance between body and head is now different.  Also his psychology while talking.  We did a very deep analysis of a lot famous people and we are experts for doing this.  We work all together and are as objective as possible.

Well, there you are, then. They did lots of "stuff" and found out that (amongst other things) David Icke's head has moved farther away from his body.  Plus, they say they're being objective, so pretty much q.e.d., as far as I can see.

So, anyway, that's today's dip in the deep end of the pool.  Me, I'm going to get a second cup of coffee, so I can appear less blank and hollow-eyed, and hopefully fool more people into thinking I'm actually Gordon.  Well, I am Gordon, but not the real Gordon.  I'm the Gordon who looks like Gordon.

Never mind.  You know what I mean.