I had a recommendation from a reader to devote one day a week to my other passion besides science and critical thinking -- fiction.  I thought it was an interesting idea, so we'll give a try to Fiction Fridays.  I'm planning some book reviews, excerpts, essays, and so on -- let me know if you like it!

Most of my books are about the supernatural, and some of them are intended to be downright terrifying.  Along the way I've been influenced by many superlative writers of scary fiction, so I thought I'd start Fiction Friday with a few recommendations for some of my favorite Tales of the Supernatural.  I'll be curious to see what my readers think -- and to hear what your favorites are.  Always looking for new stories to read...

I have fairly definite opinions about reading material (okay, to be truthful, I have fairly definite opinions about most things, as long-time readers of Skeptophilia know all too well).   To me, a good horror story is one that is evocative, in which there is a subtle touch – the imagination, I find, is far more powerful than the written word in creating frightening imagery.  As Stephen King pointed out in his wonderful analysis of horror fiction Danse Macabre, it's often as scary to leave the door closed and let the readers spend the rest of their lives speculating about what was behind it than it is to actually open the door and reveal the monster (and take the chance they'll say, "Is that all it was?").

This is why gruesome stories really don't do much for me.  A story about a murderer with a chainsaw might disgust me, it might incite me to check to see if my doors are securely locked, but it doesn't give me that thrill of fear up the backbone that is what I'm looking for in a good spooky story, what the Scots call "the cauld grue."  Sheer human perversity doesn't fill the bill; there has to be some sort of supernatural element, to me, for a story to really cross the line into the terrifying.  Reading about homicidal maniacs simply is neither very appealing nor very scary (however scary actually meeting one would be).

All this is rather funny, because I don't actually believe in the supernatural, and I obviously do believe in the existence of homicidal maniacs.  The fact that something that doesn't exist can scare me far worse than something dangerous that does exist is probably just evidence that I'm not as highly evolved in the logic department as I often claim to be.

In any case, if you're curious, here are my top ten choices for the scariest stories of all time.  Let's hear what you think -- if you agree, disagree, or if you were prompted to find and read any of these.  Could make for an interesting discussion!

These are in no particular order, and there are no spoilers -- just a brief idea of what the plot is.

"What Was It?" by FitzJames O'Brien.  A house is haunted by a real, corporeal creature that also happens to be invisible.  And insane.

"The Dunwich Horror" by H. P. Lovecraft.  This is one of the most eerily atmospheric stories I've ever read, about an old man obsessed with recovering ancient lost magical lore, who should have left well enough alone.  Set in the wooded hills of northern Massachusetts, it is serious nightmare fuel, and one of Lovecraft's best.

"The Mirror" by Haruki Murakami, from his collection Blind Willow, Sleeping Woman.  If I had to vote for the single best-crafted short story I've ever read, this would be a strong contender.   A group of friends gets together for an evening of drinking and chatting, and someone notices that the host's apartment has no mirrors, and asks why.  Reluctantly, he explains.  You'll see why he was reluctant... 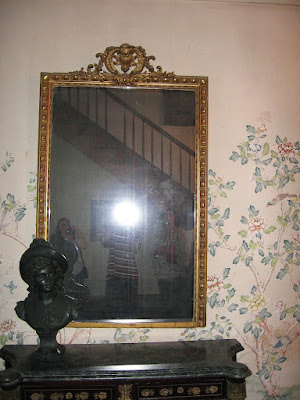 [Image is in the Public Domain]
The Shining by Stephen King.  Combines haunting with the familiar horror fiction trope of "we're all stuck here and can't get away," in absolutely masterful fashion.  Skip the movie and read the book.  You'll never look at a bathtub, or an old-fashioned elevator, or a long hotel hallway the same way again.

"Oh, Whistle and I'll Come To You, My Lad" by M. R. James.  A regrettably little-known story which is one of the flat-out scariest things I've ever read.  A British tourist finds an antique whistle half-buried in the sand on the beach, and blows it.  He shouldn't have.

"The Monkey's Paw" by W. W. Jacobs.  Embodies the old saying "Be careful what you wish for, you may get it," and is the classic example of -- literally, in this case -- not opening the door.

"Afterward" by Edith Wharton.  If this story doesn't scare the absolute shit out of you, you're made of stone.  A story about... a retroactive haunting?

"The Lottery" by Shirley Jackson.  Not a supernatural thriller, as per my original description (so sue me).  But still a classic of horror fiction.

"August Heat" by William Fryer Harvey.  What if you happened upon a stranger, a maker of marble monuments, and he was making a headstone -- with your name, and today's date, on it?

"Ligeia" by Edgar Allan Poe.  One of the earliest stories of possession.

So, those are my top ten.  Agree?  Disagree?  Any additional that you would recommend?  What stories have chilled your blood, that would be appropriate to sit in front of the fire with, late at night, when no one is awake in the house but you?