Flash in the pan

I introduced yesterday's post, about the discovery that a large percentage of the meteorites seem to have come from a single collision event in the distant past, as "a question without an answer."  Today we're going to look at another one; fast radio bursts.

They're pretty much what they sound like; quick, high-energy flashes in the radio region of the electromagnetic spectrum.  What the name doesn't tell you, however, is how quick and high-energy they are.  They have a duration of only a few milliseconds at most; there and gone faster than a camera flash.  And their energy output is enormous -- the average fast radio burst releases as much energy in a few milliseconds as the Sun does in three days.

The trouble with studying these events is that they're over before you can get your radio telescope pointed toward them.  Until recently, there had been no coordinated effort to find fast radio bursts; how can you find them if they come from seemingly random spots in the night sky?  You would have to have the radio telescope pointed in the exactly right direction at exactly the right time in order to know one had even happened. 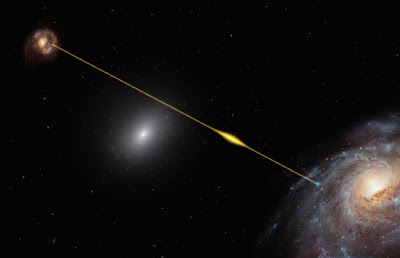 [Image licensed under the Creative Commons ESO/M. Kornmesser, Artist’s impression of a fast radio burst traveling through space and reaching Earth, CC BY 4.0]

This is why the first ones weren't even observed until 2007, and the number recorded in the fourteen years since was quite small.  But it was just announced this week that CHIME, the Canadian Hydrogen Intensity Mapping Experiment, has recorded 535 fast radio bursts in the one year of its operation -- quadrupling the total number ever detected.

"Before CHIME, there were less than a hundred total discovered FRBs; now, after one year of observation, we've discovered hundreds more," said study contributor Kaitlyn Shin, a graduate student in MIT's Department of Physics.  "With all these sources, we can really start getting a picture of what FRBs look like as a whole, what astrophysics might be driving these events, and how they can be used to study the universe going forward."
Because that's the problem with fast radio bursts; no known astrophysical process could produce such a sudden, short-duration explosion in the radio region of the spectrum.  More interesting still, the CHIME study showed that they seem to fall into two classes; "one-offs" and "repeaters."  So even if we figure out how they happen, we'll still be left with why some of them happen only once, and others seem to be on some kind of regular cycle.
The most perplexing thing about them, though, is how common they appear to be.  For something that is caused by a completely unknown mechanism, they're pretty much everywhere.  "That's kind of the beautiful thing about this field -- FRBs are really hard to see, but they're not uncommon," said Kiyoshi Masui, another study contributor, and a member of MIT's Kavli Institute for Astrophysics and Space Research.  "If your eyes could see radio flashes the way you can see camera flashes, you would see them all the time if you just looked up."
So there you have it; another as-yet unsolved mystery.  It seems like no matter where we look, there are three new conundrums for every one we solve.  It brings to mind the quote from biologist J. B. S. Haldane: "The universe is not only queerer than we imagine, it is queerer than we can imagine."