One of the more fascinating bits of biochemistry is the odd "handedness" (technically called chirality) that a lot of biological molecules have.  Chiral molecules come in a left-handed (sinistral) and a right-handed (dextral) form that are made of exactly the same parts but put together in such a way that they're mirror-images of each other, just like a left-handed and right-handed glove.

Where it gets really interesting is that although the left-handed and right-handed forms of biologically active molecules have nearly identical properties, they aren't equivalent in function.  Nearly all naturally-occurring sugars are right-handed; amino acids, on the other hand, are all left-handed.  No one knows why this is, but having evolved with this kind of specificity has the result that if you were fed a mirror-image diet -- left-handed glucose, for example, and proteins made of right-handed amino acids -- you wouldn't be able to tell anything apart by its smell or taste, but you would proceed to starve to death because your cells would not be able to metabolize molecules with the wrong chirality. 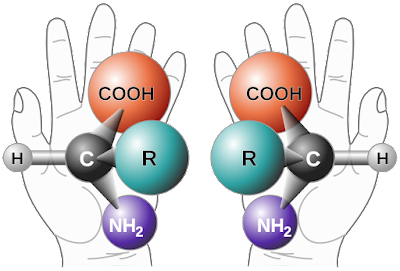 Molecular chirality was used to brilliant effect by the wonderful murder mystery author Dorothy Sayers in her novel The Documents in the Case.  In the story, a man dies after eating a serving of mushrooms he'd picked.  His friends and family are stunned; he'd been a wild mushroom enthusiast for decades, and the fatal mistake he apparently made -- including a deadly ivory funnel mushroom (Clitocybe dealbata) in with a pan full of other edible kinds -- was something he never would have done.

The toxic substance in ivory funnels, the alkaloid muscarine, is -- like many organic compounds -- chiral.  Naturally-occurring muscarine is all left-handed.  However, when it's synthesized in the lab, you end up with a mixture of right- and left-handed molecules, in about equal numbers.  So when the contention is made that the victim hadn't mistakenly included a poisonous mushroom in with the edible ones, but had been deliberately poisoned by someone who'd added the chemical to his food, the investigators realize this is the key to solving the riddle of the man's death.

Chiral molecules have another odd property; if you shine a beam of polarized light through a crystal, right-handed ones rotate the polarization angle of the beam clockwise, and left-handed ones counterclockwise.  So when an extract from the victim's digestive tract is analyzed, and a polarized light beam shined through it splits in two -- part of the beam rotated clockwise, the other part counterclockwise -- there's no doubt he was poisoned by synthetic muscarine, not by mistakenly eating a poisonous mushroom.

Turns out there may be a way to use this hand-in-glove property of biological molecules not to solve a murder, but to detect life on other planets.  As with Dorothy Sayers's synthetic muscarine, organic compounds not produced by a living thing would almost certainly be a mixture of the two chiralities, right- and left-handed.  Because organisms here on Earth are all so incredibly specific about which chirality they need (or create), it's a fair guess that living things on other worlds would have the same choosiness.  And now a technique has been developed to detect molecular chirality in the light reflected from a forest from two kilometers away, by a spectropolarimeter on a helicopter flying at seventy kilometers per hour.

It only took seconds for the detector to tell the difference between light reflected from a living thing and light reflected from something inanimate, like a rock face or an asphalt road.  Now that we're becoming increasingly good at seeing the faint light reflected from the surface of exoplanets, looking for rotation of the polarization angle of that light might be a quick way to see if there's anything alive down there.

"The next step we hope to take is to perform similar detections from the International Space Station (ISS), looking down at the Earth," said astrophysicist Brice-Olivier Demory of the University of Bern and MERMOZ (Monitoring planEtary suRfaces with Modern pOlarimetric characteriZation).  "That will allow us to assess the detectability of planetary-scale biosignatures.  This step will be decisive to enable the search for life in and beyond our Solar System using polarization."
Which is really cool, although as an aside someone needs to explain to whoever is in charge of MERMOZ how acronyms work.
In any case, the whole idea is brilliant, and the possibility that we could detect living organisms on a distant planet just by analyzing the reflected light polarization is mind-boggling.  It's long been the stumbling block in the search for extraterrestrial life; if a planet hosts life, but the living things there are pre-technological, how would we know they're there?  After all, as little as two centuries ago, intelligent aliens would have detected no radio signals coming from Earth, and (of course) we wouldn't have had the capability of detecting any they sent us.
But now, maybe we can tell if there's something alive out there without it having to communicate with us directly.  Like Dorothy Sayers's intrepid detectives, all we have to do is see if the light twists in only one direction, and it might well be case closed.