This forced me to dig up an article in Wired from all the way back in 2011 that proved to her that, unlikely as it may seem, the Brony phenomenon is real. 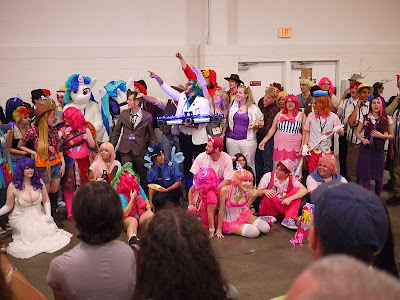 BronyCon. [Image licensed under the Creative Commons Keith Survell from USA, Bronycon summer 2012 cosplay session, CC BY-SA 2.0]
They collect action figures.  They have online discussion groups wherein they discuss the events in recent episodes with the same gravitas you would expect if the scripts had been penned by Shakespeare, or at the very least, George R. R. Martin.  They make fan art (as of the writing of the Wired article, the site DeviantArt had over 90,000 pieces of My Little Pony-inspired art; heaven alone knows how many there are now).  They went so apeshit when My Little Pony: Friendship is Magic ended its run in 2019 that EntertainmentOne and Boulder Media teamed up with Paramount Pictures to produce a full-length movie called, I kid you not, My Little Pony: A New Generation, which is scheduled to be released this September.
There is also a subgroup which apparently like to dress up as My Little Ponies and then have sex with each other.  Which I guess is harmless enough if everyone involved is a consenting adult, but open-minded as I am, I really didn't want to investigate further.
Being an author, my internet search history is already fucked up enough as it is.

Anyhow, after discussing the whole phenomenon with my friend, I got to thinking about it, and I decided that I had to see if I could figure out why this show had gained so much popularity amongst adults.  And fortunately, the article linked above has a short clip from one of the shows.  "Who knows?" I thought.  "I'm an open-minded guy, and confident in my own masculinity.  Maybe I'll be charmed.  Maybe I'll understand how some dude could get taken in by the innocent delight of entering a pastel-colored world where stories always end well."

But it could be worse.  She could have gotten me a plush toy with a voice box.  And then I might have made a deal with Satan just to get even with her.