A few weeks ago I was in my office working, and while writing on my computer I was listening to the London Symphony Orchestra (under the direction of Sir Simon Rattle) performing Igor Stravinsky's The Rite of Spring.

It's a profound, beautiful, disturbing work.  But it's not everyone's cup of tea.  My wife came in to ask me a question while it was playing, and  as she walked into my office she said, "What the hell are you listening to?"  [Nota bene: she said it with a smile on her face; it was curiosity, not criticism.  We've known for years that we have very, very different tastes in music, and each of us finds it more interesting than off-putting when the other is listening to, and enjoying, some oddball piece.]

But to say that Stravinsky is not on my wife's "favorite composer list" is a bit of an understatement.  To her, it sounded a bit like a random note generator, and definitely didn't have the thrilling impact it has on me. 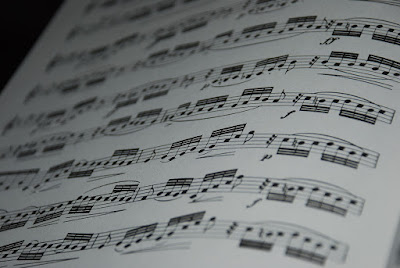 I've been curious for years about where tastes in music come from.  My own playlist is wildly eclectic; when I put my iTunes on shuffle, I can end up with musical whiplash, going from Bach directly to Nine Inch Nails.  But why (for example) does my taste differ so completely from my wife's, when in so many other ways we're similar?  I know my own preferences are for music with strong rhythms, unexpected or odd harmonies, and an emotional edginess.  ("Music with teeth," I call it.)  That's true regardless of genre.

Turns out there was a study done about this very question five years ago, led by the same person who led the research I described in yesterday's post, about the psychological effects of making music in groups -- David Greenberg, then of the University of Cambridge, now at Bar-Ilan University in Israel.  I found out about it because a friend and loyal reader of Skeptophilia read yesterday's post, and sent me an email saying, "You think that's cool, take a look at what else this guy has done," along with a link to a paper in the journal Social, Psychological, and Personality Science entitled, "The Song is You: Preferences for Musical Attribute Dimensions Reflect Personality."  The paper so directly addresses the question I've wondered about for ages that I'm kind of stunned I'd never run across it before.

What Greenberg et al. did was look at three musical attributes in pieces from various genres:

These broke down into 38 different descriptors, and the first thing the researchers did was to have judges evaluate 102 different pieces of music from various genres with respect to each descriptor.

After generating composite scores for each attribute, the 102 pieces were thrown out to a total of 9,454 participants.  Each participant gave each piece a rating, and also took a psychological/personality assessment.

Then the researchers started looking for correlations.

The results are downright fascinating, and I refer you to the paper itself for the full lowdown.  But here are a few of the connections they found:

What this study would say about my own personality, given my love for The Rite of Spring, has been left as an exercise for the reader.

I was also fascinated by their look at what personality correlates exist in people who have diverse tastes in music as compared to those who have strong genre preferences.  Apparently, we people who listen as often to metal as to classical score high in measures of openness, extraversion, agreeableness, and conscientiousness, and low in neuroticism.  So... yay?  I've always thought of myself as being something of a neurotic introvert, so I have to admit this one came as a bit of a surprise, although by my own assessment I'm pretty open, agreeable, and conscientious.  I guess on balance, this one works as well.  And despite coming from totally different genres, mood-wise there's a lot of commonality between Stravinsky and The Hu, an amazing Mongolian metal band whose song "Wolf Totem" is one of my favorite tunes to listen to while running:

So maybe the genre isn't as important as the emotional content.

In any case, I thought the whole thing was fascinating, and the entire paper is well worth reading.  Music affects a great many of us on a completely visceral level, and it's unsurprising that just about every culture in the world makes music in some form or another.  The fact that what music we respond to is a reflection of who we are is perhaps unsurprising, but it's kind of cool that we can find out a little about ourselves by looking at our playlists.