A couple of days ago, I posted a piece claiming that quantum physics (specifically, string theory) proved the existence of the Lovecraftian octopoid god Cthulhu.  Or vice versa, it's a little difficult to tell.  This prompted a loyal reader of Skeptophilia to send me a link to a site along with the message, "Cthulhu isn't the only thing that's going all 'quantum' these days!"  And as proof, he sent me a link he'd run into over at Cryptomundo called...

I wish I were making this up.  Yes, folks, we have a second contender for the most ridiculous claim involving quantum physics.  One Ron Morehead, "an accomplished author with much field experience with the Bigfoot phenomenon," has taken cryptozoology and the whole quantum-vibration nonsense and put it in a blender, and poured out something truly breathtaking. 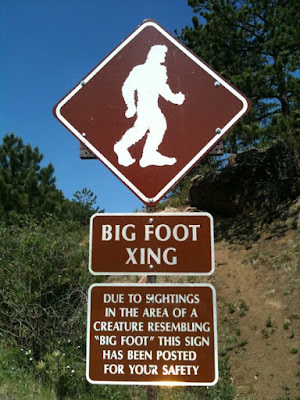 [Image licensed under the Creative Commons Gnashes30, Pikes peak highway big foot, CC BY-SA 3.0]
He starts out by suggesting that the way us regular old biologists study living creatures may not be the way to approach Bigfoot:

Researchers knock on trees, sound-blast screams and yells, or whoop all over the hillside trying to get the attention of a Bigfoot.  Professional trackers experience track-ways left by these creatures that abruptly end, highly trained dogs will not pick up the scent, or if they do they usually don’t come back.  If what you’re doing doesn’t get the results you want, change what you’re doing…it’s that simple.  Folks who claim to be researchers discount those surreal accounts that don’t fall into their preset paradigm.  Is it time to reach beyond Newtonian rules of classical mechanics, and delve into a science that was established almost 100 years ago by Einstein, Born, Heisenberg and Schrödinger?

Well, there's a reason not to, and that's that the subject of study is Bigfoot, and not Submicroscopicfoot.  Quantum theory explains phenomena that generally are relevant in the world of the very (very) small.  Quantum probabilistic effects get "washed out" on ordinary scales of time and size, just as you can discuss the air pressure inside a balloon without worrying very much about the motion of one specific gas molecule.

So right off, he illustrates that he hasn't the vaguest clue what quantum physics actually is.  But he doesn't let that stop him:

(T)he world of quantum physics has been locked in mathematics.  It’s accepted worldwide by physicists.  We don’t see it, but it’s ever present in our lives.  We get that feeling that something is wrong, the phone rings and Aunt Marybell Sue was in a car wreck.  You have a déjà vu …this has happened before.  Without knowing it, could psychics actually be relating to folks from a quantum level?

Quantum physics is a little weird, but that does not mean "if it's weird, it must be because of quantum physics."  And if Aunt Marybell Sue gets in car wrecks often enough that people are experiencing déjà vu about it, maybe it's time to take away her driver's license.

The real coup de grâce, though, comes at the end of the article. Morehead states:

Is there a race of giants that have inherited the ability to move into the macro-world with quantum physics?...  The remains of giants have been found on earth before.  Most of us know about Greek mythology regarding aliens copulating with human women who then gave birth to a half god-half human, e.g., Zeus, Hades, Poseidon, Hercules, and so on.  They supposedly had great powers and supernatural abilities.  And most of us know of the biblical accounts of the same type of cross-breeding.  If we are to believe there is a core of truth to these stories, could Bigfoot be a diluted remnant of these and have inherited some of their quantum abilities?

It's funny, I've read a great deal of mythology, and I don't recall anything about Zeus being the product of an alien having sex with a human.  You'd think that'd kind of stand out in my memory.  But if we're making shit up, may as well go big or go home, right?

The most inadvertently funny thing about the whole article, though, is when Morehead states that there is no need to defer to posers like Brian Greene and Neil de Grasse Tyson on matters of physics:

You don’t have to be a physicist to understand enough about quantum physics to realize it could very well be our answer to the understanding of how Bigfoot might operate.

Which, in one sentence, sums up the entire woo-woo worldview.  "Don't expect us even to expend the effort of reading the fucking Wikipedia page on quantum physics.  We'll just throw around some terms that are sort of science-y or something, and call it good."

And we won't even go into Morehead's further speculations that Bigfoot might be the descendant of Lucifer and the Nephilim.

So there you have it.  An even dumber claim than Quantum-thulhu.  If there's any crazier woo-woo quantum absurdity out there, like using quantum physics to explain why Tarot cards work, I don't want to know about it.  There's only so much facepalming one person can endure.