There are days that I really don't understand the human species at all.

Yes, I know I'm one of 'em.  But still.  People can be weird in ways that I find utterly baffling, and this has at times made me wonder if I'm an alien changeling or something.

The latest example of Stupid Human Tricks is courtesy of a friend and loyal reader of Skeptophilia, who sent me a link with a message that basically said, "You gotta see this."  But before I tell you about the article he sent me, I need to tell you about Harold von Braunhut.

Harold von Braunhut was, to put it mildly, an entrepreneur, and reached the peak of his productivity back in the 1970s and 1980s.  His most famous invention/scam was "Sea Monkeys," which -- if you're around my age -- will be immediately familiar, because advertisements for them were everywhere.  Here's von Braunhut's ad: 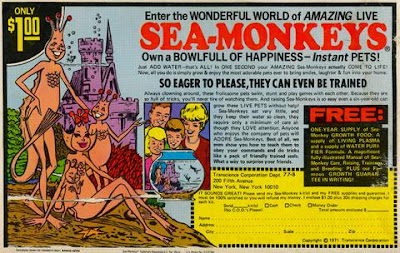 Tens of thousands of kids sent in their hard-earned dollars, and were dismayed to find that what they were sent were...

For comparison purposes, here is a photograph of actual brine shrimp: 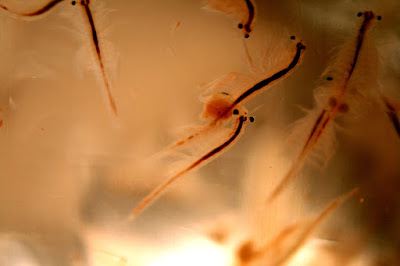 The first thing you undoubtedly noticed about them is that they look absolutely nothing like the illustration in the advertisement.  They don't have little crowns or human-like faces, they don't have long, shapely legs, and the females (whichever those are?) aren't wearing lipstick.  Plus, if you've ever dealt with brine shrimp -- often used as food animals for saltwater aquariums -- you know that they are not "instant pets... a bowl full of happiness... so eager to please they can even be trained."

But why von Braunhut's name comes up is because of another of his inventions -- if I can dignify them by that term -- the "Invisible Goldfish."  You sent him your money, and he sent you back a cheap plastic goldfish bowl, some fish food, and a handbook.  Add water, and voilà... instant invisible goldfish.  It came along with a guarantee that the fish was indeed invisible -- your money back if you ever saw him.

Now, before you start snickering at how gullible people were back then, consider the fact that just a couple of weeks ago, an Italian artist -- and I am using that word as guardedly as I did calling von Braunhut's scams "inventions" -- named Salvatore Garau just sold a "sculpture" for a cool $18,300, which is even more amazing because the sculpture doesn't exist.

The title of the, um, big blob of nothing is Io Sono, which is Italian for "I Am."  Kind of ironic, because "It Isn't."  Just like with von Braunhut's invisible goldfish, Garau's sculpture comes along with guidelines to set it up -- it must be, he says, in a five-foot-by-five-foot space, free of obstructions.

Oh, and it comes with a certificate of authenticity.  Because you wouldn't want to set up any inauthentic nothing in your house.  Just think how the neighbors would laugh.

Like von Braunhut, who was completely unapologetic about how well his business did, Garau is ridiculously serious about the whole thing, as befits a True Artiste.  And like many True Artistes, he is really good at slinging the arcane, pseudo-profound bullshit.  "The vacuum is nothing more than a space full of energy, and even if we empty it and there is nothing left, according to the Heisenberg uncertainty principle, that nothing has a weight," he said, in an interview with the Spanish news outlet Diario AS.  "Therefore, it has energy that is condensed and transformed into particles, that is, into us...  When I decide to ‘exhibit’ an immaterial sculpture in a given space, that space will concentrate a certain amount and density of thoughts at a precise point, creating a sculpture that, from my title, will only take the most varied forms."

In fact, that is not even close to what the Heisenberg uncertainty principle says.  Insofar as what Garau said has any meaning at all, he seems to be talking about vacuum energy and virtual particle pair production.  But neither of those has a damn thing to do with invisible statues, and I can nearly guarantee that Garau doesn't much understand these, either.

Most astonishing of all is that this is not the second, but the third time Garau has done this.  He has two other nonexistent sculptures, Buddha in Contemplation and Afrodite Cries.  The first is displayed (so to speak) in the Piazza della Scala in Milan, and the other in front of the New York Stock Exchange.

The latter, by the way, was supported and paid for by the Italian Cultural Institute.

You know, it's not that I don't understand Garau, or, for that matter, von Braunhut.  Once you figure out that you can sell non-existent statues and/or fish, the financial incentive has got to be pretty powerful.  The people I don't understand are the buyers.  Not only did someone buy Garau's non-statue, there was a bidding war that drove it to twice the original asking price.  I shit you not.

That, my friends, is some expensive nothing.

You know, I really think I'm missing the boat, here, working my ass off writing novels.  What I should be doing is selling front and back covers.  On the front cover would be some kind of impressive-sounding name, like The Cosmic Spirit Speaks.  Then on the back, I could have the following:

The ultimate goal of the novelist's voice is to spark the imagination, to create a new world in the mind of the reader.  When we hear that voice, it melds with our being to generate a truly fresh creation, something that did not exist before.  In The Cosmic Spirit Speaks, Bonnet has driven this generative capacity of the author-reader link to its utmost -- a story that is the product of the reader's spirit listening to the still voice of the universe, without needing the intermediary of a plot trying to force that spirit along a particular path.  The reader truly becomes the wellspring of creation.

Which is a fancy way of saying, "You wanna story?  Go write your own fucking story.  Just send me money."

Nah, probably wouldn't work.  I wouldn't last through the first television "meet the author' interview without cracking up.  And you can't sell nonexistent books, statues, or goldfish if you don't take the whole thing -- and yourself -- way too seriously.